Malaysia’s Sarawak state must hold its state elections by August 2021, with this year ruled out because of the COVID19 pandemic and Putrajaya political chaos since February.

The election is important for two reasons, and not because it’s competitive. This is the first election since Sarawak’s ruling GPS became an ally of the federal ruling coalition. GPS is actually Sarawak Barisan Nasional (BN), which was ‘rebranded’ when the federal BN lost power in 2018’s historic 14th general elections (or ‘GE14’). GPS decided the BN brand was toxic and decided that state nationalism was the way to go, thus GPS. Secondly, this is the first election led by Abang Zohari Openg, the incumbent chief minister. He became the chief minister when his predecessor, Adenan Satem, died in 2017. Abang Zohari now seeks a personal mandate at the polls.

The Players:
The GPS coalition is made up of four parties: Parti Pesaka Bumiputera Bersatu (PBB), Sarawak United Peoples’ Party (SUPP), Parti Rakyat Sarawak (PRS), and Progressive Democratic Party (PDP). But don’t let that fool you. In reality, PBB calls the shots and if it needs to, PBB can rule alone as it commands more than half of the 82-seat state parliament, Dewan Undangan Negeri (DUN). Officially, GPS won 72 of the 82 seats in the 2016 state elections (SE) and PBB won all 40 seats it contested. But there are several assemblymen whose real loyalties lie with PBB yet are members of other GPS parties.

They are in these other GPS parties because of the way state seats are distributed in coalition negotiations. Another lot of ‘direct BN’ candidates who won in 2016 are now officially PBB members. PBB can rule on its own but will not do so – the party likes the idea of heading a multiracial coalition as part of its ‘Sarawak First’ branding, which touts Sarawak as the state in Malaysia’s federation with the best ethnic and religious relations, unlike the peninsular (or ‘Malaya’ as its called in these Borneo states of Sarawak and Sabah) where the frictions between Malays and non-Malays are a central theme.

“Sarawak First” (and ‘S4S-Sarawak for Sarawakians’) is extremely popular among the polity, and state nationalism is probably even higher than Sabah, the other state with a high degree of state nationalism. This of course is tied to the historical grievances related to the 1963 Malaysia Agreement (MA63). This issue is complex and since 2018 GPS has been much more successful in forcing Putrajaya to grant it even more autonomy compared to the previous half-century of federal BN rule.

The new federal government led by Prime Minister Muhyiddin Yassin knows it cannot survive without the support of GPS’s 18 federal MPs. This has resulted in nearly a dozen GPS members appointed as ministers or deputy ministers in the federal cabinet. The latest climbdown by the federal government was very public—three months ago, PM Muhyiddin told Petronas to settle a sales tax lawsuit with the Sarawak government and to pay up nearly RM3 billion (A$1 billion) in arrears. This would not have happened under normal circumstances.

If there is one weakness for GPS, it’s the native Dayak voters. Right now, Dayak support is spread across all four GPS parties but PRS is having internal problems. A split in the party just prior to the 2016 SE led to the sacking of several leaders in 2018, including PRS’s deputy president Joseph Entulu, causing the party to lose seats in the 2018’s GE14.

Strangely, the Sarawak Governor and controversial former chief minister Taib Mahmud is not a key issue leading into the state polls. Yet he’s the most hated figure among Sarawakians over longstanding and credible evidence of kleptocracy. Truth be told, Taib’s kleptocracy is much bigger than former PM Najib Razak’s world-famous 1MDB scandal. Taib’s role cannot be underestimated. Although the Governor is supposed to be above politics, in reality he’s still a major player in PBB politics. He led PBB for 33 years, stepping down only because he wanted to be Governor. All of Sarawak’s state cabinet members were first elected when he was chief minister and he’s not called the ‘White Hair Rajah’ for nothing.

The players: Opposition
The opposition in Sarawak is split into two distinct camps. The first camp consists of ‘Malayan’ parties, namely those in the PH coalition (DAP, Amanah, PKR), and PAS. The second camp consists of Sarawak-only parties such as Parti Sarawak Bersatu (PSB), Parti Bumi Kenyalang (PBK), and the Gagasan Anak Sarawak (Gasak) coalition consisting mostly of ‘mosquito’ (tiny) parties. The big difference between the first and second camp is the degree of state nationalism. The second camp consists of parties that want complete autonomy from Putrajaya (PSB) all the way to breakaway independence from Malaysia (PBK).

But on the ground, the only parties with credibility are PH parties (DAP and PKR) and PSB.

PAS, PBK and Gasak parties are all expected to ‘lose deposit’ at the polls – the ultimate sign of negligible support. This is when a candidate cannot even get 1/8 of the votes cast in the constituency.

While DAP and PKR have been around (and successful in the 2016 SE), the talk of the town is PSB. PSB is led by Wong Soon Koh, a former GPS minister and SUPP heavyweight. It has also managed to recruit Joseph Entulu and Baru Bian, the former PKR Sarawak leader. Baru left PKR under controversial circumstances when he defected along with Azmin Ali’s group from the previous federal government, sparking the collapse of the PH coalition and its splintering. Although he quickly left Azmin’s group to join PSB, there are question marks over his political acumen. Some in the Christian community, his core support base, cannot forgive him for his role in the collapse of the federal PH government and near-collapse of PKR Sarawak.

Baru is now projecting himself as the next Dayak chief minister if the opposition wins the polls, but this is hotly contested by others, including Entulu, his party colleague.

PKR Sarawak, now led by Larry Sng, a former assistant minister in BN Sarawak, is trying to rebuild the party from the ground up. But all three of PKR’s Sarawak state parliamentarians have defected from the party, two to PSB and one to Bersatu.

There are also question marks over Larry Sng. Although his father is known to be federal opposition and PKR leader Anwar Ibrahim’s man, Larry maintains close contacts with Governor Taib Mahmud. And Wong Soon Koh is also known to have extensive links with the governor, raising questions about the real viability of the opposition. Can the opposition come together and form a loose alliance against GPS? Can the DAP leaders trust PSB and PKR?

DAP is easily the strongest opposition party. Although some in the Chinese community were unhappy with the Sarawak DAP leader Chong Chieng Jen (CCJ) when he was deputy minister in the federal PH government, now that he is back in the opposition all is forgiven. DAP’s problem is not GPS but internal friction. DAP’s Padungan assemblyman recently left the party on bitter terms, and there are burgeoning rumours that many senior leaders are unhappy with Chong. 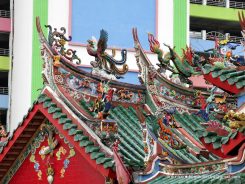 A new generation's contest over Sarawak's lost autonomy may force its GE14 voters to reconsider how today's leaders are trapped by the past.

The opposition is just too fragmented to take on GPS. Although PSB is making headway into Dayak seats, it has a problem with the narrative about putting a Dayak back in the office of the chief minister. Voters are constantly reminded that PSB is led by an ethnic Chinese who was a senior BN minister and PSB is largely made up of defectors. PSB will win several seats but nowhere near what DAP will win.

The situation on the ground may change of course over the next few months as the first quarter of 2021 is also the Lunar New Year period, a major festival in Sarawak. By mid-April to May it will be Ramadan (the Muslim fasting month) followed by Gawai Dayak on 1 June. Thus all the major voting blocs will be celebrating their festivals in the first half of next year.

Professor Chin will speak on Sabah and Sarawak politics amid Malaysia’s political turmoil on Tuesday 24 November at ANU Malaysia Institute and Sunway University’s webinar, The Borneo Dilemma: Sabah and Sarawak under the Muhyiddin administration. 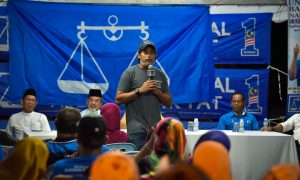 An interview with Khairy Jamaluddin

BN's former youth chief on how the party is adapting to opposition, and how it wins back power.