In Laos, the impacts of COVID-19 on human mobility are starkest in two aspects: migrant labour and tourism. The former provides vital income for many rural households, and the latter is the economic lifeblood of popular destinations like Luang Prabang.

Pick up any travel guide on Laos, and there will usually be a sentence in the introduction along the lines of “this languid, isolated Mekong backwater can sometimes feel like the land that time forgot …”

But in reality, as remote as some areas of the country may still be, Laos has been at the geographical center of sustained regional integration among the Mekong countries since the late 1990s. The fact that Laos is simultaneously remote and regionally integrated has played a decisive role in the country’s experience of COVID-19.

Lao people have on the one hand been sent home from diverse destinations for migrant workers, halting the flows of remittances that sustain many rural families. On the other hand, the abrupt, long-term interruption to international tourism, worth US$934 million in foreign exchange earnings in 2019, has had a heavy toll on this key sector of the economy. The impacts of these interrupted flows of people, those ‘going out’ to earn money on the one hand, or ‘coming in’ to spend it on the other, have reverberated through the fragile national economy. The latter is exemplified by shuttered hotels and restaurants in the usually packed tourist destination of Luang Prabang, a city that has gone into a kind of suspended animation as the pandemic runs its course globally.

As a result of border closures, halting regular commercial flights and an early nationwide lockdown in March 2020, Laos appears to have been very mercifully spared in terms of the caseload (47 cumulative reported cases by March 2021, no reported deaths, but only 115,456 tests).

The same could not be said of the economic fallout. A local tour operator told me: “At this time of year everybody would normally be busy, but look around. No foreigners at all, just a few Lao tourists and expats. Mr. Covid came to visit us instead, that’s what we say. But we’ve had only a few cases, we’ve been lucky in Laos, because there are not many people.”

Luang Prabang welcomes thousands of tourists a week over the peak season from the end of the rains in October through the first quarter of the new year, filling the town’s many guesthouses, backpacker hostels and hotels, providing work for guides, drivers and sellers of food, drinks and souvenirs. “So many businesses have had nothing to do for a whole year,” the tour operator says, “COVID sent Luang Prabang back by about 25 years. It’s like when we first got UNESCO status [in 1995]. Back then there were so few people here, just the locals, it’s gone back to that with COVID.”

Everybody out, everybody in

As Luang Prabang felt the bite of the ban on foreign tourism, the sudden reversal of another, contrasting form of mobility has had far-reaching impacts that are yet to be fully understood. The homeward journey of Lao nationals during the pandemic, according to reported figures, was little short of an exodus. Estimates of how many Lao people work overseas vary dramatically, reflecting the extent of undocumented migrant labour in the region, but UN reports suggest as many as 280,000 Lao work in Thailand alone. From March to July 2020, 120,000—130,000 migrants are estimated to have returned to Laos as a direct result of the pandemic. The true number may never be known, as many used unofficial border crossings. A survey of migrant workers returning from Thailand found that more than half had lost their jobs in the first lockdown in March 2020. Total losses of remittances, often to vulnerable rural households, are estimated between US$125-138 million.

While for Lao migrants in Thailand, the trip home was a bus journey to the nearest Mekong bridge or a boat across the river, those further afield faced greater challenges. A relatively high-visibility case was the large group of Lao fishermen stranded for months in Malaysia after losing their jobs in the pandemic. In their desperation to get home, some were detained crossing the border into Thailand, others used most of their savings for special charter flights to Vientiane.

Strict 14-day quarantine in government centres awaits new arrivals, or a number of approved hotels for those lucky enough to afford them. Occasional cases are nonetheless reported in state media, such as a housekeeper returning from Thailand via a busy Bangkok bus terminal, testing positive on return to Laos. Once people get out of quarantine, finding work even close to the wages they earned in other countries is a tall order for most. The possibility of a surge in poverty in the fallout from COVID-19, particularly due to unemployment, threatens much recent improvement of living standards and life opportunities, with risks of widening inequality.

Everyday struggles, and a reprieve for monks

As large numbers of unemployed Lao nationals made their way home to uncertain futures, the countless livelihoods that indirectly rely on tourism reeled from the ban on international arrivals. In the quiet Luang Prabang backstreets, late on a Saturday afternoon, the dream-inducing chant of monks drifts from the town’s many temples. The lack of tourists is perhaps something of a reprieve for the hundreds of monks residing in the old town, whose dawn alms-giving processions had previously drawn large crowds at this time of year: religious devotion redrawn as commodified Insta-fodder for the masses. Wat Xiengthong, one of the most important and visually stunning monasteries in the country, is usually buzzing with tour groups, guides and photographers. Instead, a smattering of tourists wander about taking selfies, while a wedding photoshoot takes advantage of the quiet.

The place to go at sunset on any given weekend in Luang Prabang is Phousi, a hill in the centre of the old town that is crowned with a historic stupa. Before COVID-19 there would be hundreds of people walking up the winding stone steps, tourists from all over the world queuing to reach the top and take in the view as the red sun drops behind the mountains. This time there is no-one on the path up, and sitting at the top are small groups of locals and weekend domestic tourists. “We like to visit here and try to support [local tourism]” they tell me, “there is no other way for them to make a living, Lao have to help Lao.”

In an attempt to shore up the industry, the Lao government and tourism industry launched a campaign in September 2020, titled ‘Lao thiao Lao’, which promotes domestic travel by publicising destinations, activities and discounted flights and accommodation.

The empty steps to the top of Phousi, normally packed with tourists on a Saturday evening before sunset. Credit: Rob Cole

A hotel worker later adds that: “It’s different in Vientiane because there are other kinds of jobs people can do, but in Luang Prabang most jobs are connected to tourism.” This is especially acute in the old town, but other parts of the city and wider province also depend, to different extents, on tourism income. As well as service providers such as hotels, bars and restaurants, the town’s famed night market sells handicrafts produced in surrounding villages of Luang Prabang province, and the morning market supplies local produce to most restaurants in town. Scores of tuk tuk and van drivers usually carry tourists around a regular list of nearby waterfalls and caves. Now they wait to be busy, a cruel predicament for those paying installments on their vehicles.

The hotel worker tells me it is certain that some of the smaller of many temporarily closed shops, bars and restaurants, will not reopen, “the owners have had to go somewhere else and find a different way to make a living.” Some believe the higher end hotels are buffered by having the backing to offer huge discounts and secure the small numbers of visitors to the town. For owners covering large overheads, this may look rather different. But there is little doubt that smaller, family owned or leased guesthouses are in a much tougher position, often receiving no customers for months at a time. Many of these were family homes before the tourism boom, now converted, rented out or sold by the owners who then moved outside the old town.

Back to the land?

A UN report on social protection in the context of COVID-19 unsurprisingly focuses on the high potential for already vulnerable families to fall into poverty, and what kinds of policy measures could mitigate this. The analysis refers to the predominantly agrarian society still found in many areas of the country, framing this in terms of the low incomes most people receive. Putting income effects aside, an important and unanswered question is the extent to which traditions of subsistence farming may still keep families afloat in adverse economic conditions, such as those induced by the pandemic. 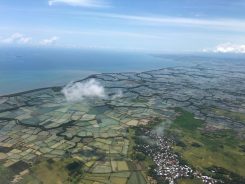 Until the very recent past, large sections of the rural population were mainly engaged in subsistence farming, combined with limited commercial activity to pay for household needs. Decades of policy targets have sought to reverse this and create a nation of commercial agriculturalists, during which pressures on the land base have also mounted.

People in Luang Prabang conveyed a sense that the subsistence safety net can still catch those brought down with the COVID crash. “Laos has few people and a lot of nature, people can plant what they need to eat here. Many people can still farm if they have no job,” said a domestic tourist at the top of Phousi. A locally-based agricultural researcher made similar points: “Laos is sometimes in a better situation than the other countries, we have not been affected like in America or Europe. People there have to stay at home but they don’t have land to produce anything for themselves like here. The impact is very bad in terms of jobs in Laos but many people can still grow something to survive.”

The sentiment of going back to rural livelihoods to mitigate the impacts of the pandemic has been expressed more widely in the Mekong countries, including in the context of closing garment factories in Cambodia . The question is: how much land is available or accessible to potentially hundreds of thousands of returning migrant workers? Or in Luang Prabang, for that matter, how much land is there for unemployed guides, drivers, hotel and restaurant staff? Can subsistence farming actually support those who have long ago moved into a different livelihood, such as tourism? Speaking with the tour operator, I find it impossible not to be struck by the smile that wrinkles his face, even as he tells me of a situation that seems pretty well devoid of anything positive. When I mention this, he tells me there’s no choice: “What can I do but smile? I have to. We are smiling because it’s the only way to fight.” 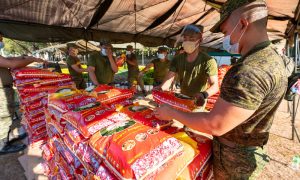 Data analysis strongly suggests correlations between COVID-19 and the commission of political violence, but the causal mechanisms driving these trends are less clear.