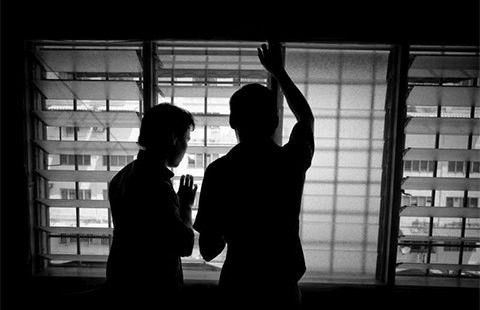 A life in the shadows? Photo by UNHCR.

Aslam Abd Jalil – in the third of a three-part series – argues that formal recognition and the right to work are two ways to assist asylum seekers in the Southeast Asian nation.

In order to solve the many and far-reaching problems faced by refugees in Malaysia two potential solutions need to be considered immediately.

The first is the formal registration of all refugees.

Supposedly, the UNHCR refugee card, giving to those registered with the UN body, acts as an identification for refugees in Malaysia and is meant to protect them from arrest.

However, it is often reported that refugees are still vulnerable to arrest and detention even though they hold these cards. This is because the refugee card has no legal value under Malaysian law.

In November 2014, in an initiative funded by the Australian Government, the Malaysian government agreed to issue refugee cards to more than 137,000 Myanmar nationals registered with the UNHCR.

Although this move should be applauded, the policy should not discriminate between refugees based on their country of origin, particularly as there are many more in Malaysia from countries like Sri Lanka, Somalia, Syria, Palestine, Iraq and Afghanistan.

These refugees face the same risks as refugees from Myanmar if they have no proper documentation that is legally recognised.

In addition, making a distinction between refugees in Malaysia is clearly a breach of Malaysia’s international obligations to provide protection to anyone who has well-founded fears of persecution regardless of their country of origin.

From the refugees’ perspectives, having proper documentation and identification means a lot, especially if they have never been formally recognised as citizens or legal persons in their own homeland – like the Rohingya in Myanmar or Hazaras in Afghanistan and Pakistan.

And with the issuing of identification cards, it is hoped that refugees would have some, although limited, access to basic services like ‘informal’ employment and healthcare.

With access to this system, refugees in Malaysia would no longer need to live in fear of arrest and detention, while authorities could monitor and enforce immigration rules more easily.

The second potential solution for Malaysia’s current refugee challenges is the incorporation of asylum seekers into the nation’s labour force through formal work rights.

Malaysia hosts a significant and rising number of semi-skilled and unskilled foreign workers. In 2014, official data recorded that of a total 6 million foreign workers, only 2.9 million were legal.

The reliance on cheap foreign workers of course needs to be reviewed. However, in the meantime, refugees’ skills and resources can be utilised by giving them the right to work (something which they currently don’t have).

The available potential human resource refugees represent will be wasted if they are not allowed to work. If given proper training and work permits, refugees would contribute far more to the economy than what they do at the moment.

In 2013, the Malaysian Government announced that it would issue work permits to refugees living in Malaysia. The then Home Minister Ahmad Zahid Hamidi also said that plans to provide training and jobs had been devised by the Ministry of Home Affairs in cooperation with UNHCR and the Immigration Department.

However, to date no work permit has been issued. And since there is no possibility of a work permit, refugees are mostly involved in the informal sector of Malaysia’s economy.

This in turn erodes the wages of both foreigners and locals because underpaid and exploited refugee workers give downward pressure on the overall wage level.

In another interesting development, Malaysia’s courts also seem to be on the side of the country’s asylum seekers when it comes to the right to work. In the 2013 case of Ali Salih Khalaf vs Taj Mahal Hotel, the Industrial Court Kuala Lumpur, ruled that Ali Salih Khalaf was unjustly dismissed and that refugees are protected under the Industrial Relations Act 1967.

This was on the basis that no human being should ever be illegal, and that refugees also need to have the means to earn a living for themselves in order to survive.

Finally, if asylum seekers are given employment rights, they will become self-sufficient and this means that they do not have to rely on charity. Work rights also gives them some level of dignity, as it means they have the capabilities to both contribute to society and to be independent.

Even though Malaysia is not a signatory to the 1951 Convention Relating to the Status of Refugees and its 1967 Protocol, that does not mean that nothing can be done to protect the country’s refugees. The UNHCR representative in Malaysia, Richard Towle once asserted that the ratification of the convention is the ideal goal, but there are other areas that can be looked at in managing refugees.

With the recognition of refugee status through formal registration, Malaysia’s immigration personnel could easily identify who are refugees, avoiding any arbitrary arrests among this vulnerable group of people.

Employment rights on the other hand will be a good initiative to enable refugees to be incorporated into and contribute productively to the economy. This also means that refugees could be independent, and have a greater say and way of ensuring their survival in this foreign land.

This is the third article in a three-part series on Malaysia’s treatment of refugees and asylum seekers. Read the first article here and the second article here.