The first in a two-part series, this article gives an introduction and translation of a 16th-century Sufi poem by Hamzah, one of the greatest poets in the Malay language. The second article in the series will offer an in-depth commentary on the poem's symbols and references.

Islamic mystical poetry, also called Sufi poetry, is one of the best-known forms of Islamic literature. The works of Jalāl al-Dīn Rūmī (1207 – 1273) are among the most popular poems in history, and the influence of Sufi literature on Persian, Indian, and Southeast Asian Islamic writing has been profound. Sufi poetry is admired for its beauty and for its exploration of mystical experience through metaphor. This kind of literature is most closely associated with the Persian language, but Sufi poetry also flourished in Arabic, Turkish, and, as we will see in this article, Malay. Sufi poetry exhibits a number of key concerns and images that reflect its mystical orientation. Its major theme is the direct spiritual encounter with God, in which the individual’s ego is annihilated (fanā’) as it achieves union (waṣil) with the permanence (baqā’) of the divine. There are conventional poetic metaphors to express being in the state of mystical union: being a drop of water in the ocean, being in love, and being intoxicated.

The precise nature of this mystical union has been a source of disagreement among Muslims, particularly between the followers of the Sufi philosopher Ibn ‘Arabī (1165 – 1240) and his orthodox detractors. Poets like Rūmī expressed, in an artistic manner, a view resembling ‘Arabī’s doctrine of the Unity of Being: roughly speaking, the view that existence is a property belonging only to God, and so God is present in all Creation. According to ‘Arabī, created beings do not have existence in their own right, but reflect the existence of God like a mirror reflects light.

For the Sufi poets, mystic union is the process of recognising that God is within the soul; thus, union with God is the recognition of unity with God. This recognition is the essential theme of the work of a Sumatran Sufi whom many consider to be the greatest poet in the classical Malay tradition: Hamzah of Barus (in Arabic, Ḥamza al-Fanṣūrī).

Hamzah’s biography is not known in any great detail. It is clear that he was active as a poet and a religious leader around the late 16th and early 17th centuries, and that he came from the town of Barus on the west coast of Sumatra. Barus was a port town that was well-connected to the Indian Ocean trading routes; it was world-famous for the high-quality camphor it exported. Hamzah is largely known from his literary output, which includes just over thirty poems and a number of prose treatises on mysticism. He had a transformative impact on Malay literature; according to the literary critic Vladimir Braginsky:

It is Hamzah who was the first poet to challenge the anonymity of Malay literature, who introduced the main genre of its classical verse, syair, who became one of the originators of religio-mystical writings in Malay and of the Malay-Persian literary synthesis, who initiated a poetical school that influenced the entire Sufi poetry of the Malays.

A South Sumatran tree-bark manuscript of the “Poem of the Boat”, a Malay Sufi poem in the tradition of Hamzah; MSS Malay A 2 (Photo: British Library)

Hamzah was regarded as the foremost mystic of his generation. Each of Hamzah’s syair poems ends with an autobiographical stanza, and in several of them he claims to have accomplished the Sufi goal of fanā’; that is, annihilation of the self and a recognition of unity with God. He was a major influence on Syams al-Dīn, who was the official Sufi master to the great Sultan Iskandar Muda of Aceh (reigned 1607 – 1636). After the Sultan’s death, Hamzah’s work became the target of a polemic by the orthodox Gujarati cleric Nūr al-Dīn al-Rānīrī, who argued that Hamzah’s poems were heretical because they implied that humans are of the same nature as God.

Below is an example of Hamzah’s poetry. The Malay text is based on L.F. Brakel’s edition, posthumously revised and published in 1986 by G.W.J. Drewes. The rather free English translation is mine. I have converted the irregular tetrameter of the Malay into stricter iambic tetrameter in English, but have not followed the repetitive AAAA rhyme scheme of the original. Hamzah’s Malay is dense with Arabic loan words and phrases, which are italicised in the text, and he is renowed for his intricate punning between the two languages.

The poem tells the story of a “peculiar whale” who looks for water in the desert, even though it lives in the sea. The sea is a standard Sufi metaphor for the divine being, while the whale represents the spiritual seeker. Hamzah satirises people who try to find God outside of themselves, such as by pilgrimages to the distant Middle East. In line with the doctrine of Ibn ‘Arabī, Hamzah argues that we are always already at one with God, and our task is to recognise that truth by renouncing worldly distractions and giving up our attachments to ego. The extensive allusiveness of the poetry displays Hamzah’s familiarity with the cosmopolitan worlds of Arabic and Persian literature, as well as a distinctively Southeast Asian perspective on the Sufi experience.

See part two of this series on Hamzah’s poetry for a detailed commentary on this poem.

More Perspectives on the Past at New Mandala 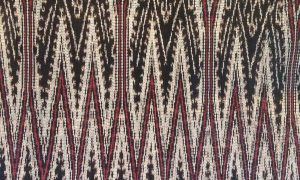 A historically-focussed review of the AGNSW's Passion + Procession: Art of the Philippines exhibition.