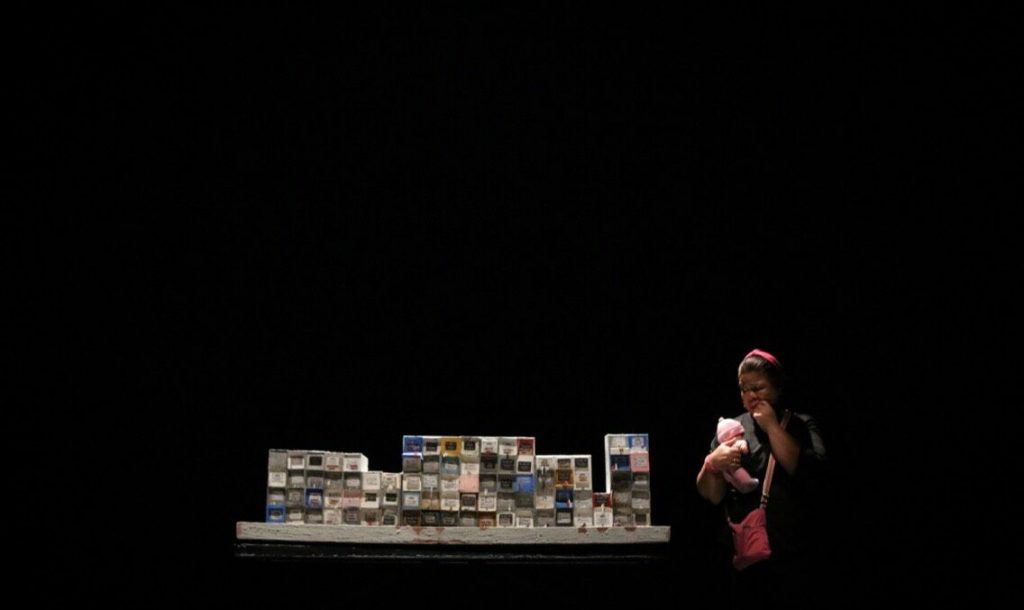 I lived in Davao City almost all my life. I grew up listening to then-mayor Rodrigo Duterte in his Sunday morning show, who only had harsh words against drug addicts whom he considers of the be bane on social order.

Now that Duterte is President, watching Duterte has become a national experience. His late-night speeches feature flowcharts and photos of suspected drug lords and an occasional threat of “I will kill you” to crack heads.

Duterte, however, is not the only important voice in the country’s bloody war on drugs. The four-part monologue Tao Po (Is Anybody Home?) reminds us that there are more voices to be heard. These voices are not at the podium facing cameras, but voices at the forefront of the state’s anti-narcotics campaign.

Thespian-activist Mae Paner lends her voice to deliver the story of the people entangled in this war by choice or by circumstance—a photojournalist, a Zumba instructor, a killer cop, and a child.

I found the second part to be the most harrowing monologue as Paner performs the role of a Zumba instructor confronted by the ghosts of her husband and son, killed in the drug war. The anguished widow recounts scenes leading to their deaths and reveals the emotional and financial costs of their passing, while putting on an energetic Zumba session as one way to earn a living.

Not all the monologues are told from the point of view of the drug war’s fallen and their families. In the third monologue, the voice of a police officer takes centre stage. In many ways, he echoes the values and beliefs of most who support the drug war. But living a double life as a hired killer, he is doubting his role’s effectiveness in the drug war as he ponders the reality that the big fish, like drug lords, are spared from the killings.

Tao Po reaches out to a diverse audience. Those who oppose the drug war will find resonance in what is, for me, one of the key takeaways of the play—that one innocent death is just too many to accept.

Thinking of the supporters of the drug war, some questions I asked at the end of the play were: How do supporters feel about the collateral damage, the loved ones of those left behind like the Zumba instructor? What do supporters think of the inner conflict in the police officer about his role as hired killer that is enabled by public support to carry out extra-judicial killings?

The drug war is a divisive issue in the Philippines. We need platforms like Tao Po that can confront the high approval on the war on drugs in the country. Through these raw and conflicted stories based on real lives in the drug war, I only hope that more minds will be opened to consider other ways of solving the drug problem.