In today’s Sydney Morning Herald article, William Pesek (Bloomberg) has some interesting observations about the challenges faced by Yingluck in the coming months. He notes:

The trouble is, Yingluck, 44, still must overcome resistance from Thailand’s military, which is as coup-happy as they come. She must do the same with the courts and the bureaucracy as she tackles the prickliest issue of all: when and how she moves to return her brother Thaksin to the nation he’s been trying to run from afar in self-imposed exile.

That’s the real issue, and Thais will be assessing the risk that Yingluck moves too fast to repatriate her brother. Protesters and the military would snap into action and thrust Thailand back into crisis.

Much is forgiven when an economy scores high growth rates. In 2010, Thailand grew the fastest in 15 years. Yet stability matters, too. The longer Thailand goes without it, the further it falls behind China. Just a decade ago, Thailand was a democratic oasis in a region of autocrats. Today, it’s a political basket case.

Reflecting on Thaksin’s record, he notes:

It’s easy to forget how billionaire Thaksin bent Thailand’s leadership apparatus – the courts, bureaucracy and the military – to his will to benefit his business interests. Shares in the family media business, Shin Corp, surged after Thaksin’s sister won the election – it’s thought he will be calling the shots again, which would be great for Thaksin Inc.

If Thailand had built a robust political system, one where independent bodies existed to uphold its legitimacy, this would be dismissed as the stuff of conspiracy theories. Only it’s clear that Thaksin used his power while in office from 2001 to 2006 for personal gain.

It’s not a coincidence that Thailand has slipped to 78th among the 178 countries in Transparency International’s corruption perceptions index. In 2001, it ranked 61st.

There will, of course, be ongoing debate about the legacy of Thaksin’s term in office, but citing [only two figures from] Transparency International’s corruption perceptions index [for 2001 and 2010] is misleading. Here are Thailand’s rankings from 1999 to 2010 (a lower ranking is better):

It’s not hard to see where the big fall in Thailand’s international corruption perceptions ranking occurred.

This will be an interesting indicator to watch in the coming years.

UPDATE 10 July 2011: I have been told that my statement (“but citing Transparency International’s corruption perceptions index is misleading”) could be interpreted as suggesting that the index is itself misleading. That is not my intention and I have inserted clarifications above.

Also, as suggested by Bangkok Pundit on Twitter, I have prepared the following chart of the actual corruption perceptions index scores for Thailand (higher scores indicate less perception of corruption). 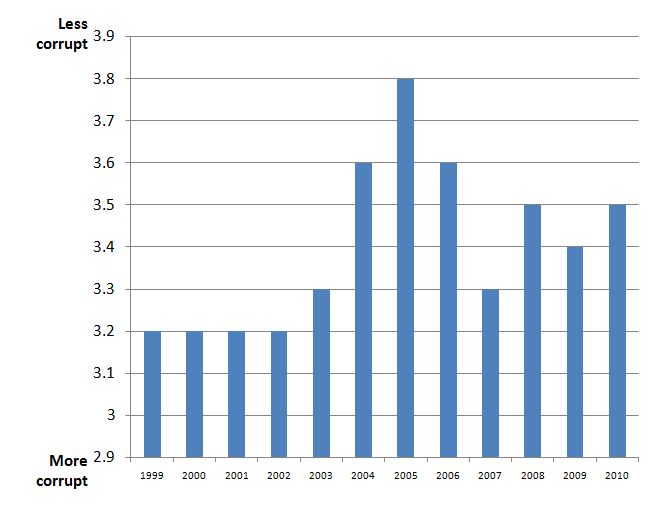