The rising wave of peaceful protests in Thailand has reached a critical juncture where the state’s response will determine whether another event of mass bloodshed is written into Thai history—the latest in a lineage of protests such as 14 October 1973, 6 October 1976, May 1992 and May 2010.

Following an incident where a royal motorcade passed through protesters, and then clashes between opposing groups of protesters on 14 October, General Prayut Chan-ocha declared a ‘severe’ state of emergency in Bangkok. The Decree bans gathering of more than five people, and prohibits the publication of news that could “create fear” or “affect national security”. The Decree also gives authorities the power to arrest and detain anyone on suspicion of causing unrest. This was followed by a second Decree which extended the emergency until 13 November 2020. Shortly after the Decree came into effect, police retook a protest site at Government House, dispersed the crowd and apprehended 28 people. From 13 to 18 October alone, at least 80 people have been arrested, according to Thai Lawyers for Human Rights.

The wider crackdown came on the evening of 16 October when police used high-pressure water cannons to disperse largely young democracy activists in Bangkok. Police later disclosed that the water was mixed with chemicals that cause skin irritation. Bodily injury from such methods could be much more serious than merely skin aggravation however, as seen in the case of a protester in Germany whose eyelids were torn, eye lenses permanently damaged and bones fractured, causing his eyeballs to fall out of their sockets. The usage of cannons against peaceful protesters was criticised for violating United Nations guidelines and as an unnecessary and disproportionate exercise of force against peaceful protesters.

16 October marked a moment of awakening, leading many more to come out and lend support to the pro-democracy movement. Concurrent protests mushroomed in various locations in Bangkok and across the country, with movements appearing to grow more numerous and even more prepared to fend off authorities. Despite the announcement of a one-day break on 20 October by protest leaders, independent protests still went ahead on the streets.

The increasing momentum of the demonstrations is clear, reflected in mobilising strategies to expand the movement beyond the key protest group, คณะราษฎร 2563 (Khana Ratsadon 2563/the People’s Party), to include ราษฎร (Ratsadon/people) where ‘everyone is a leader’ (เพราะทุกคนคือแกนนำ). Large demonstrations, organised at short notice and with a high level of spontaneity and fluidity are now dubbed as ‘organic mobs’ with no apparent leaders, key speakers or permanently fixed locations. This represents a further break from the past, especially when compared with protests by the red and yellow shirts, and the People’s Democratic Reform Committee (the PDRC) whose mass mobilisation was organised around certain key individuals.

This new form of rallying will be difficult for the Thai state to suppress, escalating the necessity for the government to peacefully engage with protesters for two reasons. First, the protesters’ new tactics will keep authorities guessing. For instance, in anticipation of a likely protest, the police closed off a street that in the end was not used by protesters at all. In another instance, water cannon trucks were sent to a potential protest location only to find protesters had met elsewhere. Second, the arrest of prominent protesters with hopes that the gatherings will die down are likely to be ineffective. In fact, such arrests contribute to growing activism. This is demonstrated by protesters’ demand to “release our friends” (ปล่อยเพื่อนเรา).

The government has largely focused on suppressing the protests, even while this is counterproductive. Besides the arrests, mass public transport infrastructure was shut down. Authorities also investigated suspending media broadcasts covering the protests and communication platforms used to coordinate demonstrations. Although the government lifted the emergency Decree on 22 October, more is needed to address grievances built up over years of military rule. It is not too late for the government to rethink its response to pro-democracy demonstrations and avoid any further violence against peaceful protesters.

Observers are beginning to compare the current heightening tension between pro-democracy activists and conservative forces to 6 October 1976, which ended in a massacre of students in which right wing civilian groups participated. Fast forward to October 2020, tensions are growing once again as student activists and conservative groups with clashing demands mobilise simultaneously. On 28 October, a former yellow shirt leader called for a coup to set up a national unity government, a move that pro-democracy activists made clear is not acceptable.

It will be difficult for yet another coup to succeed as Thai youth will not back down so easily. A violent repression of peaceful protests will severely delegitimise the government in the eyes of a significant portion of the Thai public, as well as the world watching. But the risk of violence cannot be completely ruled out, as history reminds us.

To prevent history from repeating itself, the only option is for the government to set up a safe space for public debate where clashing views on democratic governance are deliberated, challenged and peacefully resolved. Meaningful and inclusive dialogue could go a long way to prevent future violence, by bringing together people in an already deeply polarised society. During extraordinary parliamentary sessions on 26 and 27 of October, the government expressed support for constitutional amendments to be finalised by December—this may be a final and quickly dwindling opportunity for it to de-escalate tensions. 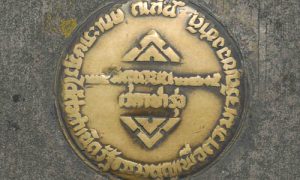 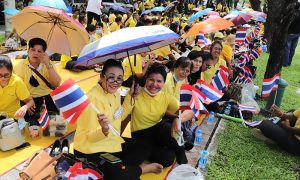 Division and unity: anticipating the regime’s response to Thailand’s protests

Pro-democracy groups have taken to the streets in the past, only to see agents provocateurs and royalist reactionaries mobilised to generate confrontation and violence.