Bangkok had already been under an emergency decree due to COVID-19. But in the early hours of 15 October, Prime Minister Prayuth Chan-ocha responded to the protest by tens of thousands laying siege around Government House by raising the emergency decree to the level of ‘serious’. Shortly after, police forcibly dispersed the crowd. Later that day, soldiers marched into parliament to provide ‘security’. The government began shutting down some news outlets as well as websites. All resembles the coup Thais experienced back in 2014 when Prayuth was the army commander.

The government claims that escalation is necessary to maintain peace and order, especially after the incident on 14 October, when the royal motorcade deliberately drove through the protest to the jeering of many protesters. The government and many right-winged media have for months been trying to portray protesters as radical republicans or even gullible anarchists who wish to demolish the establishment out of ignorance.

Contrary to such a smear campaign, those who join the protest may be the only hope for Thailand’s ailing constitutional democracy.

Since the constitution’s conception in 2017, Prayuth and his men have deliberately undermined the credibility of the law. Shortly after the 2016 constitutional referendum, Prayuth ordered an amendment to the constitution per King Vajiralongkorn’s request in order to provide the monarch more leeway to intervene in politics. The post-referendum amendment clearly showed that Prayuth never really cared about the sovereignty of the people.

Prayuth then repeatedly exercised dictatorial power to give himself leverage in the heavily rigged 2019 election. He ordered the election commission to gerrymander and postpone the election date until his party was ready. The sham election allowed him to transform from a junta leader to a farcically elected autocrat.

The 2017 Constitution was drafted under the guise of an obsession with clean politics. It subjects politicians to a list of do’s and don’ts, with severe punishments, in order to keep their behaviour in check. Prayuth’s civilian government, however, has been rife with scandals. Prayuth appointed a former drug dealer who had been jailed in Australia to his cabinet. The cabinet omitted the oath of allegiance to the constitution. Rogue government MPs have obstructed the working of parliamentary committees. When the government lost the vote on a budget bill, they blatantly demanded another vote until they won. These acts are not simply constitutional hardballs which are still within the perimeters of what is permissible. They are clearly in violation of the supposedly supreme law. Prayuth’s cabinet is seemingly immune to constitutional provisions. All constitutional mechanisms, sanctioned by Prayuth himself, instead facilitate his power.

The two most serious scandals which ignited the public’s anger against the administration were the dissolution of the upstart opposition party, Future Forward, and the murders of dissidents. Future Forward, with its anti-military ideology, was harassed by ‘lawfare’, a barrage of ridiculous lawsuits that eventually led to its dissolution and a ten-year ban from politics for its executives. Here, the constitution became the basis for harassment that has taken away the hope of millions of Thais.

Although Prayuth claims that democracy has returned, critics of the government still have to live in fear. Police and soldiers often “drop a visit”, an intimidation tactic indeed. Some activists have been physically assaulted, with the police refusing to investigate. But more importantly, there has been a series of abductions and murders of dissidents in exile. Corpses show up in the Mekong River, manifesting the horror of the Thai state. The latest was the case of Wanchalerm Satsaksit, who was kidnapped from his residence in Phnom Penh and possibly strangled to death while still on the phone with his sister. That was the last straw. People were furious. What is the use of a constitutional guarantee on rights and liberties if people can still be killed in plain sight and murderers let off with impunity?

The protesters’ demands sound unbelievably simple. They ask for the government to stop harassing people and amend the constitution. They also ask for the monarchy to restrain itself within constitutional limits. While there are definitely many people who would not mind a Thai republic, so far protest leaders have kept their demands within the scope of a constitutional monarchy: that the new constitution should be consensual, that it must be respected, and all people are equal under the law. These demands could halt the rot and keep the spirit of constitutional democracy alive, albeit just barely—another coup could be approved at any minute.

Many Thais are still buying into right-wing propaganda promoting hate and fear. It is understandable that some may be frightened by the above demands, which paint a brave new world so different from what Thais are used to. But that brings up one nasty question. If Thais are afraid of constitutional democracy, what kind of regime have we been living in? 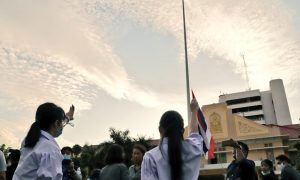 Modern techniques to block online criticism of Thailand's monarchy are paired with the familiar stirring of royalist-nationalist sentiment.