At Khon Kaen University in Northeastern Thailand, students leave bottles of red Fanta by a long bridge with white railings. According to some communicants, the drinks are offerings to the ghosts of the Thammasat University students murdered in the 6 October 1976 massacre.

Despite the best attempts of authorities to disappear the events of 6 October 1976, traces linger on in the Thai memory. Now the music video for the extraordinary Rap Against Dictatorship song “Prathet ku mi” (“my country has…”) has torn open the most sensitive wound of Thailand’s past for a new generation.

Uploaded on 22 October, “Prathet ku mi” notched up 17 million views in its first week. On the 29 October it reached 21st position on YouTube’s Trending page, a list that seldom features content from outside the United States. If the video remains online, it has a good chance of becoming Thailand’s most watched YouTube video, thereby overtaking two Isan indie songs: Zach Chumphae’s “Kham phaeng”—currently 450 million views—and Korng Huairai’s “Khu khorng”—currently 400 million views. That would be an amazing achievement in a society that discourages criticism and promotes seniority and conformity.

Filmed in black-and-white by Teerawat Rujintham, ten young male rappers take turns describing what is wrong with their country. A slowly revolving camera shows the first eight declaiming in turn before an applauding crowd. There is a short solo on a guitar emblazoned with the Thai flag—the music video’s only use of colour. Then the camera draws back to reveal that the crowd are actually cheering on a man using a chair to bash the distended corpse of a student hanging from a tree. This is a re-enactment of the infamous scene from the 6 October 1976 that was captured in a Pulitzer Prize winning photo by Neal Ulevich.

What makes this song so unique is the number of barbs directed at the military. One verse ends with: “The country where both sides fear the army”. Other lyrics include: “Parliament house is the soldiers’ play yard. The charter is written and erased by the army’s boots”, “Even the Prime Minister is still picked by the army”, “The country that fucks the law with machine guns”. Apart from brutal lyrical honesty, the most surprising aspect of the song is that most of the ten do not cover their faces. While they use aliases in the video description, a brief perusal of these names reveals further satirical protest rather than disguise. Lady Thanom and Gentle Prapas are, for example, the dictator Field Marshal Thanom and military strongman Praphas Charusathien, whose imminent return after three years of exile sparked the Thammasat student protests. HomeBoy Scout and Kra-Ting Clan refer to the murderous Village Scouts and Red Gaurs. Kitti Lamar Wuttoe is Abbott Kittisak Kittiwuttho who declared that killing communists was not a sin. The names are a list of those responsible for the massacre at Thammasat University in 1976. Thus, the music video accomplishes what the Thai education system cannot, since school history textbooks do not include the events of 6 October.

Lyrically, the song is well-crafted and poetic, yet uncompromising in its rage against Thailand’s elite. It is no accident that it begins by referencing the case of construction tycoon Premchai Karnasuta, who was caught in February 2018 killing and eating a rare and protected black leopard. In 1973, during the dictatorship of Field Marshal Thanom Kittikachorn, a deadly helicopter crash in the Thungyai Naresuan park revealed the mass hunting of endangered animals by high ranking officials. The public outcry contributed to Thanom being ousted. Other issues cited include the extensive watch collection of Deputy Prime Minister General Prawit Wongsuwan, and the Treasury Department erecting luxury accommodation for judges on the sacred mountain Doi Suthep. The red shirts and yellow shirts are referenced impartially: “The country where politics is split into two sides, the country whose citizens are divided in two, the country whose people are killed on both sides.”

Ever since the king of luk thung Suraphon Sombatjaroen was murdered in 1968 after refusing to play a concert for a high ranking army officer, Thai performers have been shy of taking on the military. Thousands of songs praise the courage of average Thai soldiers, but almost none have tackled the army’s role in restricting democracy and spreading corruption. “Prathet ku mi” targets celebrities who support the military regime: “The country where artists pretend to be rebels.” The regime began co-opting musicians immediately after the 2014 coup with Prayut’s program of “Returning Happiness to the People”, including free luk thung concerts by performers such as Bor Annop and Nim Khanuengphim. In June 2016 the Electoral Commission’s “7 August, Be United” song to promote the referendum featured Isan indie star Korng Huairai warning his fellow Isan people not to “let anyone mislead your way. Be conscious and use your judgement. Don’t let anyone trick you.” More recently, celebrities, including singer Cherprang Areekul, the frontwoman of girl group BNK48, and Isan actor Nadech Kugimiya, lined up to host episodes of the government show “Walk Forward Together Thailand.” Then, last week, one of Thailand’s most established and best-known rapper, Oui from the group Buddha Bless, criticised RAD for their “novice political views” and “legal violations”, saying that “freedom of expression should not be limitless, and there should be a boundary beyond which one should not cross”.

From 2014 to 2016 the almost solitary voice of musical protest belonged to the group Faiyen, who had been forced into penniless exile. Faiyen maintained the rage with regular releases and uploads, but a lack of funds and an amateurish musical sensibility meant that their message was never going to cut through to the main populace. Their chilling version of the “Hanging Tree” song from The Hunger Games, evocatively titled “Ton makham (Tamarind tree of) Sanam Luang”, attempted to educate Thailand’s youth on the horrors of 6 October but received only a few thousand views.

In contrast, the first five days after the posting of “Prathet ku mi” saw a firestorm of feedback with over 70,000 comments posted on the YouTube video. As of 2 November, the song has 880,000 likes and 22,000 dislikes—an extraordinary ratio of 40 to 1 (10 to 1 is more usual for a video with political content). It is currently the most downloaded song on the Thai iTunes chart. Yet Rap Against Democracy turned off comments on the video after consulting with Thai Lawyers for Human Rights, on the grounds that several comments violated the law. Considering the fury poured out in those comments—with hundreds deploring the Computer Crimes Act and the threat of five years in jail for anyone sharing the video—turning off the comments may have been a wise decision. Still, it drew criticism from Faiyen’s Nithiwat Wanasiri, who posted on Facebook: “Which human rights lawyer taught you to use the power of censorship to restrict others’ freedom?” As a scholar, I can only hope that Rap Against Dictatorship preserved such a historic forum before they closed it. 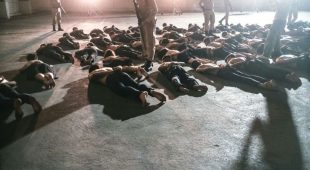 Film review: By The Time It Gets Dark/ดาวคะนอง

Anocha Suwichakornpong's new film haunts long after the credits are over.

The key point of the music video is that a society must confront past evils in order to break the cycle of violence. Yet the junta’s immediate response to “Prathet ku mi” was to threaten the creators, their families and anyone sharing the song with prosecution under the Computer Crimes Act. The regime’s new spokesman, Buddhipongse Punnakanta, suggested that foreign powers and the enemies of Thailand were behind the music video. The former leader of the anti-democratic People’s Democratic Reform Committee, Suthep Thaugsuban, wrote on Facebook that the rappers “were born Thai, but they express themselves in such a disgusting, abominable way where they aim to destroy their own homeland”. These two former Democrats politicians supplied the same kind of rhetoric that led to the Thammasat University massacre.

Unlike in October 1976, and fortunately for the young rappers, the Rap Against Dictatorship protest is not bound by location or time. It is available to be viewed by anyone with an internet connection. Hosted by YouTube, an organisation outside Thai government control, the video cannot be removed, unless the owners choose to do so or the government removes local access to YouTube—an act that would have serious economic and diplomatic repercussions.

Thailand watchers have long wondered where the political spirit of young Thais has gone. Now there are signs that the younger generation is tiring of life under the thumb of the military. A new Thailand needs a new generation who are willing to speak the truth and confront the misuse of power by the elite. In “Prathet ku mi”, Rap Against Dictatorship have reminded everyone that in 1976 young people attempted to speak out—and that their voices were brutally silenced. 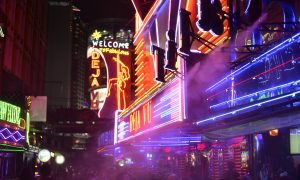 The raid against Victoria’s Secret was orchestrated by a group within the state that is opposing the growing influence of the Kampol–Chai–Somyot network.