"Secretary Kerry Meets With Acting President of the Cambodia National Rescue Party And the Country's Opposition Leader Kem Sokha" by USEmbassyPhnomPenh is licensed under CC BY-ND 2.0

The Cambodia dilemma: foreign affairs and human rights in tension

The European Union and the United States face a Cambodia dilemma. Being hard on Cambodia forces Phnom Penh to further align with China – a broader global trend Europe and the US seek to prevent amid China’s ascent as a global power. However, implementing soft measures only fosters the rise of authoritarian states in Southeast Asia. So, what should be done?

Since the European Union began a process of withdrawal of Cambodia’s Everything But Arms (EBA) trade status — in November 2018 and decided in February 2020 to partially suspend Cambodia’s trade privileges under the EBA scheme, two conflicting narratives have emerged.

For the EU, it kicked off the EBA suspension process because the bloc perceives that Cambodia, a beneficiary of its EBA trade scheme, violates human and labour rights. In particular, the EU is of the belief that Cambodia’s democracy has declined after the unprecedented crackdown on freedom of the press and on the opposition group. The trade sanctions it imposes on Cambodia are intended to reverse the latter’s drift away from democracy.

For Cambodia, however, the EU’s EBA measure demonstrates two things. Firstly, the Cambodian government considers the EU to be interfering with Cambodia’s internal affairs. The dissolution of the Cambodia National Rescue Party (CNRP) was, the government argues, the implementation of the law in a sovereign state: Cambodia is simply implementing the rule of law in its own country. According to this argument, this opposition party  was dissolved by the Supreme Court in November 2017 because it was convicted of espionage and colluding with foreign powers (the United States, in particular) to topple the legitimate Cambodian government.

Secondly, to Cambodia, the EU’s partial withdrawal of its EBA scheme is seen as a double standard. If the EU really cares about human rights, the Cambodian government argues, why would it forge trade agreements with Vietnam, which Human Rights Watch has identified as having an “appalling” human rights record? Why does the EU not impose trade sanctions on countries with a deteriorating human rights record such as the Philippines? Why Cambodia?

As for the United States, its ties with Cambodia have worsened since 2017 when Phnom Penh decided to cancel joint Angkor Sentinel military exercises in January 2017. Following the dissolution of the CNRP, the US has cut aid to Cambodia, imposed visa sanctions and frozen the assets of several of Cambodia’s senior military officers and tycoons who have close ties with the ruling CPP. Although now both countries are working to mend their relations, it remains unclear how this détente will last in the face of the COVID-19 pandemic, Cambodia’s apparent descent into authoritarianism and US President Donald Trump’s “America First” policy.

Consequences of the conflicting perceptions
The conflicting perceptions held by Brussels and Phnom Penh over the human rights situation in Cambodia prevent the two sides from having constructive and meaningful dialogues to resolve their differences. Failure to reach an agreement has significant implications for the short- and long-term future. In the short term, Cambodia will not reverse its democratic drift despite mild sanctions from the EU and the US. The Cambodian government has been led by Prime Minister Hun Sen for over three decades and has reached a point of no return. It now seems that its main political agenda is to sustain the regime, eliminate opposition and consolidate power by continuing to clamp down on dissent. The same strategies will likely be used for the next election in 2023. If they succeed, it will only help to strengthen the rise of sophisticated authoritarianism in Southeast Asia, perfectly reflecting the domino effect the United States tried to prevent from spreading in the region half a century ago.

In the long term, the EBA suspension is more likely to push Cambodia further into China’s orbit, the implications of which is less certain at this stage. However, with speculations that Cambodia signed a deal with China to allow the latter military access to a naval base in Sihanoukville province and that China is likely building dual civil-military airports in Koh Kong and Koh Rong, the stakes are high for peace and security in the region as well as for the global balance of power.

So far, there have been ongoing rumours surrounding this issue and the accusations have, unsurprisingly, been denied by both Cambodia and China each time they were made. However, given Cambodia’s close alignment with China and China’s increased engagement with Cambodia before and amid the COVID-19 pandemic, the EU and its allies such as the United States should take heed and deal with the Cambodia issue more strategically.

How to deal with the Cambodia dilemma
Instead of implementing tough measures that affect ordinary Cambodians more than the political elites responsible for Cambodia’s democratic backsliding and human rights abuses, the EU should reconsider its approach to engaging Cambodia.

The way forward for the EU and the US may be through increased engagement in the form of aid, grants, investment, and government-to-government as well as people-to-people exchanges. While China increases its activities in all these dimensions, it is not wise for the US and the EU to do the opposite.

Thus, while still being mindful of Cambodia’s political developments, the EU and the US need to strategically engage Cambodia in ways that create a conducive environment for Cambodia’s young and fragile democracy to grow. The US and its allies have done so for almost three decades, and although the success seems to be limited, they need to continue and increase their Cambodia engagement. The decline or absence of such engagement is likely to allow Cambodia to be entirely dominated by China, the geopolitical consequence of which are yet to be seen.

The EU seemed to implement softer measures towards Cambodia amid the pandemic, with  $483 million in grants and loans to support the fight against COVID-19 and help Cambodia’s recovery plan. This indicates that the EU may not be engaging in double standards but being rational when engaging Cambodia. Put another way, the EU punishes Cambodia for its gradual descent into a one-party state as well as “serious and systematic concerns related to human rights” but supports Cambodia in times of need, irrespective of Cambodia’s perceived democratic setbacks.

Some argue the EU’s trade sanctions may be too little, too late to produce the desired outcomes, and given the adverse consequences of COVID-19 on Cambodia’s economy, it is unclear and hard to assess the effect of the bloc’s EBA tactic on Cambodia.

However, what is clear now is that the efforts by the EU, the US and China’s other competitors to balance Beijing’s growing influence in Phnom Penh will continue. This will likely lead Cambodia into a challenging strategic environment where it might fall victim to the US-China competition for influence in the Asia-Pacific region if it cannot mitigate risks and prevent crises effectively.

Cambodia still needs the EU and the US, so it must reconsider foreign policies that seem to lean towards China. It must refrain from actions that are seen as serving China’s core strategic interests, either domestically or internationally. Tilting towards China—an ally that turns a blind eye towards human rights issues—at the expense of relations with other partners including those in the region will only serve the interests of the ruling party, elite groups and Hun Sen himself, not those of the majority of Cambodians. 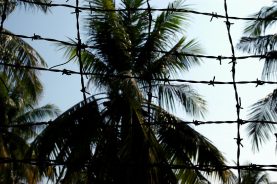 Cambodia should start to address its tarnished international image and improve the capacity of its diplomats who, when better trained, may help to retain the sympathy of the EU and the US—something a small and poor country like Cambodia needs in order to support its economic and democratic development as well as to realise its long-term development vision. Cambodia should also support a rules-based international order and proactively engage in multilateral mechanisms as it seeks to further integrate itself into the region and the world.

Most importantly, greater and genuine efforts should be made to ensure the country is not edging towards authoritarianism. The government needs to provide more space for its citizens to express their concerns instead of intimidating and silencing them through legal means. It must constructively engage all key stakeholders, particularly democracy advocates, human rights activists, civil society groups and youth who play a crucial role in contributing to the development of democracy in Cambodia.

It is not the sole responsibility of the EU and the US to address their Cambodia dilemma. Cambodia, too, has a vital role to play in solving this puzzle.