Anwar Ibrahim outside the prime ministerial offices in Putrajaya (photo: @anwaribrahim on Twitter)

The return of Anwar

Editor’s note: this article originally appeared at Asialink Insights and is republished with permission.

It was a Malaysian election like no other. After voters elected the first hung parliament in Malaysia’s history on 19 November, it took almost a week of tense negotiations to form a coalition government able to command a ruling bloc of 112 seats in the new 222-seat Dewan Raykat.

Anwar Ibrahim, the perennial aspirant to the prime minister’s office, finally obtained the prize he had long sought. Having consulted with his brother sultans in the Council of Rulers on Thursday morning, the Agong or King, Sultan Abdullah of Pahang, announced that Anwar would become prime minster. Anwar was formally installed by sunset.

The challenges facing Anwar and his government are immense. Not least of those challenges is how he and it manage the deals underpinning the new PM’s ascendency and the legacy for Malaysian politics left by a unique election outcome.

The election has changed the Malaysian political landscape in various ways. Until the 14th general election (GE14) in 2018, the question of who would govern could always be answered in advance; only the precise numbers had to be filled in on voting day. The Malay-based Barisan Nasional (BN) coalition, led by the United Malays National Organisation (UMNO), would command much of the middle ground and win; opposition would be divided between the poles of the largely Malay-based, Parti Islam Se-Malaysia (PAS), and the largely non-Malay-supported social democratic Democratic Action Party (DAP).

In 2018, there was some change. A bare majority was won, and held good in government for two years, by a combination of the DAP and two parties that had broken out from UMNO, Anwar’s People’s Justice Party (PKR) and Dr Mahathir Mohamad’s Bersatu (the Malaysian United Indigenous Party, better rendered as the “Blood-and-Soil Malay Nationalists”).

In 2022, GE15 yielded something entirely different: a three-way split, offering no clear or even prospective parliamentary majority. A division in which the long dominant player, UMNO–BN, became the smallest, the weakest, and the most internally divided.

The smaller players aside, the numbers in parliament split three ways: between the UMNO–BN; the Pakatan Harapan (PH) coalition of PKR and the DAP; and the new Perikatan Nasional (PN) coalition of PAS and Bersatu. 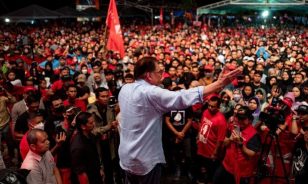 The UMNO era is over, but its political economy model and the social conflicts it created still set the terms of the new politics.

Notably, since GE14, Bersatu has changed both its leader and its political affiliation. Bersatu had been formed before the 2018 elections as Dr Mahathir’s instrument to help bring down his old party, UMNO, in concert with PH, which combined Anwar’s largely Malay-based, but multiculturalist, PKR and the doctrinally multiculturalist and secularist DAP.

But this PH–Bersatu government, in which the then 92-year-old Dr Mahathir reprised his role as prime minister, was brought down in 2020 by defections from both PKR and Bersatu. These defections were led by Bersatu’s Muhyiddin Yassin, who became its leader and PM following royal intervention. Muhyiddin, who survived as PM for just 18 months, then led Bersatu into partnership for GE15 in 2022 with PAS in the Bersatu-fronted, but PAS-driven, PN coalition.

By last Thursday, none of the three main coalitions had found the numbers to govern, either by recruiting local parties from Sarawak and Sabah or support from each other. PN refused to work with PH because of its distrust of both Anwar and the so-called Chinese ambitions of the DAP, while a much reduced and very divided UMNO struggled with the idea of working with either PN or PH.

Enter the Agong. When it appeared that no coalition was about to muster a governing bloc, the Agong stepped up pressure for a unity government. With Muhyiddin firmly rejecting a proposal for his PAS-backed PN coalition to work with PH, in a way that struck many as rude to the Agong, quiet and detailed negotiations between Anwar’s PH and key figures in the once-dominant but now humiliated UMNO–BN team were paying off.

Another factor then came into play. The election results were a huge advance for the Islamists of PAS. They knew it, and they showed that they knew it. Enthusiastically. But to quite widespread disquiet, and not only at the public level. There has always been a deep underlying tension between the Malay royal families and the Islamist political forces. Constitutionally and by revered tradition, the Malay sultans or rulers are the heads of Islam in their states. And they like it that way. They are disinclined to share their prerogatives of religious leadership with those who may answer to other forces. They also are wary of the possible direction of Islamist zeal against their own position, privileges, and opulent lifestyle. Royal seigneurial Islam and clerically driven popular insurgent Islam have never lived easily together in the Malay world.

When the Agong saw the possibility of an entente between Anwar’s PH and the chastened UMNO–BN group, from whose front line some failed leaders and those in legal jeopardy were ready to stand aside, he secured the assent of the other sultans in the Council of Rulers. Taken aback by the extent of the collapse of UMNO with whom they have always worked and identified closely, the sultans seem to have recognised that they should not let any dislike of Anwar and their disinclination to have anything to do with him outweigh their quite immediate and genuine fears that they would be politically bereft without UMNO at their side. When Muhyiddin sunk the Agong’s first “unity government” plan, they had to look elsewhere. And once Anwar and the less controversial office holders in UMNO struck a deal, the royals soon endorsed it. Anwar Ibrahim is sworn in as prime minister at the Istana Negara on 24 November 2022. (Photo: @istana_negara on Instagram)

But the ramifications of the election result are likely to endure and present a challenge to Anwar’s premiership. The election vote was more than a resounding repudiation of the ineptitude of the UMNO–BN government that in 2021 replaced the Muhyiddin administration. It was more than merely a rejection of UMNO corruption, highlighted by high-profile court cases centred on leading UMNO ministers and personalities associated with former PM Najib Razak. It also was more than a harsh verdict on the unrelenting selfishness of all the main Malay politicians—those veterans of UMNO who had struggled incessantly over many years for position and advantage, while being seemingly deaf to popular concerns, before, after and during the COVID pandemic.

This Malay political war of all against all signified, and was the consequence of, something deeper. It reflected the fact that the rise of the new doctrine of Malay ascendancy—of “Ketuanan Melayu”—has over the past two decades sidelined, and intimidated into silence, other forms of political thinking and action. After successfully excluding non-Malays from political power, the Malay ethno-supremacists had nobody left to fight with except themselves. Always the core of national politics, Malay politics declined into incoherence, “warlordism” and factional retribution.

This was not something that many voters were prepared to accept, especially Malay voters who were, ironically, the target audience. But how would they express their rejection, politically? That is what GE15 put to the test.

And the answers it provides are as remarkable as they are, to many, unexpected.

Since the election, supporters of the Islamist PAS have been emboldened in the pursuit of a long-nurtured view of Malaysia’s future as, eventually, an Islamic state operating upon the basis of and implementing Shari’ah law—or a certain clericalist understanding of its character and imperatives. PAS never succeeded in selling its pitch to the Malay majority. But in PN, PAS teamed up with Bersatu to sell its wares. PN offered, and was a vehicle to promote, an ultimately PAS-congenial objective and PAS-directed outcome—but without PAS itself having to sell the product, with its own controversial baggage. Many did not see this coming. Even those who foresaw it misjudged and underestimated the strength of the PAS-driven PN surge. Many cosmopolitan voters in the modern non-Malay areas were disquieted by the tone and style of the PN campaign, especially after its election-eve indulgence in anti-Christian rhetoric, when Muhyiddin declared that Christians were being used by Jews to divert the nation from its purposes.

But for many in the semi-urban and rural Malay heartlands, this was no problem. They wanted to repudiate UMNO, to teach it a lesson. And they wanted a believable protector of Malay interests—what UMNO always insisted it was. In doing so, they have placed PAS and the Islamist project generally in the strongest position they have ever held in post-independence Malaysia. PAS has now strengthened its influence on the political and national life of Malaysia—or at least key parts of it.

This is the Malaysia Anwar will have to govern. He will be on a short leash within his own coalition and obliged to overcome Muslim suspicions he is anti-Islam and pro-Chinese. But Anwar who, surprisingly, has now rescued his old adversary UMNO from what last week seemed like imminent collapse and disintegration has, for now, restored a measure of economically indispensable hope and optimism to Malaysian public life. And potentially, some stability too.