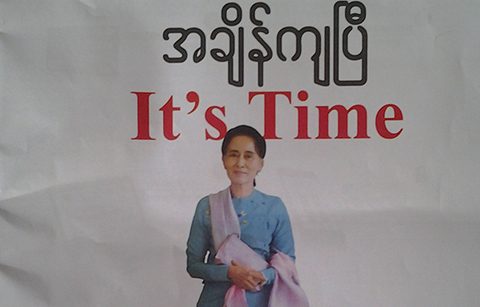 The tour group and the vote The cover of The Irrawaddy newspaper. Photo: Sally Bamford

Tourists have been voting with their feet and travelling to Myanmar in increasing numbers since the military regime first introduced 30-day visas in 1994.

Then, as now, we came to see sights all the more enticing for having been shrouded in mystery for so long, and before the country’s unique culture was irrevocably changed by contact with the West.

Burma’s status quo, however uncomfortable for its people, made it a drawcard for independent travellers in the 1990s. We could laugh at SLORC (the official name of the ruling military regime), make callow and stupid jokes about spies, and know we were going home to a functioning sewage system and a lack of lack.

But travel then was challenging — one did not simply ‘do’ Burma. You were forced to immerse yourself – just like the locals – in its daily and often uncomfortable vicissitudes for the simplest of tasks. Perhaps that’s why many of us fell in love with the country and the resilience of its people and have been returning regularly ever since.

In the last three years I’ve participated in the rapid rise of the package tour, and plead guilty up front to being one of those umbrella-wielding guides ushering clients from site to site — with great enthusiasm, I might add!

Despite my clients being ‘senior’, well-educated and articulate, they often have trouble defining what it is about Myanmar that makes them want to travel there. Their motives now are not so different to mine 20 years ago — a desire to “see the country before it changes”.

My latest tour group arrived in Yangon on 7 November, to a hotel heaving with international journalists. All the group members knew of Daw Aung San Suu Kyi’s decades’ long fight with the military regime and the constitutional prohibition against her becoming President, and excitement at being in Myanmar at such a historic time ran high.

A school around the corner from our hotel was a polling station and several of us ran up to take photos before the election day’s sightseeing of more mundane locations began. Our local guide, Min Min, an NLD member, was constantly on his phone, and “What’s the score, Min Min?” became the hourly catchcry as votes were counted and seats fell to the NLD during our first full day in Yangon.

The National Museum was closed, as were the majority of the shops in Bogyoke Market – no matter, we did a photo stop outside Daw Aung San Suu Kyi’s house, fighting for space with other tour groups.

The extraordinary quietness of downtown Yangon that day was eerie, as was the remarkable dearth of locals and foreigners at the famous Shwedagon Pagoda that night, but not unnaturally this went unremarked by my group at the time. The following day was more business as usual, and the group cheerfully dodged traffic and sidewalk vendors during a walking tour hosted by the Yangon Heritage Trust.

Lots of good-natured comments were made about the bags under Min Min’s eyes: “He’s been up all night celebrating” and “Good on him”.

Clearly The Irrawaddy’s “It’s Time” banner and front page had struck an especially deep chord with my Australian clients. One group member, a prominent former journalist and editor, asked questions about media censorship and happily took photos of newsstands displaying the day’s papers.

In the month before the tour commenced I had fielded queries about safety and insurance, and had wondered how much tourism would be affected by the election. As it turned out, I have never seen so many tour groups this early in the season. Both tragically and ironically, Myanmar that week turned out to be safer than Europe.

The day before my tour group arrived, I had indulged in a pedicure at a tiny salon in Bogyoke Market. “Are you excited about voting?” I asked the young woman who was delicately painting my toenails.

She would have been a young woman during 2007’s violent ‘Saffron Revolution’, and grew to maturity and her first job under a regime that refused to honour the results of the 1990 election.

Whatever happens in the near and distant future, my tour group and I are unanimous in the hope that “It’s Time” in Myanmar turns out to be a time for peace across the entire country.

Sally Bamford is an ANU PhD candidate researching the development of Myanmar’s Nat imagery. She supplements her scholarship by leading tours in Myanmar on behalf of Odyssey Travel, part of the Australian & New Zealand College for Seniors.