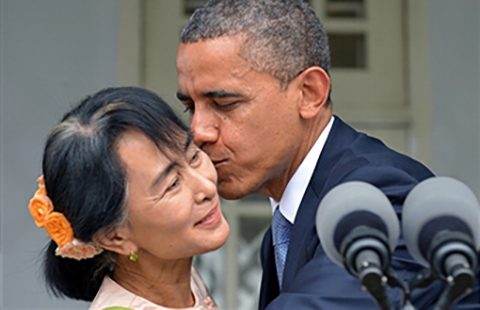 The United States and the vote

Washington’s interest will wane in the wake of Sunday’s vote. But the country still bears watching.

Myanmar will hold general elections on Sunday 8 November, the first nation-wide occurrence since the country formally transitioned to parliamentary government in 2011.

Since Myanmar’s transition from overt military rule, Washington has cajoled and encouraged the erstwhile junta leaders on their “roadmap to discipline-flourishing democracy.”

The initial optimism has waned, however, and following elections, high-level attention on Myanmar will only dissipate, as Washington doubles down on its conventional allies and partners. The timing is somewhat unfortunate, because the post-election period will be an important phase of democratic consolidation, as various leaders vie for top positions.

Washington is focused on short-term gains, most immediately the holding of credible elections, a notable benchmark for the country following decades of military misrule. But, for all the excitement surround election day, the real tests for Myanmar’s democracy will come in the interregnum period: from 9 November until the Pyidaungsu Hluttaw (Union Parliament) convenes on 31 January, 2016. This is when the real horse-trading will take place.

In late January, Myanmar MPs will convene to pick presidential and vice presidential candidates, as well as the powerful Speaker of the Lower House, a position which some analysts predict Aung San Suu Kyi may take, given that she is barred from the presidency. Given the import of the ensuing months, it would be wise for Washington policymakers to keep open lines of communication with Naypyitaw in order to sustain some policy leverage.

Following elections, interest in Myanmar will likely fade from its current high, irrespective of elections results, in months and years to come. This should not be surprising. Myanmar will take years of economic reform before presenting valuable market access to American businesses; there will be a long period of transition before there is a viable military-to-military component in the bilateral relationship; and the US has other democratic partners in the region capable of effecting its strategic interests.

US perception of Myanmar’s elections
Still, United States government has made clear it places a lot of weight on the process and outcome of Myanmar’s election. Assistant Secretary of State Daniel Russell, in his testimony in October before the House Foreign Affairs Committee, stated:

If the conduct of these elections does not meet the expectations of the people of Burma or the international community, it will undermine Burma’s democratic reform effort, set back Burma’s growing international role, and make it more difficult for the United States to continue the positive trajectory of our relationship with Burma. The conduct and results of these elections will fundamentally shape our engagement with the Burmese government in 2016 and beyond.

Asked at a press conference in Yangon in May about how the US will determine whether Myanmar’s elections are free and fair, Deputy Secretary of State Antony Blinken said, “That is really up to the people of Myanmar. They will have to decide whether the election…outcome reflects their will. That is the test for the election.”

Most analysts are placing their bets on the two largest parties, the incumbent Union Solidarity and Development Party (USDP), comprised of former junta leaders and retired military officers, and the opposition National League for Democracy (NLD), which swept the 1990 elections but was barred from assuming political power. The NLD won 43 of 44 contested seats in 2012 by-elections, but the USDP maintains powerful patronage networks across the country and may retain a significant number of seats in the 2016 Parliament.

There are several possible post-election scenarios for US-Myanmar relations following the announcement of election results.

One; the USDP is able to muster enough votes, along with the military quarter, to maintain effective domination over parliament and place their presidential pick in power. US relations will slightly deteriorate as Washington shifts it support further in favor of the opposition camp.

Two, the NLD manages to carry the day, in which case Washington will likely seek to maintain close relations with the government, based on its years of support for democracy during the years of repression. In this case, the US could lose influence with the military and entrenched business actors tied to the military. In this case, Washington could be perceived as a fickle partner and selective favor may actually force a rift in Myanmar politics.

Three, neither party wins an outright majority and the USDP and NLD seek to build coalitions with ethnic parties, drawing on US electoral and democracy experts for their support of Myanmar’s parliament.

The US will continue to promote human rights and democracy in Myanmar regardless of the outcome, but its level of engagement will depend on the outcome of elections in both countries. The next administration in Washington may take less interest in Asia policy as international crises demand attention elsewhere.

The China factor
As political and economic heft continue to shift to the Asia-Pacific, Washington should seek to maintain close relations with Naypyitaw. Myanmar is at the crossroads of India and China, a strategic nexus of trade, infrastructure, and cultural exchange. The rise of China, rapidly growing economies in Southeast Asia, and the population explosion expected in India will continue to draw US attention to the Indo-Pacific.

The US should aim to bolster reliable, democratic partners in the region, for the sake of economic prosperity, security, and the continued flourishing of liberal norms. Myanmar could become a critical piece of Washington’s Asia puzzle, and it is therefore important to keep that card in the deck of all possible outcomes.

That means working with whichever political party wins elections on Sunday. The US should continue to promote civil society initiatives, voter education, and political party capacity building across the board in order to ensure credibility as a democracy proponent, rather than just the advocate of one party.

Of course, it is up to Myanmar’s electorate to choose their leaders. This year’s election marks a critical point in the country’s political transition. If peaceful and credible, it could cement nascent governance institutions and instill positive democratic norms for generations to come.

If the powers that be thwart the peaceful transition of power, or if the military chooses to intervene in the case of instability, the precedent could be severely damaging for Myanmar’s democratic future.

Hunter Marston is an independent, Washington, DC.-based Asia analyst. He has worked in Thailand, Vietnam, and Myanmar, and holds a MA in Southeast Asia Studies from the University of Washington.