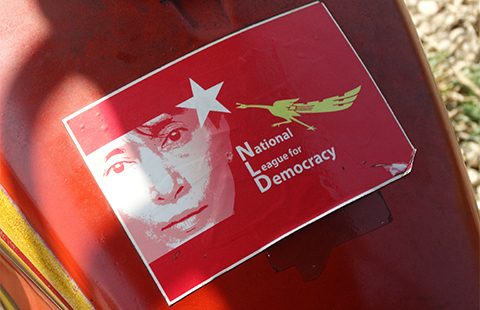 The world and the vote

In the lead up to elections, Myanmar’s openness to the outside world and international involvement has never been so high.

International involvement in Myanmar’s 2015 elections may be higher than it has ever been in the past, and indeed higher than at any time since Myanmar’s independence in 1948.

This involvement takes a variety of forms, from provision of strictly technical electoral assistance to overt political capacity building before the elections, to provision of quite extensive election monitoring (both privately funded and officially funded), and to facilitating international media interest in the elections.

Embassies and the offices of various international NGOs specialising in electoral support have been closely observing election preparations for many months. International media around the world is more interested in this election than at any time in the past, helped by the ease with which journalists can travel to Myanmar and interview people inside the country.

However, many international governments and organisations are not at all politically neutral towards the election. For example, the US and UK governments are under strong pressure at home, especially in their parliaments, from interest groups supporting the democracy movement and are therefore openly backing Aung San Suu Kyi’s National League for Democracy.

Myanmar’s fellow ASEAN members are primarily cautious and less judgmental about the election for a number of reasons, including that some ASEAN members are not known for holding “free and fair” elections. Other countries, such as Australia and the EU, try to avoid openly taking sides, although their sympathies are fairly well known.

Major Asian countries such as China, India and Japan – with substantial real interests possibly affected by the election outcome – are essentially pragmatic about the elections and are most interested in a smooth transition to an effective successor government; while they might be comfortable with a continuation of the present pro-military government, they cannot rule out a change.

That foreign governments are not entirely neutral is not necessarily a bad thing; it just means that objectivity cannot be expected from such sources.

International rights groups are essentially in fairly predictable situation: they naturally want to focus attention on flaws in the election arrangements and preparations, in abuses of power or authority or rights that might occur in the course of the election campaign, and in any developments that might materially affect final judgements about whether or not the election has been conducted freely and fairly.

This is largely as it should be; but it does mean that rights groups inevitably direct most of their attention to problems and issues, and sometimes it means they are inclined to exaggerate the overall importance or significance of specific problems. For instance, mistakes in voter registration lists can occur in elections in any country, although it seems that those occurring in Myanmar this time have been excessive.

International pro-democracy groups have in the past not been disposed to give Myanmar governments the benefit of the doubt, and some are endeavouring to publicise many long-standing problems as much as possible, presumably feeling that 2015 might represent a golden opportunity to capitalise on their accumulated Myanmar expertise and resources.

Of course, the extent to which problems arise inevitably affects attitudes to the elections, both the attitudes of voters who are apparently apathetic and less hopeful than might have been expected, and the international attitudes, where the elections might well be seen as lacking credibility. Aung San Suu Kyi and her National League for Democracy remain the darlings of the West. Photo: Adam Jones on flickr https://www.flickr.com/photos/adam_jones/

What has really changed with this election is the attitude of the Myanmar Government’s Union Election Commission (UEC), which has from the outset been open and receptive to outside ideas, and especially international ideas, about how to best manage the election. It allowed two of the leading election support organisations in the world, International Democracy and Electoral Assistance (IDEA), and the International Foundation for Electoral Support (IFES) as well as the US-based Carter Centre to set up in Myanmar and to carry out capacity building programs since 2012.

Election-strengthening programs were carried out not only with the UEC itself, but with Myanmar political parties and with local NGOs. Serious efforts were made to bring about behavioural change, with codes of conduct developed for political parties, for domestic and international election observers, and for local media (by then, free of print censorship).

It is hard to identify anything else that could have been done by the UEC, or to what extent it might have even gone further than the Myanmar Government or the Myanmar Army might have wanted. UEC Chair Tin Aye (a retired Lt General) certainly seemed to take the lead on all matters affecting the elections.

While this has meant that the elections are perhaps the best run elections in Myanmar’s modern history, there have been no suggestions to date that international election bodies might have held back on their criticisms of the elections for fear of alienating the UEC, whose cooperation they depended on.

So far, for example, the UEC has signed formal memoranda of understanding for election monitoring with the European Union and with the Carter Foundation of the United States, as well as with the Bangkok-based ASEAN Network for Free Elections (ANFREL). The UEC is expected to sign a similar MoU with the Netherland’s Gender Concerns International. This is far cry from even the 2010 Myanmar elections, when election observers were limited in what they could do and where they could go.

In the end, many countries – including Australia – will send election monitoring teams, reflecting their interest both in being able to judge for themselves how to rate the election process, as well as their interest in being appropriately positioned to manage post-election relations with the successful party in the elections.

Most foreign governments would prefer to be able to rely on their own election monitoring experts, whether private or official, rather than depending on others, but not all countries will attach the same importance to election monitoring results. Countries are likely to be more or less forgiving of Myanmar’s election process, depending partly on any pre-conceived views they held.

Finally, the international media is also showing great interest in the elections, although not necessarily any more than Myanmar’s newly “liberated” domestic media, which is reporting extensively, intelligently, and at times quite critically on the election process.

International media is to some extent following leads carried by Myanmar’s domestic media, but is distinguished by being much more overtly interested in the prospects of the National League for Democracy, and more focused on the question of the Rohingya, which will really be a post-election issue.

Ultimately, the Myanmar election process will not be perfect, and final judgments about the merit – and therefore the credibility – of the election will eventually be influenced by the performance of the government that takes over.

In the end, judgments by Myanmar people themselves will be more important than international views, although international attitudes will determine things like the levels and nature of external assistance.

Trevor Wilson is a former Australian ambassador to Myanmar and a visiting fellow in the Coral Bell School of Asia Pacific Affairs at the Australian National University.