Khemthong Tonsakulrungruang’s analysis in “Purging the Thai Sangha”, interesting as it is, misses an important point in the “purging” of senior Bangkok monks. The simplification in this piece gives an air of moral legitimacy to the heavy-handed actions against high-ranking monks that is not deserved. Here is another viewpoint for readers.

What we are seeing is the politico-religious elimination of the Mahanikai (Maha-nikaya) sect as an influential, popular power in high-level administration and on the Supreme Sangha Council. The matter is in no way a cleaning out or purge of the Thai sangha per se. The reasons are more politically conniving and to do with money than simply an attempt at “purification” of the sangha—which is perhaps what the ruling palace regime (distinct from Prayut/Prawit’s faction) would like us to think.

More than seven monks have now been demoted and a number who were on the Sangha Supreme Council removed. These monks were mostly from rich Greater Bangkok temples. More connections are being made as we speak and they may extend to a wider targeting of these Phra Racha Khana Mahanikai monks.

What will be the consequences of the crackdown? The reinforcement of traditional central, royalist political control over the sangha. There is also a great deal of money involved in these prominent Mahanikai monasteries (especially religious “tourist” places such as Wat Saket) and the need to capture or control the flow of wealth by higher interests is important. My earlier piece on Wat Dhammakaya stressed a not dissimilar point.

All the accused monks claim innocence to the charges outlined in Khemthong’s article, which follows recent information dispersed in Thai media. Guilt of course needs to be proven. But these accusations alone are enough to discredit and force monks with 40–50 years seniority to disrobe, losing their monastic status.

According to the 1992 amended version of the 1962 Sangha Act, the king has the power to promote, appoint and demote monks. The 2017 junta’s fiddling with the Act ostensibly concerned issues of assets acquired by monks during their time serving in the monkhood. But more importantly, it reinforced the power of the king to appoint the Supreme Patriarch, countersigned by the prime minister. This facilitates denying qualified Mahanikai monks the position of Supreme Patriarch. It now, once again, allows the old power to choose someone from the royalist-founded Dhammayut sect, regardless of traditional monastic seniority. It must be remembered that the Thai sangha has immense influence in a predominantly Theravada Buddhist society.

At least two Mahanikai monks would have been legitimate applicants for the position of Supreme Patriarch: Somdet Kiew (who passed away in 2013) and Somdet Chuang. In the latter case, negative propaganda was consistently disseminated in the media to discredit him. The current reformist Dhammayut Supreme Patriarch, Somdet Amborn (Thailand’s 20th supreme patriarch), was directed to take back the ranks of the seven prominent Mahanikai monks. While he says that he wants little to do with administration in the Supreme Sangha Council, he clearly has no choice.

What has all this got to do with Suwit Thongprasert (Buddha Issara), of reputedly dubious background from the slums of Bangkok? Readers of the Guardian Weekly would have noted a 2015 article describing Buddha Issara as a great national “reformer” of the sangha. How far from the truth! But they, like other western media in the past decade or more, relied on skewed news sources inside Thailand.

It appears that Suwit may have been emplaced in the sangha by the palace network some time back. The network has agent provocateurs in all social domains who, like players on a chess board, are positioned to create a political space when called upon to sustain their interests. This is an important point. Right now, elements of the regime would benefit from outright street confrontation to draw into the open “red” and perceived “anti-monarchy” dissidents, to maintain the status quo (-ante) and to void or skew the near prospect of elections.

Buddha Issara continued to have support from the old-money royalist establishment. How was he arrested without his four around-the-clock Royal Marine Seal bodyguards present? Two theories concerning his arrest are prevalent both with different implications:

Buddha Issara has become a danger to the rulers by knowing too much, and his inside information and game play may surface one day.

Thailand is a county under a capricious and pervasive patronage system where democracy, as we understand it, implying some degree of rule by the people, has never existed. Perhaps we need to revisit the fate, for instance, of Banharn, Chatchai and more recently Thaksin (and Samak, Somchai and Yingluck).

Now, we need to ask: who showed them the exit or stymied their success after winning mandates and/or implementing successful social and economic policies? All the while the Democrat Party, established early on as a political entity to serve the monarchy, is sitting in the wings and ready to take control which it usually does after coups (which is why there are now rumblings from the “yellow shirts” about Prayut’s “overstay”). Note also who sided with Buddha Issara during the street protests. There is still much to play out in the current religio-political conundrum in Thailand. This requires a careful and prudent reading. 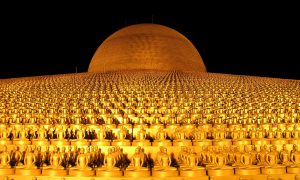 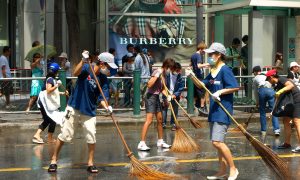 A Meeting of Masks: Status, Power and Hierarchy in Bangkok 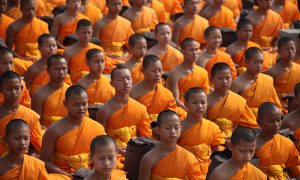 Can a new Sangha Raja heal the country’s Buddhist order and politics?