My concern with this book lies as much in what is unsaid—what is seemingly eradicated and not present in consideration—as what is said. In the opening pages, the writer outlines a scenario in contemporary Thailand that can only be called a flattening of emergent democracy. Centred on the stage are the obscurantist (mostly) urban-dwelling “yellow shirts” and class antagonisms. But the far-reaching problems reverberating across Thai society today—who cannot see these?—are more multifaceted than the reframing of traditional notions of kalathesa (กาลเทศะ, “propriety or appropriateness” [pg 53, 64–65]), somtam and late-modern shopping. Interesting, if not original, the discussion looks at changes in urbanity, culture and the economy and their nexus in Thailand’s post-2006 political world.

New ways of thinking are needed among Thai scholars to read judiciously the past fifteen years, rather than reiterations of a simplistic binary analysis embedded in town/urban (middle class/affluence/yellow) vis-à-vis country/rural (working poor/red).  To understand the present moment, we need to reclaim, de-mythologise and re-present tradition and history more a 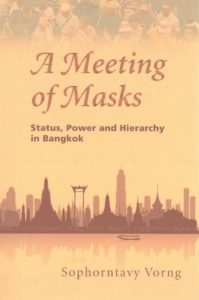 s a medley of voices. This allows for the possibility of various readings and experiences. Instead, missing an exciting opportunity, the book presents a singularity of social, cultural and political events as selected and assumed facts.

A more critical analysis of contemporary society may have unpacked the taken-for-granted statements which are replete in the book. An example is the military’s “referendum” (pg 5), which was indeed passed by a “majority” as the writer says. However, not discussed are the questions that were raised at the time in regard to the lack of transparency, dubious vote counting and outright coercion. In fact, only an estimated third of eligible voters cast ballots in favour of the military’s draft constitution (given also promises from the junta that the constitution is an intermediary means to allow for democratic elections, which still have not come).

The main factor that led to the destruction of a nascent democracy some fifteen years ago was a tactic to divide society through persistent ultra-nationalist propaganda, which was undertaken throughout much of the ninth reign. This was evident in iterations of Thaksin Shinawatra-associated (“new money”) governments, which came to be seen as a threat to the vested power and interests of the centre-nation establishment (amatayatippatai or amaat, อำมาตย์, the “elite establishment”, especially equated with so-called “old money” [pg 100]). Complicit in the destruction of Thaksin (and indeed later his whole family) were the elite-controlled and bought media, judiciary, reactionary civil society and branches of executive government (kharaatchakaan, literally “servant of the king’s affairs”). Meanwhile everyday life for the middle class was much the same, except for less buying, more borrowing, and vacuous strolling of the malls.

It was a multi-fronted assault on democracy, reverberations which are now seen in the form of the current dictatorship. The military elite were empowered to bring the situation and history back to a point where the establishment was most comfortable: centralisation, to recapture history, its mythologies and the centre-summit authority of the nation-state. At this point of late modern society and lived history, a more critical analysis of recent Thai politics is needed.

The book contains a lot of “much the same” commentary on Thaksin, but no word about the way in which the establishment judiciary dismissed serious cases against ex-PM Abhisit Vejjajiva (as in his use of live ammunition against unarmed red shirt protestors in May 2010, which led to hundreds of deaths and disappearances). Also overlooked is Abhisit’s political partner Suthep Thaugsuban’s alleged involvement in the repression at the time and later his leadership in a violent street movement against democracy. To be fair, these facts, however unsavoury to some writers, need to be put into critical historical context. The inclusion of better understandings of the red shirt movement, its motives and ideology from one or two other scholars (Buchanan, Glassman, Ungpakorn, the current reviewer) would have elevated the discussion in connection to contested social and political space.

A class-based analysis of contemporary social, cultural and political antagonisms oversimplifies. The question remains: what is the link between bourgeois aspirations in the Thai metropolis and the current political conundrum and entrenched social divisions? The middle class in Bangkok was clearly fearful of losing its status and comforts, and was insecure about the narrowing of the spatial divide under Thaksin’s decentralisation and pro-poor policies. But there are more than urban (middle-class) and rural (working/peasant) antagonisms in the entrenched inequalities and traditional status hierarchies. These are present to be sure, but they do not explain why class delineation was not always so clear-cut among social movements. The problem to the establishment was that a majority in the Thai electorate had voted for a government of their choice—three times, and each time brought down. This majority could see their loss of rights, double standards and how the use of brutal force by the military had crushed their aspirations.

A discussion of social space without mentioning Lefebvre (or even later critical social geographers) is disappointing. Likewise, there are no references to M. de Certeau in parts on the strategies and tactics of everyday life in the metropolis. In the discussions of shopping, Benjamin’s arcades and the bourgeois dreams and illusions of the novelty in merchandise and fashion are absent (Benjamin’s flânerie could be nicely equated with notions of doen len, เดินเล่น, literally “walking for amusement” [pg 90]). In fact, the book has many interesting similarities to this reviewer’s 2008 published book, Buddhism and Postmodern Imaginings in Thailand: The Religiosity of Urban Space, which was not cited.

Similarly, the discussion on a crucial turning point which henceforth sanctioned the use of explicit violence against the pro-democracy protestors in May 2010 (the discussion on “Central World burning” [pg 114-115]) would have benefited from this reviewer’s 2011 published research paper, Larger than Life: “Central World” and its Demise and Rebirth—Red Shirts and the Creation of an Urban Cultural Myth in Thailand. At the time, this was a critical historical event in bourgeois sentimentality, nostalgia and loss. It was not conclusive by any means, as the writer claims, that the well-orchestrated demolition of the shopping complex was instigated as a “working class (red) response to their disenfranchisement” (pg 172). Research has showed it was more likely to have been ignited through other complex establishment motives and through the use of trained military actors.

In the last chapter of the book, on the individuation of late modern urban society and the rupture of traditional (village) communal values, the work of Bauman and Beck for instance would have thematically illuminated the discussion. Still, there is a refreshing discussion about status appropriate behaviour reinforcing what we already understand by the notion of the individual, or being in-the-world, and the implications of neoliberalism and globalisation on the nation.

The book has some utility for early mainland-Southeast Asian studies students. Its accessible language and easy flow makes it highly readable.