Since the breakup of the colonial regime in Myanmar in 1948, one of the main Karen political organisations, the Karen National Union (KNU), and its armed wing the Karen National Liberation Army (KNLA), have pursued a strategy of armed conflict against the Myanmar state Tatmadaw in one of the world’s most enduring civil conflicts. Under brutal military and counterinsurgency campaigns, the civilian population of Karen state was exposed to decades of instability and egregious human rights violations, which naturally led to mass displacement and a constant flow of refugees to Thailand and further afield. It is in this context, that the Thailand–Myanmar border became a space of refuge for hundreds and thousands of people, materialised in a dense network of local and international humanitarian organisations and civil society groups covering many domains on both sides of the border. Anne Décobert’s book, The Politics of Aid to Burma: a Humanitarian Struggle on the Thai-Burmese Border (2016), provides a deep insight into one of the most formidable medical organisations of this network, the Back Pack Health Worker Team. 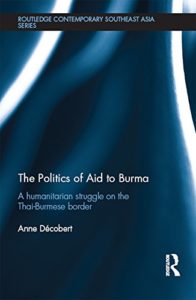 Myths, legends, and rumours about Mae Sot and the Back Pack team have long been a source of speculation and gossip. Portrayed as brave risk-takers—battling jungles, armed conflict and disease—they are well-known amongst the dense landscape of humanitarian workers on the Thailand–Myanmar border for having put their lives on the line to help distribute healthcare services to those most in need. What began as a “fairly ad hoc response” in 1998, Décobert describes how over time the Back Pack Health team developed into a formidable and institutionalised apparatus of providing healthcare in the borderlands, filling a crucial void in the lives of Karen people.

Based on discussions with Back Pack medics and armed non-state actors over two years, Décobert takes you deep into the self-described “humanitarian struggle” of the Back Pack Health Worker Team with this book. This includes detailed accounts of their growth as an organisation, their political-moral vision, the development of “local-global partnerships” and their negotiation of multiple authorities and armed groups. Another important feature of this movement, as Décobert describes it, is the far reaching transnational network of advocates, private donors, government aid agencies and foundations that supported the growth of Back Pack as an organisation and the multi-layered partnerships that have enabled their legitimacy and credibility to their cross-border program over time. Indeed, as Décobert notes, at the peak of their success the Back Pack team were seen as a model humanitarian aid partnership through which to deliver aid on the ground in conflict affected communities

Much of the success of the Back Pack team lies in the fact that its program relies on indigenous medics working within their own communities. Chapter 5 gives an insight into some of the experiences and perspectives of the community health workers themselves, and the difficulties of navigating a complex, and often dangerous, web of power relations. The impact of violence on everyday life is a central theme of this chapter, as is the deep sense of mistrust and fear of the central Burmese government. Décobert’s ethnographic vignettes artfully capture the devastating impact of decades of conflict and state induced violence on local populations, which for Back Pack members only “reinforced a worldview in which the state was the source of oppression and suffering” (pp. 249).

In Chapter 7 Décobert reflects on the future of the Back Pack team and other cross-border aid in relation to the evolving political context of Myanmar. She notes the hopes, fears, and deep sense of uncertainty for Back Pack’s members, and their concerns for the ongoing provision of healthcare to vulnerable communities. She also captures the deep sense of betrayal and disappointment as donors and INGO partners increasingly distanced themselves from partners like Back Pack, shifting their funds and allegiances towards Myanmar’s central government in Naypyidaw as the country began to open up. For people who spent their lives defined by responding to the violence and suffering inflicted on communities by the Burmese military, Décobert artfully captures one of the key problems of impartiality facing the peace process and humanitarianism more broadly.

Décobert’s book comes at a critical juncture in both the peace process and discussions of aid and humanitarianism in Myanmar. In a context where health services have long been tied to contested control over territory, many ethnic leaders see the development and social services initiatives of the Myanmar government in conflict affected areas of the country as a means to pacify contested areas of the country and expand their authority. Significant questions are being raised, then, about the impact of aid provision on the ground, and the role these actors play in extending the administrative and territorial reach of the Myanmar government and military. Not only does this serve to undermine the relationship between ethnic armed organisations and their support base, but it also undermines the special role that community-based organisation like Back Pack have played for so many years. 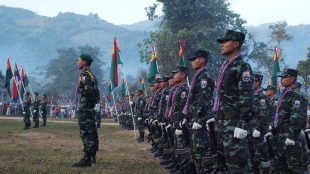 Although Décobert’s book was published in 2016, the main perspective of the research was prior to the 2010 elections and the subsequent initiation of the reform processes. Given the timing of the publication, it would have been good to see some engagement with the peace process negotiations and reflections on how communities see a way forward for the potential coming together of state and non-state service provision. Nevertheless, this ethnography will be a valuable and stimulating read for scholars in anthropology and development studies and especially relevant to humanitarian actors, donors and policymakers.

This book goes a long way in reminding donors and policy makers of the key role that ethnic community-based organisations have played in people’s lives and in the delivery of services such as health, education and governance. It also reminds us of the contested legitimacies of different stakeholders in conflict situations. Only by better understanding and engaging with local realities and actors can peace-builders, donors and aid agencies hope to support an inclusive, genuine and sustainable peace process. Justine Chambers is a PhD Candidate at the Department of Anthropology in the Australian National University’s School of Culture, History and Languages (CHL). As part of her research she conducted ethnographic fieldwork in Hpa-an, the capital of Karen state Myanmar in 2015–16. Her thesis focuses on understandings of morality and goodness in the post-conflict landscape of Karen state, getting to grip with how the significant social, political and economic changes of the last five years are impacting the lives of people both young and old. You can follow her on Twitter at @JChambers000.