Click the image in the middle of the article to access the full report on Why Does a Good Woman Lose?

At first glance, Indonesia’s 2019 legislative elections yielded at least one unequivocal good news story: the proportion of seats won by women in the national parliament (or DPR) had increased from 17.3% to 20.9%. While still below the aspirational target of 30%, the 2019 figure represents a high point so far in women’s parliamentary representation in Indonesia, and also brings Indonesia a step closer to the (strikingly low) global average of 24.3% for female parliamentary representation.

Still, Indonesian women remain under-represented in legislatures given the rate at which they stand for office. In 2019 a record 3,200 women stood as DPR candidates in a field of 7,985 candidates, meaning that 40% of the names on the ballot were women’s—exceeding the 30% quota enshrined in Indonesia’s electoral laws. But women’s enthusiasm for standing for office isn’t answered with enthusiasm for supporting them on the voters’ part: whereas 9.6% of male candidates won their seats, only 3.7% of female candidates did, according to calculations by researcher Ella S. Prihatini.

The results of research published in our new report, Why does a good woman lose?, shed light on why female candidates face an electoral disadvantage in the electoral arena compared to men. During the 2019 elections we and ANU colleagues collaborated with Gadjah Mada University to conduct qualitative research on female candidates’ campaigns in 13 locations across Indonesia. We also partnered with Lembaga Survei Indonesia (LSI) to conduct a nationally-representative survey of 2,200 voters, which measured the sorts of social attitudes we suspected might lie behind women candidates’ relative electoral disadvantage. While acknowledging the rise in the quantity of women being elected, some Indonesian activists have raised questions about the quality of many of the women candidates who were elected in 2019, and whether they are able to advance the interests of women by promoting female-friendly politics and budgetary allocations. Certainly, the qualitative element of our research found that Indonesia’s electoral system, combined with some features of political party culture, are shaping the type of female candidates being recruited by parties in some problematic ways.

In the open-list proportional representation system used in Indonesia since 2009, candidates compete first and foremost with colleagues from their same party to gain a high personal vote in their electoral district. In the race for the personal vote money politics has become commonplace, dramatically raising the costs of campaigning. Since parties expect candidates to raise their own campaign funds, the impact of this shift on women has been disproportionately large, because on the whole women in Indonesia have less access to financial resources than men. Some of Indonesia’s most accomplished female politicians—such as PDI-P’s Eva Kusuma Sundari and Golkar’s Nurul Arifin—have lost their DPR races in recent elections, blaming their inability to compete in the patronage stakes.

Another trend highlighted by our research is the rise of the dynastic female MP. When looking to fulfil their 30% quota and boost their vote tallies, parties see a potential female candidate’s link to a powerful male politician from her region as a vote-getter—as well as a guarantee of her access to ample campaign funds. The result, according to researchers from the University of Indonesia’s Centre for Political Studies (Puskapol), is that 41% of women who won DPR seats in 2019 had links to political dynasties, up from 36% in 2014. Though some women with dynastic connections are capable and talented politicians, many are there not as a result of their own attributes, but purely as a result of their family connections.

These institutional barriers, however, are only part of the problem. The national survey we conducted also revealed a stark reality: many Indonesians hold deeply patriarchal attitudes when it comes to women’s participation in politics.

For example, when asked whether ‘In general men are more capable of being political leaders’, 62% of respondents agreed, while only 19.3% disagreed. 88.2% of respondents, meanwhile, agreed that ‘Men not women must be the heads or leaders of the community, and women must support them’, while 17.6% disagreed. Interestingly, female respondents tended to have only slightly more favourable opinions towards women’s political leadership than men.

Men are judged to be more competent in most policy areas: it was only in three fields—women’s issues, financing and budgeting, and health—that more respondents said women were more capable than men. Large pluralities of Indonesians also agree with statements that attribute the relative lack of women politics to women’s own willingness and capability to participate in politics, such as that women don’t have the experience needed for politics (49.6% agree); that women are uninterested in political office (48.3% agree); that family responsibilities make it difficult for women to enter politics (47% agree); and even that women aren’t tough (kuat) enough for politics (40.7%). 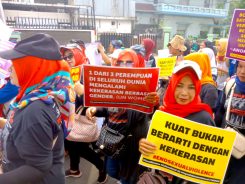 Clearly, Indonesia’s current 30% quota is not delivering the number of female legislators it is meant to—and, combined with the flaws of the open-list PR system, is not rewarding accomplished female lawmakers as much as it ought to be. What policy changes, then, should Indonesian lawmakers and advocates be considering as discussions about the next iteration of Indonesia’s electoral laws develop?

The most straightforward option is to return to the closed-list proportional representation system applied in 1999, and include a strong quota provision, such as one woman for every two candidates. The benefits of closed-list PR would go beyond opening up opportunities for greater opportunities for female representation, such as reducing money politics and clientelism, strengthening parties, and arresting the drift to personalistic politics.

If the DPR maintains the open-list system, it might consider a redesign of the quota to make sure that parties nominate women for winnable seats. Currently Indonesia has a placement mandate whereby one in every three candidates must be a woman; some activists have suggested that this placement mandate be strengthened so that a party have a woman listed first on its party list in at least one third of electorates. Though voters may still “vote around” women candidates—as many do now—placing more women in the top position would presumably be read by many voters as an endorsement of their quality by party elites.

Still, the patriarchal values and attitudes held widely across Indonesia will remain a barrier, no matter what institutional changes are introduced. It’s time for Indonesia to embark on a properly resourced large-scale campaign to change attitudes and convince voters that everyone benefits when more women are elected to representative bodies. And this needs to happen far in advance of the next election, if part of the aim is to convince good women candidates that they have a future in politics.