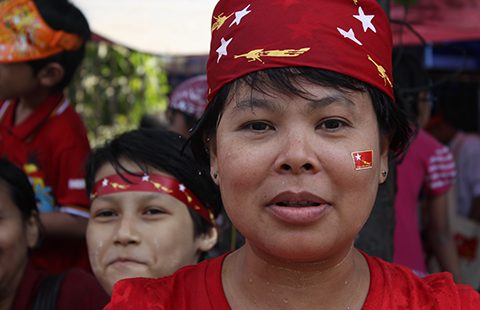 Women and the vote

Will Myanmar’s election narrow the gender gap in politics?

The yawning gender gap in Myanmar politics is a legacy of decades-long autocratic rule.

However, the country’s recently-opened democratic space gives hope that women will get greater access to political and professional opportunities.

Bridging the gender gap in Myanmar is even more critical for the advancement of a society where women make up 51.8 per cent of a country with 51 million people.

An equitable representation of women in politics is important as it can help develop broader and more inclusive social benefits. Research confirms the linkages between a higher number of women policy-makers and positive developments in several important areas in society, including education, health and social welfare.

But the question remains as to whether the space opened by Myanmar’s democratic transition is large enough for the nation’s women to grab their place in politics. One should also question women’s readiness and willingness to participate in Myanmar’s political landscape.

In the main, women candidates for the 8 November election are a clear minority.

Yet, these figures show some progress in women’s electoral participation compared to those of the 1990 election, where only 3.66 per cent of candidates were women, and only 3 per cent or 15 of 485 seats were won by them.

This progress, though modest, demonstrates women’s increased interest in participating in politics. It also reflects the existence of a legal and institutional structure that actively encourages and allows greater female participation. This ideal is also enshrined in the country’s 2008 constitution.

Despite the controversial document’s limitations in some areas, the constitution sets out some important goals for women, and political and public life.

Section 349 enshrines equal opportunity for women across a range of areas including, employment, trade, business, the arts, and science and technology. Section 369 (A) also provides equal rights for women to be elected to the country’s legislatures. Myanmar’s electoral laws also afford equal opportunities for men and women to both elect their lawmakers and be elected.

Implementation measures under the National Strategic Plan for the Advancement of Women (2013-2022), or NSPAW, also call for quota systems in legislative, judicial and executive bodies.

However, the absence of affirmative action on women’s political participation, particularly a lack of legal provision on targets or quota for women, has been oft-cited as demonstrating the crucial need for structural improvement.

Despite these efforts, parties still find it difficult to recruit enough women candidates.

Clearly, the mere existence of a permissive legal and institutional structure is inadequate to ensure greater participation of women in politics. These measures must be coupled with practical solutions, as the barriers to participation are more a matter of practicalities rather than legal or institutional.

There is no doubt about Myanmar women’s capacity for politics; their traditional involvement in the economy, even in times of restrictive authoritarian rule, proves they are capable of overcoming many hurdles and becoming successful entrepreneurs.

However, women’s real experience in and of politics is also somewhat limited. Practical measures under the NSPAW, such as the introduction of capacity-building and mentoring programs for women candidates and parliamentarians, could help overcome this hurdle. It is therefore imperative that these plans be put into practice sooner rather than later.

Women’s traditional role as ‘dutiful mothers’ and housewives is another major hurdle for them to overcome. These roles often prevent many capable women from participating in politics and public life.

In addition, today in Myanmar women also play the role of bread-winner, sharing the economic burden with their partners. This sets them further away from politics. Higher economic growth can enable women to be in a better position to take up the responsibilities of public office.

Creating an environment that enables women is not only a responsibility of the government; it also lies with Myanmar’s civil and economic society. Media also can play a great role in raising awareness about new opportunities for women in politics and promoting ways to fully utilise the untapped potential of women in Myanmar.

Without a doubt, there is a long way to go to narrow the gender gap in Myanmar’s politics.

But this year’s election provides an important opportunity to assess the adequacy and effectiveness of the existing legal and institutional frameworks in ensuring equal and effective participation of women in Myanmar politics and narrowing gender gap in public life.

Most importantly, their outcome, and particularly the result’s gender composition, will reveal the level of trust and confidence Myanmar’s voters bestow on women as rule makers.

Thidar is a PhD scholar in the Coral Bell School of Asia Pacific Affairs and a member of the Myanmar Research Centre, the Australian National University.