In the referendum of 7 August 2016, Thais voted in favour of the junta-backed constitution draft that would later would become the 2017 Constitution. The referendum marked a victory for the National Council of Peace and Order (NCPO, the official term for the junta), the generals having finally managed to convince the majority of Thais to overlook the democratic activists who opposed its “democratic” roadmap. Much has happened since then. The draft took a few unexpected detours before coming into effect on 6 April 2017. To commemorate the 2016 referendum, this post reflects on what this Constitution really means for Thailand over the next few years.

First and foremost, the lack of public participation during the drafting process and in the post-referendum amendments clearly show that this is not legitimately the supreme law of the land. It is not drafted according to the general will of the citizenry—whose supremacy the government does not respect. As a result, except for political parties and a handful of ardent observers, the public have distanced themselves from the current constitutional debates over election and political party laws, leaving it to the junta-appointed Constitution Drafting Committee (CDC) and National Legislative Assembly (NLA) to chart the country’s destiny.

This is not to say that the 2017 Constitution’s drafting was a farce. Far from it: the regime put its collective heart and mind into delivering the law, framing it as an operating manual to govern the country into the future. But this “manual” is not a constitution in the liberal democratic sense. This is not a document of a common goal of the people, nor is there public respect for it, unlike the 1997 (or even the post-coup 2007) Constitutions. If necessary, the military is ready to replace this manual with another one that suits its interests better—and the public is unlikely to protest against such an action.

We don’t see much of an afterlife for the 2007 Constitution in the 2017 Constitution—unlike the 2007 document, which inherited much from its 1997 predecessor. Rights and liberties, which were the selling point of the two most recent constitutions, are almost neglected. The general impression of the 2017 charter is that it is a potpourri of local innovations and adapted foreign transplants, all of which aim to cripple the next administration.

The most notable feature is the drafters’ obsession with constraining the incoming civilian government’s powers. For the first five years, the law permits a non-MP outsider (e.g. General Prayuth Chan-ocha, junta leader and the current Prime Minister himself) to be nominated as prime minister. The first Senate would include ex officio military commanders and possibly some members of the junta’s handpicked NLA. The new mixed member proportional representation (MMP) electoral system is designed to create a fragmented parliament and a coalition government.

Moreover, the government would further be destabilised by a long policy to-do list as set out in the constitution, and a complex web of scrutiny by the judiciary and watchdog agencies. Administrative mistakes, corruption, and conflicts of interest can result in disproportionately harsh punishments. For example, one minor mistake in consideration of a financial bill can see the whole cabinet ousted on conflict of interest charges. While an effort to eradicate corruption is commendable in principle, the unrealistic goals set out in the constitution will hamper the government’s effectiveness—not to mention raise the chances of these anti-corruption safeguards’ being a pretext to harass political foes.

Here there is a paradox. In the 2017 Constitution, the CDC has designed a constitutional amendment procedure in which it is almost impossible to change the rule of the game. But the excessive constraining mechanisms outlined above deal mainly with the immediate government after the first election. This reflects the NCPO’s uncertainty about the prospects of post-coup Thailand. In their view, Thaksin Shinawatra and his men must not return to power. But in case they return, the NCPO wants to be sure that they are not free to run the country.

The 2017 Constitution limits the next government’s ability to formulate its own policy, as it has already provided a list of preferred policy choices. Chapters on the Duty of the State and the Basic Policy Guidelines address a wide range of topics, from religion to national security, from education to environment, from Thai traditional medicine to satellite frequency. Formerly, these used to be policy guidelines with no legal authority. Now these government duties are enforceable in the courts.

In addition to a policy agenda enshrined in the Constitution, the NCPO appointed the technocrat-led Reform Committee and the bureaucrat-led National Strategy Committee, both of which will prepare the National Strategy Plan for the next 20 years. In 2014, the NCPO promised Thais a massive reform to overhaul the country. It has not delivered anything substantial, but these committees serve as easy way out. The NCPO has created a platform for the reforms that shall be carried out by its civilian successor. If the reforms fail, the incumbent government would be liable to be sanctioned according to the law. But if it works out, the backseat drivers—that is, the junta—can take all the credit. Ironically, most of these experts have been engaging, again and again, in reform projects throughout the past decade. These professional reformers are unlikely to bring about any innovative changes.

Disappointingly, the 2017 Constitution avoids addressing the real cause of Thailand’s political crisis: the accountability deficit among the constitutional watchmen. Since 1997, several independent agencies (for example, the Constitutional Court, the National Anti-Corruption Commission, the Election Commission, and the National Human Rights Commission) have been created to enforce accountability on elected bodies. The charter is still based on a false premise that only civilian politicians are corrupt, so it imposes severe punishments on them for misconduct. The Constitutional Court and other watchdog agencies are assigned a greater role in keeping politicians’ legal and moral standards in check, but there is no attempt to effectively hold these unelected bodies to account. The drafters trust these watchmen’s personal integrity and moral standards, which have historically proved inadequate. Without better accountability, watchdog agencies will continue to suffer a legitimacy crisis, a result of their seemingly unfair exercises of power since 2007. Peace and prosperity under the new Constitution, as propagated by the NCPO, is nowhere in sight.

At present, the CDC is drafting other relevant laws, such as those on elections, political parties, and watchdog agencies. Some of the legislative proposals are even more radical than the 2017 Constitution itself. A person who fails to vote will be banned from voting for two years. Members of a political party must pay a membership fee in order to prove their genuine belief in the party’s ideology. A primary vote is also introduced, a mechanism which is impractical for most small to medium-sized parties.

Interestingly, there seems to be some inconsistency, or a lack of consensus, among the political elites regarding how to use their “operating manual”. The CDC is considering using different numbers for candidates from the same party in different districts. This proposal will surely generate voter confusion, and contradicts the CDC’s earlier statement that the constitution would direct voter’s focus from each individual candidate to one party. The numbering system is opposed by the Election Commission, but the CDC insists that the measure will force parties to work harder to win the people’s support.

Inconsistencies are also apparent in the case of the watchdog agencies. The NLA dismisses the current members of the Election Committee and the National Human Rights Commission, but spares the Ombudsman and the National Anti-Corruption Commission. The discrepancy in “set zero” of these agencies likely has more to do with each watchdog’s political leverage, and willingness to obey the NCPO, than real legal issues. The Election Commission is again upset, and has threatened the CDC with a court case.

The full effect of the 2017 Constitution will not be felt until the first post-coup general election, which is supposed to happen in late 2018. The unusually lengthy transitional period of 15 months, and the death of the beloved King Bhumibol, has allowed the NCPO to stay in power and arbitrarily exercise dictatorial powers under Section 44 of the 2014 Interim Charter for another year. Thailand is thus currently under two overlapping constitutional frameworks: that which was voted upon in 2017, and the 2014 Interim Charter. The two are completely different. The presence of the latter erodes any credibility of the former. The NCPO is blessed to not have to respect the rights and liberties of Thais as Section 44 supersedes any constitutional guarantees.

But an election has to come one day. A new government will navigate the roadblocks put in front it by the 2017 Constitution. After a year-long barrage of propaganda, the outcome is the possibility of a crippled and unstable civilian government dictated to by a band of unelected elites. Under the 2017 Constitution, Thailand’s political future does not look promising.

Khemthong Tonsakulrungruang is a constitutional law scholar. He graduated from the Faculty of Law, Chulalongkorn University before earning his LLM at Yale Law School. Currently he is a PhD candidate at University of Bristol’s School of Law. 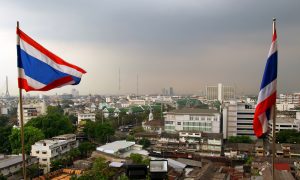 ICTS13 attendees speak out for academic freedom in Thailand 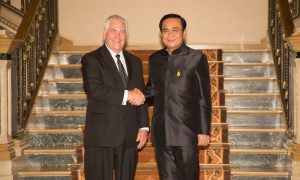 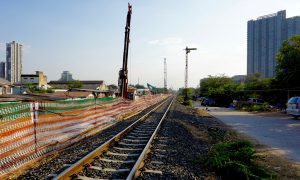