Photograph of Major H Prudmore inoculating against plague in the bazaar. Credit: Wellcome Collection (CC BY 4.0)

Nurses wearing the starched white caps and uniforms long abandoned for utilitarian scrubs in much of the world volunteer to check the temperatures of migrant workers who are returning to Myanmar from neighbouring Thailand. A group of young doctors drives up a winding dirt road to a village in the Chin Hills. At the end of March 2020, later than most of Asia, Myanmar began to mount a response to COVID-19. Reported cases commenced the inevitable multiplication from 2 to 8 and beyond.

This pandemic prompts a look back at the infectious diseases, including smallpox, plague, cholera and HIV/AIDS, which periodically sweep through the Southeast Asian region of independent realms such as Ava and Arakan, which with British colonial rule became Burma and under military dictatorship was renamed Myanmar. Although often described as isolated, for centuries Burma was a crossroads of Asia, its river valleys and seaports shaped by world trade, war and colonialism.

Thado Minbya burned bright in his mere 21 years. The warrior founder of the Kingdom of Ava in what is now central Myanmar died not by the sword but in a smallpox epidemic circa 1367. In the 18th century variola smallpox inoculation, in which healthy people were exposed to smallpox pustule material to cause immunity, was used the Kingdom of Arakan (present day Rakhine State, Myanmar.)  When Burmese King Bodawpaya conquered Arakan in 1785 his captives brought the practice to central Burma. Eventually British Colonial administrators brought more effective vaccination to Burma but their efforts were limited until the 1920s. WHO did not certify Burma as smallpox-eradicated until 1977.

Plague bacillus, dreaded for its lethal spread, is endemic to Burma/Myanmar in fleas carried by rodents. In 1855 the Third Plague Pandemic (12 million dead) rapidly followed trade routes from neighbouring Yunnan throughout China, then beyond by ship. In 1906 alone there were 8,637 reported plague deaths in Burma. As Jonathan Saha wrote in his essay on British Colonial photography, “anti-plague measures were intrusive, contested and ineffectual. Moreover, Burma’s incorporation into British India and thus further into global trading networks probably contributed to the arrival of plague in the first place.”

Cholera, an infectious water-related diarrhoeal disease, flared up in multiple pandemics during the 19th Century. The First Cholera Pandemic (1817-1823) swept through Burma in 1819. The Second Cholera Pandemic (1842-1843) took lives from the China/Burma frontier in the north to the Tenasserim seacoast in the south.

In 1853-54 cholera “carried off numbers of the population” of Arakan, in western Burma, according to C. MacNamara’s “A History of Asiatic Cholera”(1876.) British troops occupying Burma were victims and carriers of the disease. Yet another wave of infection, the Sixth Cholera Pandemic hit Burma in 1901. Cholera, which now has a vaccine and is treatable with antibiotics, still appears sporadically in and adjacent to Myanmar, with 782 cases reported nationwide in 2016.

Poor and crowded living conditions are ideal for airborne tuberculosis (TB) transmission. As it affected the labour force, TB was of particular concern to the British Colonial administration in early 20th Century Burma but their efforts and post-Independence governments’ attempts to treat the disease and curtail its spread have had only limited success. An ongoing TB epidemic with drug resistance afflicts refugee camps on the Myanmar/Thailand border and Myanmar’s largest city, Yangon.

The “Spanish” Influenza H1N1 pandemic of 1918-19 entered India at Bombay with Indian British Army soldiers returning from World War 1. India suffered the highest mortality in the massive pandemic with estimates of 10 to 20 million dead. Although Burma, then governed as part of British India, was far from Bombay, it lost as much as 1% of its population in the two-year scourge, with an estimated 60,000 dead in 1918 alone.

World War 2 was massively destructive and disruptive in Burma. Infectious diseases including dysentery and hepatitis ravaged displaced civilians, as well as soldiers on both the Allied and Japanese sides. Scrub typhus (Tsutsugamushi Disease) was an endemic rural mite-borne disease in Burma and military operations like jungle patrols or rural bivouacs increased troops’ infection  to epidemic levels. Posters warned soldiers to “avoid contact with rotting logs and decaying vegetation” where mites could dwell. 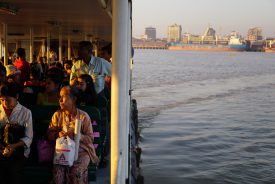 The latest on the ANU’s Myanmar Update conference series.

Efforts by health workers and international organisations to eradicate poliomyelitis (polio) in Burma (now Myanmar) have met many setbacks. Polio vaccination campaigns which are supposed to reach all children have been disrupted by civil war, displacement of civilians and inadequate infrastructure such as roads and electricity. A polio outbreak occurred on the Myanmar/Bangladesh border in 2007. Vaccine-derived poliovirus (VDPV) appeared in the central Myanmar city of Mandalay in 2011 and another VDPV outbreak happened in Karen (Kayin) State in 2019.

When the first HIV/AIDS cases began appearing in Myanmar in the 1980s a repressive military regime was in power. In an atmosphere of denial, fear and disregard, government information suppression meant that prevention information was scarce. Condoms were illegal as they were regarded as an indication of “immorality.”

Myanmar’s HIV/AIDS infection rate rapidly became one of Asia’s highest in the 1980s-90s. Sharing needles was ubiquitous among people injecting drugs, including migrant jade miners and young people in mountain villages that, although remote, were on heroin trade routes. Many people in Myanmar prefer medical shots and intravenous drips when other therapies would be as effective. Itinerant, informal “injection doctors” were untrained in safe practices. False “cures” were widely promoted.

In recent years health information quality and access, including about HIV/AIDS transmission and treatment, has greatly improved. Antiretroviral Therapy (ART) availability is good, covering 70% of adults and 80% of children with HIV as of 2018 according to UNAIDS. Unfortunately, the infection rate is still high at 19% as of 2018 (UNAIDS “HIV Sero Sentinel Surveillance”) for people who inject drugs. This high risk group has low access to HIV/AIDS prevention programs.

Early 21st century Emerging Infectious Diseases are globalised through increased travel and trade. Some of these took hold in Myanmar, while others did not. SARS (2002-03) & MERS (2015) bypassed Myanmar. H1N1 “swine flu” (2009-2010 pandemic) Influenza has become seasonal/sporadic in Myanmar with dozens of deaths in 2017 and over 36 dead mid-2019.

Emerging Zoonotic (animal to human) Avian Influenzas (“bird flu”) also affect Myanmar. The global virus-hunting project Predict discovered a new SARS-related virus in a Myanmar bat species in 2018. Myanmar has severe deforestation and a rampant wildlife trade which may add to risk of zoonotic crossover of new viruses. Identifying these potential risks is crucial, but the fieldwork of Predict (a USAID with partners project) is now defunct, its funding cut off by the US Government in 2019.

After decades of military spending utterly diminishing healthcare spending, which has been as low as -2% of GDP, Myanmar’s public health programs have been improving but are still underfunded. Severe economic inequality spurs employment-seeking migration within Myanmar to the jade mines of the north and to other countries like Thailand and Malaysia. Endless civil war and ethnic oppression cause involuntary displacement of people, increasing the risk of infectious disease hot zones.

Regional disparities and inaccessibility are major factors in Myanmar’s health crises. People of Myanmar’s mountain regions often endure gaps in immunisation and lack access to medical facilities. A 2016 measles outbreak killed 68 Naga people, mostly children, in a remote part of Sagaing Region and a TB outbreak killed 14 people there in 2017.

Healthcare needs of the Rohingyas of Rakhine State have been grossly neglected, including essential childhood immunisations. Medical workers at Bangladesh refugee camps for Rohingyas who fled Myanmar in 2017 had to give cholera vaccinations to all new arrivals. Outbreaks of diphtheria and chickenpox have rippled  through the vast camps. Continuing internet and cellphone blackouts in the Bangladesh camps as well as Rakhine and neighbouring Chin State block health information and care access for extremely vulnerable communities.

As a March 21, 2020 editorial in The Lancet stated, “Presently, health-care workers are every country’s most valuable resource.” A commendable surge of medical volunteering and mutual aid is taking place in Myanmar. The country has numerous dedicated, competent health professionals, often women, including in Ethnic Armed Organisation conflict regions. But it remains to be seen if their efforts can prevent the COVID-19 pandemic from replicating the devastation of previous epidemics. 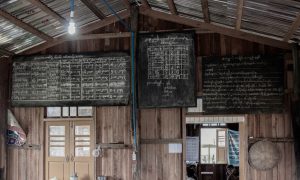