Like the rest of the world, Myanmar is grappling with the COVID-19 pandemic. Due to extremely limited testing capabilities, the rate of infection and number of deaths due to coronavirus is unknown. As the Myanmar government has begun reporting cases, there is widespread anxiety among the public about the risks, preventative actions and ways in which livelihood can be secured amid the growing uncertainty in the country and around the world.

During a pandemic, the right to information is more important than ever. Access to up to date, independent and credible sources of information can save lives. During a pandemic, the role of media as a watchdog on government abuse, corruption and mismanagement is also essential. Transparency and public scrutiny can help correct government wrongdoing and prevent unnecessary deaths.

It is of great concern that instead of ensuring freedom of expression and the right to information, Myanmar authorities are taking advantage of the pandemic by persecuting independent journalists, attempting to shut down media sites and further restricting public access to information. An urgent response is needed to stop attacks on the media, that are putting lives and Myanmar’s fragile democracy at risk.

On March 23, Myanmar’s Ministry of Home Affairs designated the Arakan Army (AA) as a terrorist group under the Unlawful Associations Act.

The next day, the government issued an order to ban access to a number of independent news websites for supposedly spreading misinformation. Sites targeted include Development Media Group (DMG), Narinjara, Karen News, Voice of Mandalay and a number of other independent news agencies, including some that operate in indigenous languages. Mytel and MPT, the two telecommunications operators that are under full and partial ministry and military control, complied. The order was initially resisted by Telenor, but on March 30, Telenor complied with the ban, despite seeing it as unlawful.

In addition, an internet blackout remains in place for parts of western Myanmar, denying residents information regarding Covid-19. All telecommunications operators are complying with the blackout, risking people’s lives.

Myanmar authorities are now using the terrorist designation of AA to target independent media. Civil society could be next.

On Monday March 30, Nay Myo Lin, the editor in chief of Voice of Myanmar, a Mandalay-based news site, was arrested, purportedly for interviewing an AA member. He has been charged under anti-terrorism laws.

On Tuesday, March 30, the office of Narinjara News was raided and three reporters were detained. Computers were also seized, and there are serious concerns for the safety of confidential news sources who authorities may be able to identify through files on confiscated computers. The Editor-in-Chief of Narinjara News, Khaing Myat Kyaw remains in hiding and anti-terrorism charges have been filed against him.

On the same evening, police raided the house of Hline Thit Zin Wai (AKA Tha Lun Zaung Htet), the Editor-in-Chief of Khit Thit Media, a Yangon-based independent news site, for republishing the Voice of Myanmar interview with an Arakan Army member. Tha Lun Zaung Htet was not home at the time and is now in hiding. Police have put his wife and one-month-old son under surveillance and subjected them to intimidation, along with previous Khit Thit editors and the Khit Thit publisher. 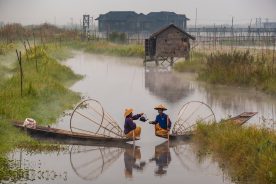 The Editor-in-Chief of DMG also remains in hiding, since authorities attempted to arrest him last year. DMG is now at a high risk as their office can be raided at any time and their reporters could be arrested.

Those who are arrested cannot expect a fair trial. Despite early moves to postpone court hearings as a preventative measure during Covid-19, trials are resuming but observers have been banned. Like the kangaroo courts during the military dictatorship, journalists and activists will be tried behind closed doors with no accountability.

As a result of this wave of arrests, there is growing fear among other journalists that they will be targeted too. Some are toning down critical reporting and preparing to send reporters into hiding.

While Myanmar authorities tighten their grip on civic space, military action in Rakhine State is intensifying, and there are reports of crimes against humanity as the military targets civilians and attacks displaced people. It is urgent that independent media and civil society monitor and report on the conflict. Perpetrators must be held accountable for serious human rights abuses. Local victims and witnesses must be allowed to have a voice.

Myanmar authorities are abusing the COVID-19 pandemic to crackdown on media, persecute dissidents and tighten restrictions on civic space. International support is needed for Myanmar’s coronavirus response. It is imperative that this support also involves pressure for the Myanmar government to cease the crackdown on freedom of expression, drop charges against journalists and human rights defenders; to unblock news websites and to restore internet to all areas of Myanmar. If human rights are deprioritised during the coronavirus response, the consequences could extend far beyond pandemic.

*The writer is based in Myanmar and needs to remain anonymous due to security concerns.

What does world heritage inscription means in a country where human rights abuses are ongoing. 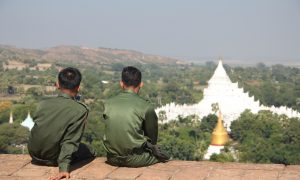