A recent University of Melbourne analysis indicates that Indonesian police killed an estimated 49 suspected drug dealers in the first six months of 2017. That  is a sharp rise from 14 such killings in all of 2016 and 10 in 2015. Ominously, more than one third of the total police killings from January to June 2017 occurred after the suspects had surrendered to police.

That increase in police killings of drug suspects has coincided with a series of public statements by senior Indonesian government and National Police officials expressing support for Duterte’s anti-drug campaign. But what Indonesian government and police officials overlook in their full throated support of a Duterte-style drug war is the horrific damage it has inflicted on Philippine society.

Indonesia’s National Narcotics Agency (BNN) head, Comr. Gen. Budi Waseso kicked off those expressions of support in September 2016 by calling for Indonesian police to adopt Duterte-style “drug war” methods. Using language reminiscent of Duterte’s public disparagement of the humanity of drug users, Waseso sought to justify such a lawless approach by stating that “The life of a [drug] dealer is meaningless.” He reiterated that stance in July with praise for Duterte’s drug war, saying that it “shows he is taking care of his citizens.”

Waseso is no outlier. On 20 July, the National Police chief, Gen. Tito Karnavian, made an explicit reference to Duterte’s campaign when unveiling a new approach to combating drugs in Indonesia: “shooting drug dealers.” The next day, President Joko “Jokowi” Widodo issued the equivalent of a “shoot to kill” order by instructing police who encounter foreign drug dealers who resist arrest to “Gun them down. Give no mercy.”

Those views seem to have been persuasive. On 9 August, Jakarta’s police chief said that when dealing with suspected drug dealers, “sending them to God” would take priority over arrest and prosecution. Inspector General Idham Azis’ not-very-veiled threat to summarily execute drug suspects was compounded by his pledge to “take responsibility for his subordinates’ actions if they shoot alleged drug traffickers during raids.”

Duterte boasts that the more than 7,000 victims of the drug war have been “drug lords,” but Indonesia’s officials should take note that the profile of the vast majority of those victims indicates it’s more accurately a war on the poor. Human Rights Watch field research found that government claims that the deaths of suspected drug users and dealers were lawful were blatant falsehoods.

Our research painted a chilling portrait of mostly impoverished urban slum dwellers being gunned down in state-sanctioned “death squad” operations that ignore rule-of-law protections. Interviews with witnesses and victims’ relatives and analysis of police records exposed a pattern of unlawful police conduct designed to paint a veneer of legality over extrajudicial executions that may amount to crimes against humanity. The investigations revealed that police routinely execute drug suspects and then cover up their crimes by planting drugs and guns at the scene.

Efforts to seek accountability for drug war deaths have gone nowhere. Duterte and some of his key ministers have praised the killings as proof of the “success” of the anti-drug campaign, making them potentially culpable for incitement and instigation of crimes against humanity. Duterte and his supporters have also threatened, harassed and intimidated any institutions and individuals—including United Nations officials—who have sought accountability for abuses linked to the drug war.

On August 16, Duterte extended that campaign to human rights organisations, calling for police to shoot human rights activists “who are part of [drug activity]. If they are obstructing justice, you shoot them.”

Indonesia is already wrestling with the toxic legacy of impunity for the mass killings of least 500,000 people in 1965–66, when the government gave free rein to soldiers and local militias to kill anyone they considered a “communist.” Unless Jokowi speaks out forcefully against a Duterte drug war model of crime control, he risks being responsible for a mass killing campaign that could demolish Indonesia’s fragile and hard fought-for rights and freedoms. Phelim Kine is deputy Asia director at Human Rights Watch and supervises HRW’s work on Indonesia, Philippines and Afghanistan. You can follow him on Twitter at @PhelimKine. 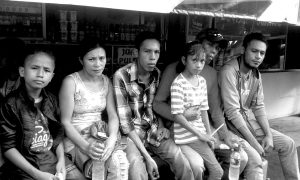 It’s one step forward, two steps back for the right of Papuans and Moluccans to peacefully advocate for self-determination.