The Indonesian government has been doing something remarkable over the past year with its political prisoners in Papua and West Papua provinces: Releasing them.

The Ministry’s reticence to confirm that reduction is curious, not just because it means freedom for dozens of Papuans unfairly prosecuted and imprisoned for merely exercising their rights of freedom of expression and association. It also indicates that President Joko “Jokowi” Widodo is making good on a pledge to release Papuan political prisoners as a means “to stop the stigma of conflict in Papua.”

In May 2015 Jokowi took the unprecedented step for an Indonesian head of state to personally present clemency documents authorising the release of five Papuan political prisoners at Abepura prison in Papua’s provincial capital of Jayapura. At that ceremony, he announced that the release of those prisoners was “just the beginning” of an official effort to empty Papua’s prisons of political prisoners, with an aim to “create a sense of peace in Papua.” The Indonesian government has legitimate security concerns in Papua stemming from the ongoing, low-intensity conflict with the armed separatist Free Papua Movement (Organisasi Papua Merdeka or OPM). But the government’s disproportionate response to that threat has included decades-long restrictions on access to Papua by foreign media, academics, and observers as well as a failure by security forces to distinguish between violent acts and peaceful expression of political views.

Unfortunately, Jokowi’s moves to purge Indonesia’s prisons of Papuan political prisoners will prove short-lived unless the government abolishes the abusive laws against makar, or treason, that put those prisoners behind bars in the first place. The government has long wielded Articles 106 and 110 of the Indonesian Criminal Code to impose multi-decade prison terms on peaceful protesters advocating independence or other political change. Many such arrests and prosecutions are of activists who peacefully raise banned symbols, such as the Papuan Morning Star and the South Moluccan RMS flags. (Human Rights Watch takes no position on the right to self-determination, but opposes imprisonment of people who peacefully express support for self-determination.)

And Papuans have a lot to complain about in terms of a lack of accountability for decades of abuses by the security forces. Heavy-handed responses to peaceful activities have resulted in numerous human rights violations.

Over the past decade, Human Rights Watch has documented dozens of cases in which police, military, intelligence officers, and prison guards have used unnecessary or excessive force when dealing with Papuans exercising their rights to peaceful assembly and association. Although the government announced in April 2016 the creation of a task force to develop a roadmap to investigate and resolve more than a dozen Papua’s most serious past human rights abuses, it has failed to provide it with the authority and funding to do so.

And the Jokowi government has itself failed miserably to provide accountability for more recent abuses. Exhibit A is the December 8, 2014 killing by security forces of five Papuan youths in Enarotali in Paniai regency of Papua. Despite three separate official investigations into the shootings—bolstered by Jokowi’s December 2014 pledge to thoroughly investigate and punish security forces implicated in those deaths—there has to date been zero accountability. And despite official pledges of a thorough probe into the August 1, 2017 police killing of 28-year-old Yulius Pigai of West Papua’s remote Deiyai regency, we will likewise probably never know the circumstances of his death.

Meanwhile, Jokowi is turning a blind eye to the plight of Indonesia’s other political prisoners, from Ambon in the Moluccas (Maluku) archipelago. A total of 13 Moluccan political prisoners, the last of 28 prisoners convicted for treason for performing a protest dance in June 2007, remain behind bars in the prisons of Nusa Kambangan and Porong on Java, roughly 3,000 kilometres from Ambon. That distance, and the onerous financial expense of travel between Ambon and those prisons, mean that those 13 men, mostly farmers and fishermen, have not seen any family members since their 2009 transfer. The isolation has inflicted profound emotional, psychological, and emotional stress on both the prisoners and their families.

Filep Karma (centre, in cap) meeting with Minister Yasonna Laoly together with a HRW delegation in April 2016. (Photo: Andreas Harsono)

In April 2016, Indonesia’s Minister of Law and Human Rights Yasonna Laoly orally committed to a visiting Human Rights Watch delegation in Jakarta to arrange those prisoners’ transfer to detention facilities in Ambon. But more than a year later, they remain behind bars, far from their loved ones, with no hope of seeing their families until their sentences elapse in 2027.

Jokowi’s efforts to release political prisoners are a long overdue positive change, but Indonesia can’t claim to be a democratic, progressive state while still locking up citizens for merely expressing their rights of freedom of expression and association. 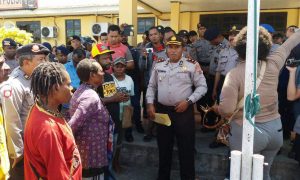