A trooper of the Gurkha Contingent of the Singapore Police Force gives directions to a member of the public. Author unknown/ CC BY-SA

In diaspora scholarship, one can find instances of diasporic elites/groups forming associations for various collective ends. In recent times, there has been a greater appreciation of the role of internet and social media platforms in forging new connections, strengthening or renewing old ties and enabling new possibilities, among others, in the diaspora. These are among the ways that Southeast Asia’s Nepali diaspora is carving out new spaces of belonging for themselves.

The Nepali diaspora in Southeast Asia is hardly as well-known as the Chinese or Indian diaspora. Surrounded by China to the north and India to the south, east and west, Nepal is commonly perceived in terms of its smaller size relative to its two giant neighbours. In fact, Nepal is bigger than Brunei, Singapore and Timor-Leste. Nepal also has diaspora spread over 100 countries.

In contrast to those living in the conventional migration destination countries like the US, the UK and Australia among few others, not much is known about Nepali diaspora in Southeast Asian countries where they have been living for generations with no direct links to Nepal. In some instances, for instance in Thailand, they have been scarcely noticed by the mainstream population. Thailand’s Nepali diaspora consists of Thai Nepalis and Burmese Nepalis (excluding Nepali expatriates who are temporarily based in Thailand).

The Nepali population in Southeast Asia is ethnically diverse with earliest settlers being the Nepali recruits, known as Gurkhas from a few ethnic groups considered martial races, in the British colonial army. The settlement of the Gurkhas in Myanmar and Thailand stimulated further migration of more Nepalis with different ethnic and caste backgrounds.

Associational dynamics
There are a number of organised ethno-cultural associations of different sizes in Thailand such as Tamang Samaj Thailand, Newar Association Thailand, Thai Myanmar Magar Gurung Association and Kirat Literary and Cultural Society among others. Most of the associations of this nature have been recently established and have networks, and in some cases history, extending to Myanmar. As the diasporic context throws into sharp relief their belonging to the nation-state of Nepal, people of Nepali origin have generally had incentive and resources to work towards preserving and promoting Nepali language, national symbols and Hinduism—the erstwhile state religion in Nepal. However, no such incentives and resources exist for the preservation of specific ethnic cultures and mother tongues.

Scholars have observed the phenomenon of intra-community divisions among diasporas. Differences within any diasporic community can emerge from the simple fact that it is usually not a homogenous population defined by homogenous interests. In conventional migration destination countries, it is evident that Nepalis tend to split along ethnic lines in the diaspora as soon as they have sufficient numbers in their ethnic folds. Thus, ethno-cultural associations emerge which serve the leadership aspirations and community interests of the heterogenous diasporic elites which are not well accommodated in pan-Nepali associations.

The same dynamics are conceivable to an extent among Southeast Asia’s Nepali diaspora.

If one examines the speeches of the diasporic leaders affiliated to the ethno-cultural associations, it appears that their identity discourse is partly inspired by the identity politics and movement of Nepal which has been going on since 1990. However, the discourse is apparently purged of the political elements and retains the idioms of cultural preservation and promotion. This is in contrast to Nepali diaspora in the UK, the US and Australia. The difference in homeland orientation is a result of their dissimilar migration trajectories and histories.

The migration history of Nepalis in Southeast Asia goes back to the time when today’s working and migrant visa regimes didn’t exist. In the age before the internet and well-connected cheaper transportation, successive generations of the early Nepali settlers in Myanmar and Thailand lost direct links to Nepal as they became culturally integrated into local contexts. Formal educational institutions, where Nepali was not the language of instruction, also worked towards assimilating later generations into local ways of life.

In a speech at a cultural event organized by Thai Myanmar Magar Gurung Association in Bangkok, the president of Thai Nepali Association (TNA), an autonomous pan-Nepali association established in 2010, underlined the importance of preserving and promoting culture and identity of different Nepali ethnic communities in order to ensure the survival of common Nepali identity. In this way, the possible rifts within the diaspora that may result from the existence of multiple associations formed along ethno-cultural lines are downplayed.

Compared to other Thai Nepali/Burmese Nepali organizations in Thailand, TNA engages with Nepal in a more extensive way. For one thing, it helped build new houses for Majhi community in rural Nepal in the aftermath of the devastating earthquake in 2015. Its organisational anthem is also sung by two popular singers from Nepal. Its events occasionally host celebrities and other well-known faces from Nepal, alongside officials from Embassy of Nepal in Bangkok and representatives of Non-Resident Nepali Association Thailand (NRNA Thailand).

NRNA Thailand came into existence in 2005 as a Thai branch of Non-Resident Nepali Association (NRNA) which has presence in many countries around the world and was established upon the initiative of the Nepali diasporic elites in 2003 as a global movement and network to bring Nepali diaspora, outside South Asia, under one associational umbrella. NRNA has legal status in Nepal through the Non-Resident Nepali Act, 2064. The president of TNA in an interview succinctly portrays NRNA Thailand as a bridge that connects people of Nepali origin in Thailand with Nepal and Nepali diaspora across the world. The other significant bridge is internet and social media.

Social media connections
The diasporic associations have social media presence in varying degrees. Hence, people in Nepal have become increasingly aware of this diasporic community as videos of the latter’s cultural activities are circulated on social media platforms. They can watch this Southeast Asian Nepali diaspora on YouTube and Facebook dancing to Nepali songs, giving speech in Nepali, celebrating Nepali festivals, attending events in their respective cultural dress and so forth. The case of Sumi Limbu, a Thailand-based Burmese Nepali artist, is instructive to understand the extent to which social media has connected not only Nepal and Nepali diaspora but also the geographically scattered members of Nepali diaspora with one another.

Sumi Limbu came into the limelight in 2015, after she gave an interview with a Nepali YouTube channel based in Hong Kong. During the interview, Limbu shed light on how life is for her and for Nepalis at large in Thailand and Myanmar. Limbu was born in Myanmar and moved to Thailand at a young age. There she performed in Nepali music videos as well as in occasional Nepali cultural events held in Bangkok. Towards the end of the interview, Limbu shared that she was looking for her relatives from her ancestral village called Libang in eastern Nepal and urged potential relatives from Libang to get in touch with her via social media. She also complained that Nepalis in Nepal have forgotten Nepalis in Southeast Asia and stated that the reverse was not true. 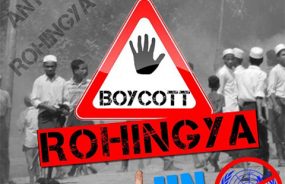 How new technologies drive competing narratives on a humanitarian crisis.

In a matter of days following the interview, Sumi Limbu was able to find her uncle who was then based in Hong Kong. In a follow-up interview with the same YouTube channel in 2016, she narrated more changes that occurred in her life after the first interview. The interview generated a lot of goodwill for her to the point that she received an offer to act in a movie to be made in Nepal. Months after the second interview, she left for Nepal to visit her ancestral village and to film Thatthalo (native land), in which she was cast as a lead actress. The 2018 film depicted social life in a Limbu village and touched upon issues like migration. It premiered in Hong Kong followed by screenings in Nepal and the UK. Limbu’s journey is illustrative of the real-life connections that social media can forge between people across geographical boundaries.

It is understood that communication is central to the formation of diaspora. There is no doubt that social media has greatly pushed the frontiers of communication. Furthermore, the polyvocality of social media can bring to fore diverse meanings of being in the diaspora. Such articulations may enhance the discursive constructions of identity and belonging as advanced by several diasporic associations, or they may also contest the dominant projections and discourses. In any case, what means to be a Nepali and a member of any Nepali ethnic community is subject to constant negotiation, more so in the increasingly interconnected spheres of online and offline worlds. “Prathet ku mi” has reopened the most sensitive wound of Thailand’s past for a new generation.