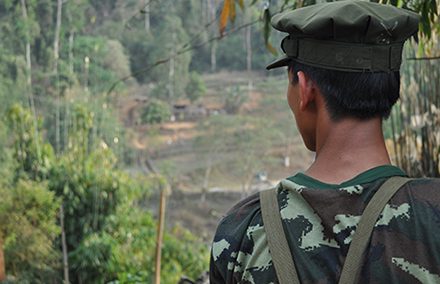 Ethnic conflict and the vote

Failure to respect the needs and aspirations of Myanmar’s many ethnic minorities was the main catalyst for the outbreak of conflict immediately upon independence in 1948, which over the past seven decades has brought the country to the brink of disintegration and ruin.

Despite significant progress in the peace process under the post-2011 quasi-civilian government, negotiations have yet to yield a durable resolution of what has become the world’s longest running civil war.

With an estimated 30 to 40 per cent of the country’s 51 million population made up of ethnic people, the ethnic vote is expected to play a crucial role in the outcome of tomorrow’s elections.

Whether the vote, and its outcomes, will see ethnic people’s aspirations properly represented in the political landscape is one of the key questions as Myanmar heads to the polls.

However, this territorial identification does not fully reflect Myanmar’s ethnic diversity since each of the ethnic states has its own minorities and many ethnic people live in Burman majority dominated areas too.

The failure of the post-Independence democratic government to accommodate ethnic nationalities’ claims for political autonomy and control over natural resources caused the collapse of the country’s first democratic experiment in the 1950s and the establishment of a repressive military regime, which only handed over power to a quasi-civilian government in 2011.

Many ethnic nationalities still consider the current structure of the state, based on the pro-military 2008 constitution, to be illegitimate. Several of the main ethnic political parties boycotted the polls in 2010 for this reason.

However, with significant reforms now underway, including the first promising peace process in the country’s history, ethnic nationalities are clearly seeing the upcoming elections as a chance to strengthen their position in mainstream politics. As a result, of the 91 parties which are contesting the elections, around two-thirds represent specific ethnic or religious groups.

With a democratic transition and peace process now finally underway in Myanmar, a unique opportunity exists to better take account of the country’s ethnic diversity. Conversely, failure in this area could well see the collapse of yet another democratic experiment and, at worst, a return to full-blown civil war.

If free and fair, this election represents a real opportunity to give a political voice to Myanmar’s diverse ethnic nationalities and ethnic landscape. Issues of ethnic conflict and representations have consequently occupied the centre of the campaigning efforts in ethnic areas.

While Aung San Suu Kyi asserts that voting for the main opposition party, the National League for Democracy, offers the best prospects for peace, the ruling Union Solidarity and Development Party has emphasised its attempts to sign a nationwide ceasefire with all ethnic armed groups.

However, the failure to get more than 8 out of 20 insurgent groups to sign the agreement demonstrates that as long as ethnic needs and aspirations are not fully accommodated, ethnic conflict will remain the major challenge for the country’s political future.

Since around 40 per cent of the parliamentary seats cover constituencies where ethnic nationalities are dominant, ethnic parties will likely play a pivotal role in the coalition building needed to select the next president in case none of the main parties wins a clear majority.

The NLD’s promise to implement a federal system of government, which is perceived as a major condition for the fulfilment of ethnic claims, demonstrates the effort to court ethnic people in order to ensure their support to form a coalition government led by Aung San Suu Kyi’s party. Although ethnic parties have been showing a limited capacity to mobilise and energise the public, they are expected to gain votes in ethnic constituencies because of identity voting. However, apart from Rakhine state’s Arakan National Party, which succeeded in forming a united voice to represent Rakhine people’s interest, ethnic parties in other areas are characterised by a risky fragmentation.

This does not only imply a higher risk of co-optation and corruption by the USDP, but also a splitting of the votes which is likely to undermine ethnic representation. Indeed, with a first-past-the-post electoral system, only a small proportion of the parties contesting the election will be able to win seats.

Provided that it is free and fair, the election is expected to have a major impact on Myanmar’s political landscape, with a potential shift in power from the old elite to the opposition. Yet, the significance of the legislative power granted to ethnic representatives, and therefore the capacity to represent ethnic needs and aspirations, remains limited.

Although ethnic parties are expected to win many seats in the national legislature based on identity voting, it will unlikely be on a sufficient enough scale to sway substantial influence in the parliament.

The impact of the election might be greater at the state level, where ethnic parties are likely to win a majority of seats in state assemblies. However, there won’t be any changes in the power structure: unless the constitution is amended, state assemblies won’t be able to choose their own chief minister. Such a scenario is in theory possible if the NLD wins a landslide, but it will still remain subject to the military’s unpredictable reaction.

The election impact will also be limited as a number of ethnic groups are excluded from the vote.

The cancellation of Temporary Registration Certificates in March 2015 has resulted in the disenfranchisement of thousands of voters in ethnic areas, including stateless Rohingyas, Kokang, Wa and other minorities of Chinese or Indian descent. In addition, the Union Election Commission has cancelled voting in 600 conflict-affected villages around the country.

Although hopes for the fulfilment of ethnic claims are fairly limited, the electoral process has very positive impacts on ethnic people through the promotion of a democratic culture. As debates on social media indicate, people are generally becoming aware of their right to have a say on the government’s performance and of the government’s responsibility to address their concerns.

Even if such progress is less visible and sometime absent in some ethnic areas, ethnic people will ultimately benefit from a trickle down effect generated by this process.

While far from bringing an end to ethnic conflict, this election does represent a positive step in bringing about the development of a democratic culture in ethnic areas.

The challenge of the next government will be to consolidate such progress through a national political dialogue, which unites parliamentary processes and ethnic ceasefire talks.

Cecile Medail is a PhD scholar at UNSW Canberra researching challenges for democracy in a multi-ethnic Myanmar.