Farewell to a King

PoP’s archaeologist Michael Leadbetter on the cremation ceremony for the King of Cambodia and the passing of the King of Thailand and Lee Kuan Yew.

‘It’s a song, it’s a prayer, it goes forward and back and round and round until the monarch returns to the river.’

It’s Febuary 2013; 99 days ago the King of Cambodia died. Tomorrow, on the hundredth day in a special palace he will be cremated and his remains will become one with the land.

I’m with photographer Eleanor Barz in the bar of the Phnom Penn Foreign Correspondents Club across the road from the palace, and weaving between our words is the chanting and prayers of the city singing for King Norodom Sihanouk. It’s the same phrase, broadcast through speakers that line the main streets of Phnom Penh. It starts at sun rise and is sung into the evening for four days. Tomorrow the powerful women and men of the region, -the generals, diplomats and the grieving royal family will witness the cremation of Cambodia’s king.

The usual bustle and kerfuffle Phnom Penn has been re-ordered. It’s not bright and colourful. Gone are the pop up markets and mopeds. Like now in Bangkok, the city is in the white and black of mourning.

The death of the former king has brought Hun Sen’s Khmer state out in force. This is what the barriers and the soldiers throughout the city are here for. Even after the death of the national father, the state and government are firmly in charge. The wide French colonial boulevards of Phnom Penn are cut across, sliced through with barbed wire and barriers and hastily painted red and white and thrown up as road blocks. They ripple out in concentric rings from the palace and cremation ground at the heart of the city, prohibiting mourners from getting too close to the official ceremony.

The first of the perimeter rings runs through the middle of the Foreign Correspondents Club accommodation. Our room is on one side, and the bar, lobby and hazy Mekong are on the other. The soldiers manning the perimeters will let you leave from the centre, but not let you back in, as we found out on our way back from breakfast on the first morning.

The evening is more relaxed and a lot of the soldiers leave the barricades. We put on white mourning clothes, pin white and black ribbons of remembrance to our shirts and walk along the river and stand with the grieving people able to make it through to the gates of palace and cremation ground.

The last three years have seen the deaths of three leaders that have reshaped Southeast Asia since WW2, throughout the Cold War and into the dawn of the twenty-first century. Two Buddhist monarchs, His Majesty King Norodom Sihanouk of Cambodia who died late 2012, His Majesty Bhumibol (Rama IX) the King of Thailand who died last week and Singapore’s formidable leader Lee Kuan Yew who died in 2015.

Lee Kuan Yew and the King of Thailand are the better known leaders. Both sought to combat communism through promoting development, trade and education. Lee Kuan Yew looms large over Singaporean history, indeed the story of Lee Kuan Yew has become the ‘official’ Singapore story. In general the people of Thailand have over the decades come to view the king as father of the nation as a result of the respect and care he showed for the people. Until recent years the Thai King frequently travelled across the country, promoting public health, development, research and education from the village level up. The grief currently shown by the Thais attests to the respect that the people have for the king and his hard work. They are grieving for a man who cared about their well-being and went about his royal duties and humanitarian work with dignity and great composure, in contrast to other leaders of the region. The King of Thailand and to a lesser extent Lee Kuan Yew have reputations for consistency and as bringers of stability.

Lee Kuan Yew and HM The King of Thailand 1977 http://www.nas.gov.sg/archivesonline/online_exhibit/odetoFriendship/html/King_IX/index05.htm

Though less well known on the international stage, King Norodom Sihanouk is a significant figure in Cambodia, having been the only constant political leader throughout most of living memory. King Sihanouk remains a far more controversial and publicly complicated figure than the King of neighbouring Thailand. Sihanouk became King during the WW2 Japanese occupation of Cambodia through his mother’s line. After the war Sihanouk lobbied for the country’s 1953 independence from France. Soon after he abdicated the throne to become Prime Minister, whilst his father became king. Following his father’s death in 1960, Sihanouk succeed to the throne and became Supreme Leader. By the end of the decade, 1970 he was ousted by the General Lon Nol and went into exile in Beijing. After backing the Khmer Rouge and becoming head of state, he had fallen out of love with the Khmer rouge and put under house arrest. After the collapse of the Khmer Rouge regime he became president again and then king.

King Sihanouk was a highly adaptable figure. Throughout his life he remained a hugely popular and during Cambodia’s post Khmer Rouge recovery he was able to use the traditional monarchy, his love of the people and Buddhism to unite the nation. As the only constant in Cambodian politics he showed himself adept at bringing diverse groups together, and he was perhaps the only symbol which could be used to reconcile the divided people of post Khmer Rouge Cambodia. He re-abdicated/retired in 2004, handing the throne to his son Norodom Sihamon. The former king died in 2012. As a monarch he holds the ironic record for abdications and oustings. He is an unusual figure, but mourned as one always central to the tumultuous tides of Cambodian politics.

Back in Phnom Penn sitting in our room, hearing the chanting outside, the television plays a continuous loop of the many films the King directed and starred in, several of which were filmed in North Korea. The Kings cowboy-esque westerns seemed to be particularly popular.

The cremation ceremony for the King of Cambodia comes to an end. We watch, silent. The chanting procession takes the ashes down to the barge moored opposite the Foreign Correspondents Club. The ashes in their diamond urn are taken aboard the golden vessel. The mooring ropes are loosed and the king makes his final journey, floating out onto the Mekong to be scattered across the waters, in death becoming one with the running river, the symbolic bringer of wealth, prosperity and life to the Kingdom of Cambodia.

Eleanor Barz is a freelance photographer. She holds an honours degree in Cultural Studies. She has been involved with a number of international projects including UN AIDS Bangladesh, and FEALAC Indonesia. Eleanor lived in Singapore for a number of years. She is currently based at the University of Sydney as a tutor. Nostalgic videos of Suharto reveal that the flaws of his rule were obvious to those who lived through it. 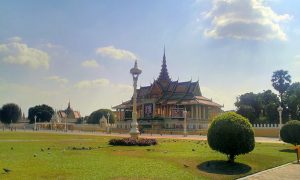 Farewell to a King

Michael Leadbetter reports on the funeral for the King of Cambodia & the passing of the King of Thailand & Lee Kuan Yew.