In December 2018, Indonesian President Joko Widodo (Jokowi) handed out 92 decrees designating social forests (Perhutanan Sosial), a forest management scheme given to people living near forest areas, to 8,165 families and cooperatives (koperasi) in Jambi. The decrees covered over 91,000 hectares of forests, a fulfilment of a promise by Jokowi to grant access for people across Indonesia to manage their own forests for economic prosperity. With these decrees, farmers are allowed to cultivate forestry and non-forestry crops.

Concessions are now not merely exclusively given to companies, Jokowi said, but also to farmers through cooperatives (koperasi). Many in Jambi and Indonesia at large warmly welcomed Jokowi’s move, arguing that the concessions will not only benefit the livelihoods of farmers, but also reduce land conflicts between people and corporations.

A year passed, and everything seemed to be okay—until one day in September 2019, my fellow villager, Syarif, could not hold his temper after finding out his priceless rubber plantation had been cleared by bulldozers without his consent. With the help of the Teluk Langkap village head, he found out that the bulldozers allegedly belonged to a pulp and paper company which had established a partnership with Koperasi Teriti Jaya, a koperasi founded by some residents of a nearby village. The koperasi had secured a People’s Forest (Hutan Tanaman Rakyat, HTR) concession, part of the Perhutanan Sosial program.

Syarif was not the only victim. Every rubber plantation owned by Teluk Langkap residents as well as those belonging to dwellers of other villages in Sumay District have been included in the koperasi’s over 2,500-hectare concession area. The bulldozing currently continues, but my fellow villagers are adamant they will defend their lands at any cost. Clashes are just a matter of time.

Jokowi’s HTR concessions to koperasi have created a new pattern of land grabs by companies, potentially exacerbating existing conflicts and starting new ones. Without careful evaluation and supervision by the Indonesian government, a koperasi can conveniently serve as an extension of a company, acting as if it were an official representation of farmers. This “fictional” (fiktif) koperasi is usually formed with neither discussion nor consent from farmers whose lands and plantations are included in concession rights proposed to Jakarta.

Jambi: a land of land conflicts

What is unfolding in my village is a continuation of a long list of land conflicts in Jambi, not least in my regency, Tebo. With its immense amount of forests and relatively small population (1.5 million in 1980), Jambi was once a haven for wildlife, indigenous people and local communities. In the 1970s, 72% of Jambi’s vast landscape was forest. But now, with a population of 3.5 million, the proportion of forest has plunged to 17%. Logging activities (legal and illegal), plantation concessions, transmigration programs, forest fires, and mining and oil drilling activities are among the leading causes of this massive forest loss.

In Tebo, forest comprises 43.52% of the regency’s total area, yet it shrinks rapidly day by day. This immense forest area has created both opportunities and problems for Tebo residents. When I was a child, many in my village worked as seasonal rattan, dragon’s blood and damar gum seekers in the forest. My father in fact used to be a trader of these precious forest products with Suku Anak Dalam (Jambi’s indigenous people, the SAD) among his employees. The SAD regularly collected harvests and sold them to my father in exchange for clothing, food and sometimes money.

Hoping for more sustainable income and better education for their children, my parents and dozens of other villagers started rubber plantations in the 1980s. Back then, there were barely any conflicts over land.

But things have dramatically changed. Plantations, mining and even ‘conservation’ companies owned by conglomerates have flocked to forest areas near my village like ants, eliminating rattan and damar gum professions, kicking out the SAD from their forest homes, and clearing people’s plantations. The consequence of the companies’ activities are clear: for the past three years, Jambi has featured in the 10 regions of Indonesia with the highest numbers of land conflicts. In 2020, Jambi even ranked second in the list.

In many conflicts, farmers have been criminalised, jailed, tortured and even killed. In one Tebo district, farmers’ crops were poisoned by a pulp and paper company using drones. Such deadly events, however, never bring companies to justice.

But with many concessions being given to koperasi, some of which are fictional and acting on behalf of corporations, a new pattern of conflict is now emerging. It is no longer people head-to-head with companies, but villagers against residents who run koperasi.

Fictional koperasi are a long-standing problem in Indonesia, mainly in the business sector. In the last 4 years alone, the Indonesian Ministry of Cooperatives and SMEs (Kemkop UMKM) has dissolved 81,686 koperasi. In the forest sector, however, fictional koperasi are a new phenomenon with land conflicts resulting from their activities still in the initial stages.

In the case of the koperasi in conflict with my village, the Head of Cooperatives in the Tebo regency’s One-Stop Integrated Services and Investment Office, Iswandi, stated that Koperasi Teriti Jaya has not submitted Reports of Annual Members’ Meetings (RAT) since its inception in 2016 and still operates without a Cooperative Registration Number (NIK) as evidence of its legality. Many owners of rubber plantations like Syarif my parents were never invited for discussions over the founding of the koperasi.

The koperasi cleverly collected identities of Teriti Village residents as if they were members and land owners of the ‘forest’ area proposed to Jakarta for concession rights. However, an investigation conducted by the Teluk Langkap village head revealed that around 205 of the names listed by Koperasi Teriti Jaya as members do not own an inch of plantation in the koperasi’s proposed concession area. It is very probable that the koperasi took advantage of people’s low sensitivity over personal data, given that the majority of households in the village of Teriti and in my district in general are poorly educated. It is also a dirty little secret in my district that many village officials practice clientelism and political patronage with plantation and mining companies.

Koperasi Teriti Jaya’s endeavor to obtain a HTR concession supports the pulp and paper company’s ambitions to widen its operational area. My villagers’ plantations are located in the middle of hundreds of thousands of hectares of acacia forest owned by the company. It would not be surprising if the company hoped to use the koperasi as a proxy, rather than acting directly. This strategy would distance the company from the situation should land conflicts erupt, by presenting Syarif and my villagers’ defence of their plantations as a conflict with Koperasi Teriti Jaya, not with the company that allegedly bulldozed their plantations.

The tension between Koperasi Teriti Jaya and my village continues to simmer. Such conflicts have and will erupt in many areas in Indonesia if fictional forest koperasi are allowed to exist. It is imperative for Jokowi to evaluate the authenticity of all koperasi that have been granted concession rights . He must ensure that the koperasi really benefit the people residing near the forests, not just a few individuals who serve companies. Without such evaluations, land conflicts will intensify, and small-scale farmers like my parents and my villagers will be pushed deeper into poverty. 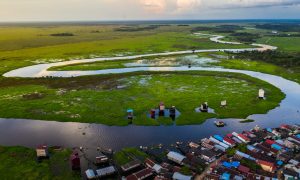 De-industrialisation and returning to the land in Indonesia

Returning workers from failed industrial hubs such as Batam live on the edge between two different worlds: town and village.