There are plenty of reasons to view this year’s presidential elections in Indonesia as less polarising than the last. Back in 2014, Indonesians were choosing between what appeared to be two very different candidates: Prabowo Subianto was the authoritarian populist with a formidable political machine and Islamist allies; Jokowi was the reformist democrat, who ran a hopeful campaign that emphasised communal pluralism. This year, there is far less separating the two rivals. The president’s coalition is much more Islamic, and Jokowi is not the democrat that many assumed him to be.

Yet, as Ross Tapsell has written at New Mandala, many Indonesians feel that politics is more polarised than ever. Tapsell largely blamed social media for “creating an artificial atmosphere of polarisation.” Indonesian commentators, and people I’ve spoken to in recent trips to Indonesia, feel the same way. Many similarly blame social media for mainstreaming the use of religious slurs and the demonisation of one candidate or the other.

The online discourse is indeed toxic. But I think that rather than being generative of an atmosphere of polarisation in its own right, social media is reflecting the terms on which this election really is being fought. Things are more polarised on the ground. If the election feels more tense for many Indonesians, it’s because each side has raised the stakes and framed their political enemy as an existential threat. The result is a much more divisive election, both online and in the communities where people live and work.

The main ideological cleavage in this election remains the long-standing pluralist–Islamist one that also characterised 2014. Each side’s electoral base hasn’t changed much at all: Prabowo’s most militant supporters come, as they did in 2014, from Indonesia’s religiously conservative provinces, like South Sumatra, West Java, and West Nusa Tenggara. Jokowi has made limited electoral inroads into these communities. So, while the cleavage remains the same, and the candidates themselves are not so distinct, the heightened sense of polarisation in 2019 comes from how Islamic groups associated with this cleavage have crystallised into more cohesive blocs behind their chosen candidate, and that these groups now play a more prominent role in their candidate’s campaign.

Islamist rhetoric and hard-line figures have an even more central role in Prabowo’s campaign than in 2014. Front Pembela Islam (FPI), once tasked with grass-roots intimidation and smear campaigns, now has its members in formal positions in Prabowo’s team; FPI’s leader, Rizieq Shihab, addressed the audience via video at Prabowo’s major campaign rally in Jakarta last week. Justdays ago Prabowo met publicly with Ustad Abdul Somad, a popular Islamist preacher. The sectarian message from Prabowo’s Islamist allies is the same as it was in 2014: Jokowi and his party, PDI-P, are anti-Islam and crypto-Communist—but now it’s being delivered by hardliners who are no longer on the fringes.

Jokowi’s coalition, despite its more overtly Islamic character, still represents Indonesia’s moderate Muslim constituency and its minority communities. He is backed by a mix of nationalist parties and the Nahdlatul Ulama (NU)-linked PKB. One critical difference with 2014, however, is that a far more unified and combative NU has taken centre stage in the Jokowi campaign. Back in 2014, NU was split: Said Aqil Siradj, the organisation’s chairman, openly backed Prabowo, while PKB and other factions within NU backed Jokowi. This time, with Ma’ruf Amin’s appointment as Jokowi’s running mate, NU and PKB have formed a solid bloc behind the president. Across the country, NU’s sprawling network of pesantren are being mobilised to get out the vote for Jokowi.

And their message is not a conciliatory one; rather, it’s message of “us or them”. NU and PKB leadership now propagate a kind of militant pluralism, which paints any Islamist group affiliated with Prabowo as a threat to the nation. NU’s leaders, from the national level down to local ulama on Java, Maduraand, in West Nusa Tenggara, the NU and Nahdatul Wathan-affiliated Tuan Guru, have been enlisted to convince the electorate not just that Jokowi will support these traditionalist Islamic institutions and their community of santri, but also that a Prabowo victory would open the door to an Islamic caliphate, and the rise of an emboldened Hizbut Tahrir Indonesia (HTI).

In recent visits to Indonesia, I have heard countless stories from friends in different parts of the country which paint their communities as more divided than in 2014.Staff at one workplace are forbidden from campaigning for Prabowo; in another case, their child was teased at school because everyone knows their parents are pro-Jokowi. In Lombok, members of Nadhlatul Wathan, a local Islamic organisation that has formally declared support for Jokowi, were told they must cancel their membership if they wish to vote for Prabowo. In the last few weeks, NU’s somewhat paranoid narrative about the dangers of a Prabowo-HTI alliance has started emerging from other parts of Indonesian society, including its academic community and the business elite.

This and the Jokowi government’s uncompromising approach to its enemies has deepened the divisions between the two camps. Each day more stories emerge about the politicisation of state institutions, from state-owned companies, to the police force, to local bureaucrats and village heads, all being compelled to rally support for Jokowi. Opposition figures and parties have been targeted by the state as well. The Institute for the Policy Analysis of Conflict (IPAC)’s research has documented how, among the Islamist groups associated with the opposition, there is a growing sense that these elections are a zero-sum game, at the conclusion of which the losers may suffer the same fate as HTI, which was banned by Jokowi using a highly illiberal legal instrument created for the purpose. How deep do these divisions run?

But how deep and consequential is this cleavage outside of election season? Political scientists whose work I draw upon define severe polarisation as a situation in which “cross-cutting intergroup differences” collapse into one identity-based cleavage, which is then channelled into the party system, defines a range of political preferences, penetrates community organisations, and “reduces normal political and social relations into two unyielding hostile factions.” Measured against this kind of definition, there are many reasons to be sceptical about the depth of polarisation in Indonesia.

At the political party and elite level, polarisation is relatively weak in between elections. For example, there’s every chance Prabowo will lose, and then make moves to join Jokowi’s government. Indonesia’s parties generally behave like members of a cartel; political leaders seek compromise and accommodation in order to try and access the state and its patronage resources.

Overall the party system remains largely scattered, rather than polarised, in terms of its ideological landscape. Other than PDI-P and PKS, most parties arguably fit a catch-all model and are hard to differentiate ideologically, and politicians at all levels generally try to seek support from a wide spectrum of voters, rather than from narrow, ideologically-defined or identity-based constituencies.

Based on what we know about the Indonesian electorate from ongoing survey research, most voters do not fall into ideological binaries, like militant pluralist versus hard-line Islamist. Instead they sit somewhere in the middle, and their preferences remain difficult to categorise or to associate with a particular political party or even a coherent worldview. Unlike in places like Turkey, America, or Thailand, in Indonesia it can often be difficult to even identity precisely who is on what side of the pluralist–Islamist cleavage based on their views on a variety of social and political issues.

At this stage, it’s fair to say that polarisation remains relatively shallow and contingent in Indonesia, reaching a crescendo only in moments of intense electoral conflict. Once this year’s election has been decided, divisions will mellow and moderate. Research on the United States suggests that electorates are only as divided as the choice they are given, which means that we should not discern deep ideological polarisation within the masses by looking at behaviour around election time.

But polarisation is not only a state, it’s a process. And these moments of electoral polarisation are important: with each major election since 2014, Indonesia’s political elite and religious organisations have used increasingly divisive political narratives to defeat their rivals. When Jokowi and Prabowo are no longer on the front line, divisions may mellow—but they will not disappear. As long as there are just two presidential candidates competing for office, it’s reasonable to assume that candidates will again try to mobilise around the religious cleavage I have described here.The question for Indonesia’s future is whether such campaigns create a vicious circle, hardening divisions between different political communities on the basis of (mostly religious) ideology.

I wish to thank Zusiana Elly Triantini, PhD Candidate at Universitas Gadjah Mada and Lecturer at UIN Sunan Kalijaga Yogyakarta, for her insight into these issues and for showing me around Lombok in the lead up to the 2019 elections.

This piece is based on an ongoing comparative study of polarisation funded by the Carnegie Endowment for International Peace.

More on the Indonesian Elections 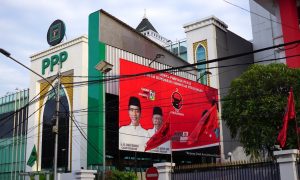 Indonesia: how the polls are performing

There’s little reason not to expect a comfortable win for Jokowi, but difficulties in predicting legislative election results remain. 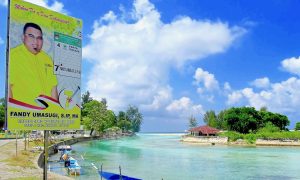 Indonesia’s elections in the periphery: a view from Maluku 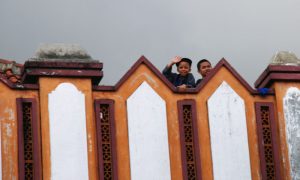