The saga of the MD3 law has not only uncovered an attempt by DPR members to shield themselves from public accountability, but has laid bare the dysfunctionality of governance under Jokowi.

President Joko Widodo (Jokowi) was recently reported in the media as stating that he would refuse to sign the controversial legislation on Indonesia’s legislative institutions (known as the MD3 law) that has been passed by the national parliament (DPR). After initially prevaricating on whether he would sign, Jokowi seems to have caved in because of rising condemnation about certain provisions of the legislation, particularly clauses that opponents of the law have argued would give DPR members immunity from public criticism.

Leaving aside the issue of whether the critics were correct or not, this incident reveals what a shambles the lawmaking process in Indonesia has become. The idea that Jokowi would use his presidential authority to refuse to sign legislation passed by the DPR is simply absurd, because the text of the law was already agreed to and supported by his own government during its passage through the parliament. It could not have reached the stage of presidential signature unless final agreement between the government and the DPR about the intent and wording of the legislation had been reached.

Many critics of the MD3 law argued that it was another example of overreach by the DPR. What the critics seem to be unaware of, however, is that the lawmaking powers of the Indonesian parliament are actually quite circumscribed. The DPR does not have the power to make laws by itself: Article 20 of the Indonesian constitution states that draft legislation can become law only when there is “joint agreement between the DPR and the President”. This means that, unlike for other democratic parliaments across the world, deliberation and debate on draft laws is not the sole prerogative of the DPR. The lawmaking process takes the form of a dialogue between representatives of the president (usually the relevant minister) and the DPR committee with policy responsibility in the area (in this case the Badan Legislasi or Legislation Committee).

As a result, the president (either directly or through his/her minister) can oppose any or all clauses of a draft law, put forward their own alternative clauses, bring legislative proceedings to a halt, or stall debate—often by the simple expedient of failing to nominate a government representative, or by not turning up to a committee meeting. In the latter cases, which have occurred quite often, the lawmaking process is effectively frozen by the president.

So for Jokowi to suggest that he somehow did not know about the content of the MD3 until it landed on his desk for signature defies credibility. This is, however, precisely what the President claims: that it was “not possible” for the Minister for Justice and Human Rights, Yasonna Laoly, to report to him about the deliberations because they were “very dynamic and very fast”.

Yasonna Laoly and/or his senior officials would have attended every official session of the DPR committee responsible for the legislation, and were doing so as constitutionally-mandated representatives of the president. If the minister failed to report to the president, it was a massive dereliction of duty on this part and he acted without the explicit authority of the president during the deliberations, in violation of the Constitution.

If, as Jokowi claims, all the prominent media coverage on the issue passed him by and he failed to question his ministerial representative in the DPR, it was also a huge blunder. The latter scenario would also throw the competency of Jokowi’s personal advisers into doubt, to say the least, since their first responsibility is to keep the president informed of all major political developments and protect him from possible embarrassment.

Whatever the truth of the matter, the process has been revealed to be a shambles. The reality is probably that there was poor quality communication amongst all parties concerned. Yasonna Laoly seems to have failed to consider the political ramifications of the legislation and to convey the gravity of the situation to Jokowi, possibly because he was acting under the influence of his senior ministerial officials. Jokowi’s advisers were deficient in the execution of their duty to warn the president, and Jokowi himself failed in his role as the ultimate voice of authority over all government representatives. And his belated action of refusing to sign the document is entirely tokenistic, because the President’s signature is not necessary to validate any legislation: it becomes law thirty days after being sent to the president, regardless of whether he signs or not.

The most important point to note is that, in this case at least, the shambles exists primarily in the halls of executive government. Conventional wisdom about failures in the lawmaking process is that it is always the fault of the DPR. In fact, however, the constitution endows at least half the lawmaking power on the president under the requirement for “joint agreement” between the DPR and the president. The DPR is frequently—and rightly—decried for its slowness and poor output of legislation. But in many cases the problems result from failures of executive government agencies, with poor coordination between ministries and half-baked and ill-considered policy reflected in badly drafted legislation submitted to the DPR—which often contradicts or overlaps with existing laws.

Further layers were added to the shambles when both Jokowi and Yasonna Laoly encouraged people to file a judicial review case about the law with the Constitutional Court—thus creating the bizarre scenario where a government is calling upon complainants to appeal against their own law. And from the NGO community came a report that a representative of the Constitution and Democracy Initiative (Kode Inisiatif) had proposed that Jokowi should issue a Regulation in Lieu of Law (Perppu) to annul the offending clauses in the law.

If this report is true, it suggests that an organisation advocating constitutional legality supports the misuse of a legal mechanism designed to be employed only in cases of emergency. It also does not appear to understand that a law passed by the DPR is, by constitutional mandate, a law that was agreed to by government. As such, the government should not be encouraged to annul its own law by emergency decree because the law has been found to be politically embarrassing.

The saga of the MD3 law has not only uncovered an attempt by DPR members to shield themselves from public accountability, but has laid bare the dysfunctionality of governance under Jokowi, as well as the apparent misunderstanding of basic constitutional provisions in both government and non-government circles. 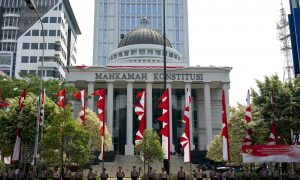 Data suggest public opinion and civil society do influence judges. That's both good and bad for the quality of their decisions.