In this second part I will explain how Suvarnabhumi politicises history and archaeology. Suvarnabhumi draws its support within national history by representing religious identity as static. Claims to Suvarnabhumi is somewhat like a sports competition among national historians in Thailand, Myanmar, Cambodia and other countries across Southeast Asia. 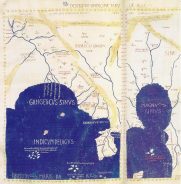 Claims of affiliation with Suvarnabhumi mostly correlates with Buddhist and/or Hindu modern communities. Endless research has gone into labelling where and what exactly is Suvarnabhumi. There is value to oral history and local narratives, and as a field researcher, I am always fascinated by the stories of how a particular village or shrine is related to Suvarnabhumi in the Jataka and Asoka eras. On the one hand, it empowers the local community to develop a local and oral history that supports decentralising the regional discourse. On the hand, it obstructs any further investigations into the more dynamic social identity of the region-spirit worship and how different religious traditions amalgamated into their modern forms. Religious identity is more complicated than the Hindu/Buddhist tradition reflected in historical narratives, which have also shaped analysis of material culture. Therefore, the price we pay for our focus on Suvarnabhumi is missing the complexity of religion and culture beyond simplified narratives of religious history.

The key issue is the misuse of contemporary religious categories. We have forgotten the fluidity of interactive spaces and the common lives of those living and producing in a space between the realms of the idea and cultural material. Regardless of its historical accuracy, Suvarnabhumi has been adopted into national history-building for most nations that are predominantly Buddhist. It has even become a historical ‘period’ of its own. Thai history makes reference to the Suvarnabhumi age, or “proto-history”, which marks the beginning of interaction with Buddhism and with India. A time when the golden riches of Thailand attracted traders from Rome, India, and China, launching a glorious age of trade and growth that was subsequently followed by Indianisation. Figure 1 Depiction of Sona and Uttara in Myanmar. The central pagoda depicts the boat that carried them to Suvarnabhumi.

Suvarnabhumi is important because it represents a deeper sacred identity among modern Buddhists in Southeasts Asia. Despite the absence of any mention of Suvarnabhumi in the edicts of the Indian emperor Ashoka (4th century BCE), Southeast Asian Buddhists believe that the Buddha’s missionaries (Sona and Uttara along with their entourage) arrived in Southeast Asia during the time to Ashoka. Suvarnabhumi creates a sacred landscape for the modern Buddhist nations. As a result of the contesting claims over Suvarnabhumi, historians and archaeologists have come under scrutiny for both politicising and commercialising popular religion. Pseudo-history are attempts to distort or misrepresent historical records. Some of these works are easy to recognise, while others disguise themselves in non-peer-reviewed academic work. Suvarnabhumi as pseudo-history is popularised among amulet retailers and right wing Buddhists in Thailand. From the 1970s to late 1980s, a local controversy emerged when a monk named Dhammadhatto at Sommanas Ravavaravihara Temple proclaimed that he discovered thousands of inscription tablets.

Dhammadhatto declared that these tablets predate the dates ascribed to rise of states in Southeast Asian chronology, and that the inscriptions prove Thai writing systems existed in the first millennium CE. The tablets link Thailand to Suvarnabhumi and claimed that the ancient city of Kubua in Ratchaburi province, which is accepted by scholars as belonging to the Dvaravati culture (fifth to tenth century CE), was actually the royal city of Suvarnabhumi. Dhammadhatto gained the support of some local academics, including the Cambridge educated M.C. Chanchirayuwat Ratchani, a famous Thai historian who publishes both in English and Thai. Chanchirayuwat Ratchani would subsequently publish materials from Dhammadhatto collections as part of his study in Thai Imageries of Suwanbhumi (1987).

Proponents of these sources established that there are colonial conspiracies to downplay the significance of Thai people and history, and that western educated elites were part of this scheme in order to smuggle and sell Thai artefacts. Many non-peer-reviewed popular history books were subsequently published and released to the public. It had a simple nationalistic and decolonial attitude that the Thai and Buddhist public would find intriguing. These are some of the claims put forward by this pseudo-history:

The book’s contents play out like a bad Indiana Jones extended episode, without the aliens or evil cults. Desperate to establish some authority over national history, the government declared the  entire room of objects as forgeries without investigation into who, what, and why someone would finance such materials. The perfect declaration to keep conspiracy theories happy and thriving. Currently the objects have been divided into two portions, with a room stored at Sommanat Varamahavihara and another stored at Plibplee Temple in Petchaburi. Despite the government’s declaration, Dhammadhatto’s version of Suvarnabhumi continues to be popular among a subset group of the Buddhist right wing in Thailand. The narratives that links antiquities to Suvarnabhumi have also been adopted by antique dealers to bolster the supernatural powress and sacredness of antiquities. Prices for both real and forged antiques go up when its sacred.

Dhammadhatto’s book also gave birth to claims by amateur historians that the Buddha is belongs to the Tai ethnic race. Ratchaburi province have adopted the story as a lore to promote Kubua city as Suvarnabhumi, with festivities and performances held to celebrate the story of kings and princes described in Dhammadhatto’s book. While academics in archaeology and history can laugh at these pseudo-historical publications and media outlets, the social phenomenon should not be entirely trivialised. It reflects a deeper social disconnection between academics and the general public, as well as distrust towards the literati. The contents of Dhammadhatto’s Suvarnabhumi appeals to the public because it offers a decolonised, albeit pseudo-historical, view of local identity and their status as Buddhists. His book borrows content from local folklores, stories, chronicles, and whatever academic publications in Thai accessible to the general public. Dhammadhatto possess a good knowledge of various historical sources, but this only serves to bolster the position of his books and publication that follows his theories for the untrained audience. During the height of the debate, some key sites in Ratchaburi were vandalised to create evidence for the theory. To date, many amateur and pseudo-historians still seek to support the theory that somehow Southeast Asia was a “golden land” of wealth and glory. For policy makers, reverie of a glorious past is as necessary.

Dhammadhatto’s book appeals to the public because it integrates actual historical sources with elements of religion and folklore:

Thai people, as we know, have existed since the time of Kassapa Buddha. We had a city named, ‘Muang Phaen’ and call ourselves, “Lawa-Thai”. [Note: This ties Thai identity to the Austro-Asiatic population who were early migrants into Southeast Asia] The ruler name was “Khun Paen Muang Fah” and “Nang Duang Kwan Kai”, they worshiped Mae Phosop [Rice Goddess] and celebrates the Royal Ploughing Ceremony. About 8,000 years ago, we changed the name of the city to “Muang Man” and “Maung Paen”. It wasn’t until the reign of Khun Sue Thai Fah and Nang Thai Ngam (6,800 years ago) that the first Thai alphabet was invented from the textile patterns designed by Nang Thai Ngam. Their eldest son Khun Laek Thai invented Thai numbers, while the second son, Khun Khom Thi Fah invented the Khom Alphabet [Ancient Khmer Alphabets] and the law.

Debates over Dhammadhatto’s objects emerged during the eve of Thai nationalism in the 1980s and 1990s, when students started protesting over looted Thai artefacts in foreign museums. A greater part of the book spent time attacking George Coedès as a colonialist who looked down on Thais, and portrayed him in a similar manner to the Thai academics who are considered members of a corrupt elite who trade in artefacts stolen from local sites.

This sense of distrust permeates to the modern discourse, in which locals do not necessarily see archaeologists as beneficial for the local community. Appealing to the sanctity of local folklore and stories such as Suvarnabhumi, gives local communities prowess over intellectual pursuits which are neither accessible nor empowering towards the communities. Folklore and stories cannot be taken from the site, and connects community identity to history. Thus, Suvarnabhumi is both locally and nationally empowering for regional identity politics. Whether presented as pseudo-history or history, it has become a literary device to empower local identity, all the while, illicit trades and grey markets of looted and forged items continues to prosper.

Different communities with archaeological heritage construct their own narrative as Suvarnabhumi to connect with Buddhism and Ashoka. Identity drawn from a deeper past, allows modern inhabitants to establish a sense of communal pride and define their inhibiting space as sacred. For many communities in Southeast Asia, connections history interplays with political power and significance. We only need to look at the amount of sites affiliated to historical kings like Naresuan and Taksin in Thailand, and how the ceremonial aspects of these sites draw both power and sanctity to these locations. These places would have otherwise been disregarded without legends that create national significance.In Myanmar, temples in Mon state still venerate sculptures of Sona and Uttara. Their tale give significance to both Mon identity and landscape. 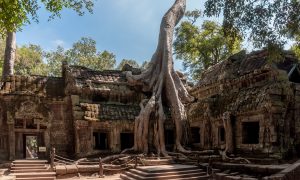 Can our cities survive climate catastrophe? Ancient Asia may hold the key

The fall of great premodern Southeast Asian settlements offers hints about what climate change has in store for today's megacities.