Regime change at GE14 did not change the dominance of Malay politics.

Analysts of Malaysia’s 14th general election (GE14) agree that the ruling Barisan Nasional (BN) suffered a humiliating defeat. But there is less unanimity that this also applied to the dominant party in BN, the United Malays National Organisation (UMNO).

BN’s loss is clear to all. On election night BN won only 79 seats, down from 133 in 2013. Soon afterwards, several coalition members and UMNO representatives declared independence. BN was left with the pre-BN Alliance three of UMNO, MCA and MIC, and by September had only 51 members in the 222-seat parliament (two contributed by MIC and one MCA). BN’s share of the popular vote before desertions declined from 47.4% to 33.7%.

Nonetheless many UMNO leaders, and political analysts, argue that this was not a rejection of UMNO. The party’s information head, Annuar Musa, declared UMNO had obtained 60% of the Malay-Muslim vote. Former Prime Minister Najib Razak said there was no Malay tsunami against UMNO in GE14, only a divided Malay electorate. Current UMNO head and former Deputy Prime Minister, Zahid Hamidi, claimed that UMNO still had strong Malay support of 46%, and “it is higher than the previous elections.”

Similar views have been expressed by academic commentators. One analyst claims that UMNO enjoyed the support of 46.29% of the Malay electorate, compared to 28.14% for PAS (Parti Islam), and 25.47% the ruling Pakatan Harapan (PH, Alliance of Hope) coalition comprising PKR (People’s Justice Party), Democratic Action Party (DAP), Parti Bersatu (PPBM, or United Indigenous Party), and Amanah (National Trust Party), together with its Sabah ally Warisan (Heritage). A widely quoted survey by the respected Merdeka Centre put Malay support for the PH and Warisan at only 25-30%, while PAS received 30-33% and UMNO 35-40%.

While there are difficulties getting a precise measurement before detailed examination of individual constituencies, it is clear that UMNO’s influence in the Malay community is not as high as these figures suggest.

UMNO was able to gain some support in rural areas – voting data in the Perak constituency of Sungai Siput showed that UMNO won 52% of the rural Malay vote, a result likely replicated in some similar constituencies. But UMNO seats declined from 88 to 54 (48 after resignations in June, July and September), its worst result ever. Its total vote in an expanded electorate declined from 3,416,310 of 11,257,147 votes (30.4% of popular vote) in 2013 to 2,552,391 of 12,299,514 in GE14 (20.8%). In earlier elections, UMNO lost only 6-7 of 54 rural constituencies with FELDA development schemes, while in 2018 it lost 19. There is even evidence that Malay bureaucrats, the police and the army abandoned UMNO in significant numbers. And these opposition gains came after a pre-election redelineation designed to benefit UMNO and BN. It also continued to benefit from a strong weighting in favour of smaller predominantly Malay electorates – in 2013 BN required 39,381 votes per MP to Pakatan’s 63,191 votes, while in 2018 the ratio was 46,836 to 77,943.

Nor should the vote for PAS be considered anything but a rejection of UMNO, notwithstanding an understanding between UMNO and PAS leaders to divide the Malay vote to their mutual benefit. With widespread speculation that UMNO was about to win the state of Kelantan, PAS voters united against the traditional enemy, UMNO, as they had many times in the past. PAS support remained concentrated in its traditional heartland, and the small increase in its popular vote from 14.7 to 16.9% was not exceptional given that it contested more than double the number of seats it had in 2013, 157 seats as against 73 for Malaysia as a whole, and on the peninsula, 143 compared to 65.

How then was Malay support divided in this election? It must first be noted that virtually all comments on this refer only to the peninsula, as the Malay electorate is a minority in Sabah and Sarawak and does not necessarily represent the same interests as those on the peninsula. By my calculations, Malay support for UMNO on the peninsula was about 5% higher than support for PAS and PH. This is indicated in the table below:

True, the UMNO vote cannot simply be equated with Malay support for UMNO. Some of the UMNO votes would have been contributed by non-Malays, while Malay UMNO supporters in other constituencies would have expressed their support for UMNO by voting for other BN candidates. Not many non-Malays would have supported UMNO candidates – most estimates are that over 93% of non-Malays voted against the BN. But nor are many Malays likely to have supported non-UMNO BN candidates, as the massive defeats suffered by these candidates indicates. It should, however be noted that UMNO contested in nearly twice as many seats as other BN (106-59). I therefore assume that non-Malays supporting UMNO and Malays supporting non-UMNO BN candidates would approximately cancel each other out, and that the percentage vote for UMNO would remain around 36.6%.

That leaves another 31.7% of the Malay vote unaccounted for, and this could only have been directed to PH.

Even these figures may flatter UMNO. On election night, the EC declared the voter turnout to be 76%, but revised this by more than 6% to 82.32% two days later. No explanation for this extraordinary difference was given, but the EC’s past record suggests that figures may have been adjusted to strengthen the UMNO/BN vote. 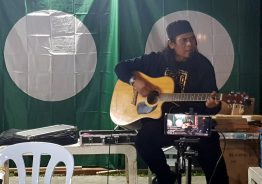 One analyst has expressed concern that the Malaysian government is now dominated by non-Muslims, since for the first time non-Muslims outnumbered Muslims in the ruling coalition (PH and Warisan). The government has 66 non-Muslim MPs. It has only 58 Muslims – 27 from PKR, 13 Bersatu, 11 Amanah, 6 Warisan, and one DAP – comprising 46.8% of the total.

This is indeed the case. Although somewhat similar to the 1999 election, when for the first time UMNO won fewer seats than its coalition partners (72 of 148, or 48.6%), 11 Parti Pesaka Bumiputera Bersatu representatives in Sarawak lifted the BN Muslim component to 83, or 56.1%.

But the small non-Muslim majority of government MPs has not meant that this group dominates the government. The Cabinet is overwhelmingly Malay-Muslims, as 18 of its 26 members are Malays (69%), including the key posts of Prime Minister and Deputy Prime Minister.

And the Parliament remains a predominantly Malay-Muslim institution. The PH and UMNO Malays elected for the peninsula on 9 May totalled 97. To this must be added a further 10 Malays elected for BN in Sarawak, and 15 in Sabah (8 UMNO, 6 Warisan and one from PRK). In total 122 members (55%) of the House of Representatives are Malays. 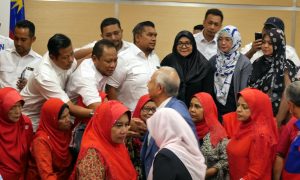 The ‘cari makan’ or a rent-seeking political culture may be the hardest thing to reform in Malaysia, even under a reformist government. And human nature will make this almost impossible to do.