All the news that’s fit to fake

As Malaysia rushes to its 9 May polling day, the new anti-fake news law may be wielded against the state's critics, emboldening speech vigilantism by outsourced censors.

The Malaysian Parliament passed the Anti-Fake News Law a week ago on 2 April 2018, just in time for the 14th general elections (GE14) on 9 May. It wasn’t the most controversial law to have gone through the Barisan Nasional (BN)-dominated legislature, as the National Security Council Act passed in 2016 gives wide powers to the government to declare a state of emergency. But surely the Anti-Fake News Law is one of the many designed with clear targets in mind—dissenters and critics, and just about anyone who dares to verbalise any thoughts or opinions that challenge the establishment.

The law has yet to be gazetted, which is needed for it to be enforced. But its introduction is enough to raise fears among journalists, bloggers, politicians and netizens who speak out on social media. A maximum six-year jail term replaced the 10 years initially penned in, while the term “knowingly” in creating and spreading false news now reads “maliciously”. The change was presented as a compromise from the government following strong criticism, but it did little to placate concerns that the law is essentially problematic as it violates fundamental principles of freedom of expression. Besides, one cannot help but wonder if the “compromise” was a deliberate strategy to demonstrate a responsive government that should be voted back in.

The road to this haphazard but possibly shrewdly crafted law has been paved with a series of cosmetic reforms under Prime Minister Najib Abdul Razak since he took office in 2009. While some laws like the Internal Security Act (ISA) were repealed, others introduced still contain draconian provisions. This latest law promises to fill in the gaps of what the Communications and Multimedia Act (CMA) couldn’t do in reining in free speech online. Since the 2008 general elections (GE12), the CMA has been a useful tool for the state to use in clamping down online critics.

In most cases, those hauled up for investigations were individuals sharing their thoughts and opinions over Twitter, Facebook and even WhatsApp. Activists and artists have also been charged under the law for satire and criticisms levelled against the government. It was a reminder to ordinary citizens that they had to toe the line, and what better way of instilling fear than to arrest and threaten them with jail sentences. According to human rights organisation SUARAM, there were 146 known documented cases under the CMA in 2017 alone. It observed that it was much easier to prosecute for speech under the law. However, most who were charged under the law would plead guilty, and only a few mounted constitutional challenges.

In 2017, plans were afoot to amend the CMA as the authorities sought more powers to investigate and prosecute online offenders and increase the penalties. The changes were not tabled but it can be assumed that the initial idea behind that proposal had found its way into the Anti-Fake News Law.

For most observers, the obvious reason behind this rushed law is to keep the scandalous 1Malaysia Development Berhad (1MDB) wealth fund and other financial misappropriations out of the electorate’s focus. This is a punitive law that fails to provide any clarity on the meaning or parameters of “fake news”, but criminalises a wide array of speech online and offline. It is thus obvious that “fake news”, as defined by the Najib government, is a catch-all phrase to allow politicians to delegitimise any forms of criticism; businesses to slam dunk their complainants using state resources; and turn members of society against each other on potentially frivolous allegations of spreading allegedly false content.

The latter is the most worrying as the state has outsourced censorship to a range of private individuals and groups to act on its behalf, to defend, among others, narrow interpretations of Islam and Malay rights. The state is then presented as having a hands-off approach even though it gives tacit approval for many of these acts of political and social vigilantism. Which is why, even if Najib’s UMNO-led coalition wins a two-thirds majority in Parliament at GE14, Malaysians can expect the law to be applied actively after the elections.

That the law does not specify the context in which “fake news” can occur—for example, during elections, as proposed in France—means that its application will be wide, arbitrary, and disproportionate to the alleged offences. Citing the other jurisdictions in Europe as justification is irrelevant as Malaysia’s law was passed amidst an already restricted environment for free speech and the media. Besides, it’s not falsehoods that the government is worried about, or that it could harm ordinary citizens; it is the expose of abuse of power that it fears. Malaysian leaders are much like the authoritarian leaders across Asia who have found US President Donald J. Trump’s language of “fake news”—an accusation he directs to the media he doesn’t like—useful to justify their controls at home.

Independent media outlets and journalists in Malaysia, as well as social media users, can expect to be on the target list. They are already cornered at almost every turn with the CMA, the Sedition Act, the Official Secrets Act, the Printing Presses and Publications Act, and the Defamation Act, just to name a few. Scenarios in which the media could be affected by the law include publishing developing stories (corruption, crisis, emergencies, political events) that rely on sources or witness accounts, and reportage based on information and data collected by think-tanks, academics or non-governmental organisations.

The mainstream, pro-government media, on the other hand, may be exempt from this as they continue to function as mouthpieces of the ruling party and have a stake in legal obstacles for smaller and less-resourced competitors. Since the 2008 elections, online platforms and social media in particular, have overtaken the mainstream licensed media as the primary sources of information. Many of the legacy media companies have acknowledged challenges posed by digital technologies on their business models, and have experienced serious financial losses and falling circulation over the years.

Of course, the media landscape is not defined in binaries, the good vs the bad, independent and otherwise. But to a large extent, the mainstream media has propped the government and has done little to remedy the loss of credibility it has suffered in the process. Even the BN set up its own news platform, The Rakyat, for the elections and its leaders have increased their presence on social media significantly since the 2008 defeat online, in order to reach out to younger Malaysians. It might just be that the BN has lost confidence in the mainstream media, which it controls, to deliver the votes it needs. 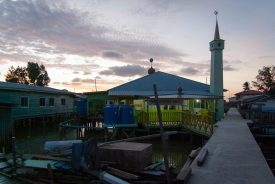 Even if the Anti-Fake News Law has yet to be operationalised, it is certain that “fake news” will be a feature of the elections. Leaders from all sides of the political divide are sure to frame their narratives in this language. Citizens and voters will have to navigate through the vast and complex web of information sources to find what is useful for them. And now that “fake news” has become a clear and present danger to society, BN’s online machinery and its cybertroopers will tap into that goldmine of public “confusion” to discredit its opponents.

Instead of legislating against so-called fake news, it would have been far better to promote public discussions about politics and governance, and encourage digital media literacy at various levels. With GE14, it is important that voters take the time to be more discerning of the information they receive. As most people are expected to share news and updates on social media including chat applications, it will be challenging to verify the sources of authenticity of the information. This can be a tall order as most people are likely to trust messages from friends or family members, especially if these affirm one’s pre-existing political positions.

This GE14 will not only be a social media “war”, it will also witness how far Malaysia’s politics will be able to cope with new forms of propaganda and misinformation. 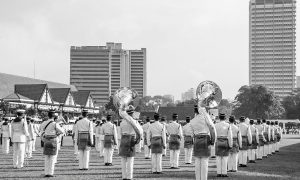 Closer scrutiny of Malaysian elections since the era of Najib Razak's father can sharpen the contrasts over winning—and losing—legitimacy.