Prabowo on his horse at Hambalang, 11 April 2018 (Photo: @habiburokhman on Twitter)

Yesterday (11 April), Prabowo Subianto hosted a Rakornas (National Coordination Meeting) of his Gerindra party at his mountaintop lair in Hambalang, West Java. At this event he announced during a speech that:

This has subsequently been reported by some international media outlets as confirmation that Prabowo will run for president; some reporting appears to treat a Prabowo candidacy as a foregone conclusion.

I think that’s premature. I’d argue that the Hambalang speech reemphasised what’s become pretty clear over the past few months: Prabowo is genuinely ambivalent about running for president again, and is hedging his bets in the lead up to the 10 August deadline for party coalitions to nominate presidential tickets.

The location of the Rakornas was one giveaway. Rather than investing in an expensive big-city venue that could be readily accessed by the media, Prabowo instead gave his speech in his own backyard. The only television footage that emerged was of poor quality; obviously no provision was made for TV crews to plug into the A/V.

Prabowo’s language was also odd. Announcing that you are “ready” to run for president “in the event” that your own party “tasked” you with doing so—and on the proviso that you can put together a party coalition—seems to me to leave the door wide open for other scenarios that remain on Prabowo’s mind. As some media reports have rightly acknowledged, the “declaration” has to be viewed in light of Prabowo’s recent meeting with Luhut Pandjaitan, who’s frequently served as a middleman between President Jokowi and Prabowo. I wasn’t at the meeting, obviously, but it’s nevertheless my understanding that Prabowo remains open to accepting an offer from Jokowi to be his running mate if the terms are attractive enough; it’s a matter of public record that Gerindra and Jokowi’s fixers have been sounding each other out about this possibility.

In short, this doesn’t strike me as the speech you make if you want to seriously announce a presidential run. It’s the speech you make when you’ve been pestered for months by hangers-on who need you to run in order for them to stay relevant. Gerindra, after all, is the quintessential personal vehicle party. As such, it loses its raison d’etre if it’s not supporting its figurehead’s ambitions for office.

Given the incentives that presents for Gerindra officials, it’s completely plausible that the likes of Fadli Zon and Ahmad Muzani would be happy to have Prabowo run and lose, as long as Gerindra can still benefit from a coat-tails effect in the 2019 election. (I have no doubt, meanwhile, that Prabowo doesn’t care much whether Gerindra outlasts him. That said, people once dismissed Partai Demokrat as an ephemeral “SBY fan club” that would collapse once SBY left the presidency, yet SBY seems determined to refashion PD into a dynastic vehicle for the benefit of his son Agus. The younger generation of Djojohadikusumos, though, would be a pretty weak basis for a Prabowo dynasty.)

So that’s why you’ve had Fadli Zon running around like Baghdad Bob declaring that Prabowo’s official declaration is right around the corner—just you wait and see, O ye of little faith. It’s why, immediately after the Rakornas, middling Gerindra officials were breathlessly assuring us that the declaration of a Gerindra–PKS–PAN coalition to nominate Prabowo is imminent. And it’s why the Hambalang event’s basic nature—a very public display of Gerindra rank and file imploring Prabowo to run—couldn’t be concealed.

Now, this isn’t to say that Prabowo won’t decide to jump in eventually. He’d be keeping a close eye on the polls to see any weakness in Jokowi’s electability, perhaps waiting to take advantage of the platform offered to him by the upcoming regional elections. If that’s the case, he can be encouraged by he fact that last time he put himself front and centre in a high profile regional election campaign, this happened:

The spike in Prabowo’s electability rating in early 2017 followed a period in which he was out on the hustings in support of Anies Baswedan’s Jakarta gubernatorial campaign. The implication is that when Prabowo captures sustained media coverage, he captures the attention and approval of voters waiting for a credible adversary to Jokowi to rally around.

So, what would we expect to see if Prabowo was determined to run again? I expect we’ll get a clearer idea of how keen he is as June’s pilkada approach. With the possible exception of Sudirman Said in Central Java, Gerindra’s regional candidates are a pretty uninspiring bunch; one has to wonder whether his and his party’s financial situation, rather than pre-2019 strategy, were at the front of Prabowo’s mind when he was handing out nominations late last year. But regardless of the quality of Gerindra’s candidates, pilkada season gives him an excuse to fly around Indonesia getting free media attention by speaking at events that his candidates pick up the bill for. The timing of the pilkada is perfect if Prabowo wants to goose up his polling numbers ahead of the dealmaking around presidential tickets that will reach its climax in July–August.

We got a taste of such tactics during Prabowo’s quick blitz through West Java in late March, where he reprised some of the nationalist themes that marked his 2014 campaign. A sustained run of such performances by Prabowo, and not just heavily qualified statements about his “readiness” to be nominated, would be a sign that a rerun of 2014 is on the cards. 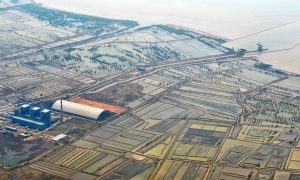 Jokowinomics vs reality: a look at PLN

SOEs are expected to do ever more for Jokowi's infrastructure push, but politics dictates they forgo revenue to offer subsidised goods. Who ends up with the bill? 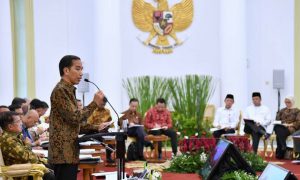 The MD3 saga lays bare not only the DPR's attempt to shield itself from public accountability, but the dysfunctionality of governance under Jokowi. 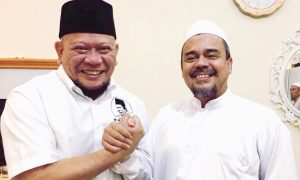 Details on a falling out between pro-Anies Baswedan political parties and the religious leaders behind the 212 movement.