In the aftermath of the 2018 Malaysian General Elections, a sense of renewed hope spread across the country; hope, above all, for an end to divisive identity politics. The perverse games of race and pseudo-religious solidarities that have been Malaysia’s old-faithful statecraft strategy to mobilise and synthesise national consciousness were widely expected to become issues of the past. A year and a half later, however, we must face a disenchanting reality: ethnoreligious nationalism is certainly not over in the ‘New’ Malaysia.

It has been over a year since Pakatan Harapan swept into power, but its dwindling momentum and unfulfilled promises have eroded civil society’s conviction in its governance. The largest opposition Malay-Muslim parties—the United Malays National Organisation (UMNO) and the Pan-Malaysian Islamic Party (PAS)—have effectively pulled the national conversation back to the age-old subjects of race and religion.

As Pakatan Harapan’s foothold in the Malay political landscape is being undercut with pressures from the nascent UMNO-PAS alliance, the government is forced to turn its efforts to a careful cultivation of the Malay electorate in order to sustain power in upcoming elections. This dynamic has been personified by the controversy surrounding Islamist Zakir Naik and the government’s capitulation on the issue. Zakir Naik represents the high cost of Pakatan Harapan’s desperate pursuit of Malay votes: affronts to much of its non-Malay base, and the resurgence of polarising sectarianism.

Since 2016, controversial televangelist Zakir Naik has been wanted by Indian authorities on charges of money laundering, and has been accused of the incitement of extremism through hate speech. He has called for the death penalty for apostates and LGBTQ+ people, the amputation of the hands of thieves, and has supported Osama Bin Laden’s acts of terrorism against America. At the same time, Naik is popular with segments of the Muslim community globally and in Malaysia.  He was granted Malaysian permanent residency (PR) by the previous government, under Najib’s administration.

On 8 August this year, Naik was invited by PAS to deliver a speech in Kelantan, where he reportedly labelled Malaysian Chinese as “old guests” who should return home. He also disputed the loyalty of Malaysian Indians towards the Malaysian PM Mahathir, alleging that they were more supportive of Indian PM Narendra Modi. This issue galvanised public anger, particularly among the Chinese and Indians, and dominated headlines for weeks. Multiple police reports were lodged against Naik to revoke PR status and deport him back to India, his native country.

PM Mahathir acknowledged that Naik had violated the terms of his PR when he touched on racial politics and stirred racial tension, but consequently stated that Naik would not be deported to India.  According to Mahathir, Naik had been given refuge in Malaysia as he might not receive a fair trial in India.

Naik received support from some members of Malaysia’s religious establishment; Penang Mufti Wan Salim Wan Mohd, for instance, issued a press statement entitled “Zakir was just presenting the truth”. Wan Salim endorsed Naik’s residence in Malaysia as the allegedly racist Indian government would be unjust to put him on trial.

Syed Saddiq, Malaysia’s Minister of Youth and Sports and Bersatu’s Youth Chief, who had initially called for Naik’s PR status to be retracted and supported his extradition to India, abruptly backtracked from his position. On 24 August, Saddiq posted on social media a photo of him hosting Naik at his home for dinner, stating that Naik has apologised and Malaysians should forgive and move on.

Naik was indeed subjected to police investigations, after which he apologised over the racial and religious upheaval he caused. However, he claimed that he was not a racist and that his remarks had been taken out of context and “used selectively with fabrications added to them”. Soon after, Naik filed a defamation suit against five political actors who were acutely critical of him. Importantly, the Malaysian police acted upon Naik’s report and summoned the five to record their statements. Photo courtesy of the Islamic Research Organisation of Pakistan via Vimeo

Following the meeting between Malaysian PM Mahathir Mohamad and Modi on 5 September in Russia, both governments issued contradictory statements on whether Naik’s extradition was discussed at the meeting. Mahathir stated that Modi did not make an extradition request. However, India’s External Affairs Minister, S. Jaishankar, claimed otherwise. The latter said that the extradition issue indeed came up during the meeting; India wants Naik back, and had made the request in January 2018. Mahathir recently said that Naik would possibly be killed if he were returned to India.

Comparisons of the Naik affair with Malaysia’s handling of the case of Turkish refugee Arif Komis, however, have led to criticisms of inconsistency. Komis and his family were asylum seekers living in Malaysia under the protection of the UNHCR. On 30 August 2019, they were hastily deported to Turkey by the Malaysian police. The Malaysian government proceeded with this despite warnings from advocacy groups such as the Stockholm Centre for Freedom (SCF) who documented violent torture and crimes against humanity committed upon those who were deported from Malaysia to Turkey. In the difference between the treatment of Komis and Naik, an uncomfortable truth becomes clear: in Mahathir’s Malaysia, political calculations clearly take precedence over the safety of asylum seekers.

Mahathir’s decision has also tested the cohesion of the ruling coalition. While members of his party Bersatu have called for forgiveness, Democratic Action Party (DAP) politicians have firmly expressed their concerns—both reflecting the sentiments of their respective constituencies. DAP Deputy Chairman Gobind Singh Deo and Vice-Chairman M. Kulasegaran told PM Mahathir that Naik must be booted out of the country. DAP Supremo Lim Kit Siang said that this “had been the concern of the six DAP ministers who had, under the leadership of the DAP Secretary-General and Finance Minister Lim Guan Eng, discussed and concurred on the issue.” In fact, four out of the five people who were sued by Naik were from the DAP.

PAS President Hadi Awang adroitly capitalised on this issue. He commented that the DAP members who wanted Naik deported had no respect for Naik’s “intellect” and that deporting him would reflect “stupidity and weakness”. Hadi said that the police should take due action against those who “started the issue and made it a political polemic” and advocated against the “mistreatment” of Naik, adding, “we will pray to Allah to listen to us”.

Pakatan Harapan, and particularly Bersatu, cannot afford to be accused of being anti-Islam. This comes on the back of accusations by the opposition that the government had betrayed Malay-Muslim interests in seeking to ratify the International Convention on the Elimination of All Forms of Racial Discrimination (ICERD) and the Rome Statute.

A ban was indeed placed on Naik from delivering speeches nationwide; however, a few weeks later, Naik was featured on posters advertising for a prayer event in Malacca entitled “A Night of Islamic Unity” alongside Rafiq Naizamohideen, who sits on the Bersatu supreme council. As the supreme council holds executive power over the party’s directives, this move tacitly projected the stance of the party’s leadership towards Naik. Malaysian Home Minister and Bersatu’s President, Muhyiddin Yassin, said that the government would not stop Naik from participating in religious events provided that he did not address the crowd.

This is significant because Islam plays a role in Malaysian politics that is far greater than just a religion. It operates as a multifaceted cleavage—socio-political, economic, and legal. Hence, including Naik in a high-profile religious event validated Bersatu’s reverence for Islam and its ‘missionaries’. It furthermore demonstrated how the virtue of forgiveness, which is profoundly emphasised in Islam, is embodied by the incumbent government.

In the 2018 General Elections, the ruling coalition did not have the majority support of the Malay-Muslim electorate which forms over 60% of the country’s population. A recent study by the Ilham Centre demonstrated that Pakatan Harapan’s acceptance by the Malays was “minimal and fragile”. The  Malay Mail reports, in fact, that the union between PAS and UMNO has been widely accepted as an alternative to Malay representation in the country’s politics.

In the run-up to the 14 September UMNO-PAS alliance, Pakatan Harapan leaders’ appeal for Zakir Naik to be forgiven made political sense. The rhetoric of the UMNO-PAS alliance revolves around accentuating themselves as true champions and guardians of Islam and emphasising the supreme position of Malay-Muslims. Any attempt to extradite Naik could thus be a potential brickbat against Malays and could be construed as anti-Islamic. To prevent the opposition from gaining the upper hand, the government is therefore left with little choice but to work to quash perceptions of Malay alienation. As such, the politics of forgiveness was strategic to reassure the Malay stratum—which was far from stable. Beneath the veil of forgiving Naik lies Mahathir’s interest in securing this principal vote bank: where the biggest battle for the next elections would be held. This is particularly so for Bersatu politicians looking towards the next Bersatu party elections in June 2020. A clamour for Islamic reform in Malaysia: but in which direction under a Divine Bureaucracy?

Can Malaysia's new government depend on its unelected Islamic bureaucracy?

While identity politics has been the mainstay of Malaysian politics, if a foreign fugitive is allowed to play in the field of ethnoreligious sectarianism with impunity, a line would have been crossed.  Yet, Pakatan Harapan has sought to strike a middle ground.  While the government has not deported Naik, it has put him under investigations and banned him from delivering speeches, effectively gagging him and reducing his profile.

Home Minister Muhyiddin has adopted a neutral tone and legal position, leaving the door open for further police action.  PM Mahathir has conceded that “Malaysia is not keen” for Naik to reside in the country, and “if any country wants to have him, they are welcome to do so”. It appears that if they manage to send Naik to a Muslim country (he is allegedly a citizen of Saudi Arabia), Pakatan Harapan could swiftly wash their hands of this issue.

Of course, this falls far short of expectations among Pakatan Harapan’s most enthusiastic supporters that it would unequivocally reject extremist views of the variety espoused by Naik. It also augments frustrations built upon the ICERD, Rome Statute and Khat controversies.

On a cursory glance, the moral arbitration of ‘forgiving’ Naik seemed like a zero-sum game: his exemption from prosecution meant reinforcing immunity for an ethnoreligious supremacy. For those minority voices who dissented, their confrontations would either fade into silence, or the notion of ‘forgiveness’ would have to be coercively shoved down their throats, concealed under the disguise of a greater commitment to peace. Yet, upon closer scrutiny, Pakatan Harapan’s calculated forgiveness was its modus operandi to cautiously defuse the controversy. ‘Forgiving’ Naik would woo the conservatives; banning him from delivering speeches would appease the liberals.

Importantly, Pakatan Harapan’s imperatives were of political and economic reform; however, the opposition has seemed to hijack the narrative by exploiting the currency of race and religion. This holds precarious implications for the government: its intra-coalition cohesion is wavering, a more dogmatic brand of ethnoreligious nationalism is brewing, civil society support and confidence is diminishing, and there have been discrediting inconsistencies in the international domain—with the backtracking of the ICERD, the Rome Statute, the deportation of Komis’ family, and bilateral contradictions on Naik’s extradition, to just name a few.

The government is aspiring to refocus public attention and regain the initiative with its upcoming major policy announcement, the Shared Prosperity Vision. Alleviating the anxieties of Malays and restructuring the economy for all would be an uphill task, but it is perhaps Pakatan Harapan’s best hope for reclaiming public acclamation. 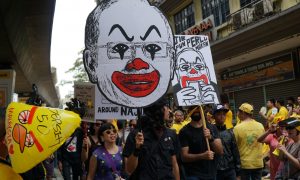 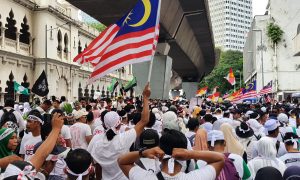 Himpunan 812 and a new rivalry in Malay politics

Observations on what many are calling Malaysia's answer to Indonesia's 212 movement.

Despite the routing of UMNO at GE14 amid regime change, Malay politicians still dominate the new coalition government.