“Rice for Fish”: Karen counter-narratives of self-sufficiency and Thainess

When COVID-19 hit Thailand, Phuket Island locked down, leaving the fishermen of Rawai village without a market for their goods. In response, the Indigenous Peoples’ Association, an association of indigenous ethnic minority groups based in Chiang Mai, started the “Rice for Fish” program in which Rawai fishermen from the indigenous Moken, Moklen, and Urak Lawoi communities traded dried fish for rice from Karen communities. Nearly 1,000 kilograms of rice and fish were traded—the fish providing sustenance for the Karen as they fought forest fires in Thailand’s north, the rice sustaining the Rawai fishermen amid the sharp drop in tourism.

‘Rice for Fish’ has come to a close as COVID-19 restrictions are being lifted in Thailand. But while the immediate project of providing sustenance may be over, the project’s deeper role in redefining indigenous identity in Thailand has just begun.

The term ‘Karen’ refers broadly to related languages, but the identities of Karen communities in Thailand are dynamic and cannot be reduced to a single linguistic, religious or cultural grouping. Historically, the Thai state has used Karen ‘backwardness’ as justification for taking over their ancestral forest land in Thailand’s north. The Karen have been understood as strange, filthy, and an uncivilised ‘Other’ in a classic urban/rural configuration.

“In Thailand, social studies teaches us to look at rural people as poor people, as inherently undeveloped,” said Suwichan “Chi” Pattanapraiwan, one of the co-founders of Rice for Fish and an Assistant Professor at Srinakharinwirot University. Chi himself is Karen and was part of the Indigenous Peoples’ Association’s founding in 2010. “People in rural areas, even if they are self-sufficient, are considered poor, stupid, a sickness in society that has to be ‘developed.’”

For Professor Suwichan, less encroachment from the Thai state is the only way to sustainably manage local resources. But for that to happen, more state officials need to believe that indigenous people are the rightful custodians of forest land. In establishing a Karen-driven counter-narrative, the ‘Rice for Fish’ program offers an alternative to state intervention, a vision of self-sufficiency based on more extensive decentralisation of state control over forest lands.

“Before ‘Rice for Fish’, the stories about indigenous people were about our powerlessness, our victimhood,” said Chi. “The project has changed our image into that of people who have capabilities to take care of ourselves and one another.”

Karen identity: between forest and the state

Over 400,000 Karen live in present-day Thailand, especially in the north and west of the country. But a colonial approach to governing the Karen persists, with a metropole-periphery dynamic enduring between the centre and outer regions. “Where is the state? The state is in Bangkok,” says Professor Chi. The ‘periphery’ faces pressure to increasingly come under state control, manifesting in the eviction and erasure of indigenous populations from their ancestral homelands.

In the 19th century, Karen leaders were appointed to high positions within the Thai socio-political hierarchy, even occupying the position of the feudal chief (chao muang) of Sangkhlaburi until the 1890 administrative reforms. But by the 19th century, amid the modernisation reforms of King Chulalongkorn and the notion of striving towards siwilai or civilisation, the Karen were recast as khon pa or ‘forest people’.

More importantly, their status as guardians of the forest came under question. As Siam tried to more clearly inscribe its borders in response to territorial pressure from European colonial powers, forest land became penetrated by the state’s presence. In recent years, the state has villainised the agricultural practices of the Karen as a pretext for dispossession. Government officials have attributed the area’s violent forest fires to the Karen’s slash-and-burn methods, with Deputy Prime Minister General Prawit Wongsuwon threatening earlier this year to “lock down the forests” to stop local agricultural burning.

Many Karen communities have already been ‘locked out’ of their forests in favour of state custodianship: the 1981 designation of the Kaeng Krachan area as a national park displaced 391 Karen people. Displacement has only worsened under the military government. When the junta came to power in 2014, it promised to ‘reclaim encroached land’ and introduce a new forest zoning system.

While the Karen evicted from Kaeng Krachan were promised alternative farmland, for many Karen, displacement from ancestral forest land is akin to erasing their identity. Many Karen engage in subsistence farming, with some branching out into small-scale commercial farming with the growth of direct-to-consumer internet sales. Using a combination of slash-and-burn and irrigated rice farming, land is used to grow produce that directly feeds Karen communities. That self-sufficiency is central to Karen identity. “We call our forests ‘life,’” says Professor Chi. “We are most afraid of state policies that will make us lose this life source, and with that, our rights, our capabilities, our power in society.” That life increasingly comes under question with the encroachment of the state on forest land. The thick presence of the state in Karen communities is not mirrored by access to the services that other Thai citizens enjoy. Many Karen do not receive any official welfare or support from the government. A local government official in Chiang Mai province remarked in an interview that many Shan and Karen are part of the chumchon (community) but are not Thai because they do not have a Thai national identification (ID) card. Only last year, Karen spiritual leader Ko-ei finally received his Thai ID card at the age of 107.

It is perhaps due to this colonial othering that the Karen are curiously absent from Thai—or Bangkok—politics. The Karen are rarely brought to the fore in national conversation, not even when the Karen activist Billy was killed or when a Karen became a Future Forward Member of Parliament upon party leader Thanathorn Juangroongruangkit’s disqualification. Neither the military nor the central government actively attack the Karen. Rather, they are made invisible.

Reshaping public perceptions of the Karen

Throughout the course of ‘Rice for Fish’, Pokhwa Production, a Facebook page about indigenous peoples’ projects, gained a strong and dedicated following. Each of their posts garner thousands of likes and hundreds of comments, with live videos documenting the program’s progress consistently drawing upwards of 2,000 viewers. Foremost in Pokhwa’s vision is how indigenous people are represented.

Oh, the admin of Pokwha Production, believes his job is about transforming the government’s unidirectional projection of Karen identity into a two-way dialogue, describing the project as “a constant negotiation over what the truth is.” To counter the blame narrative, multiple Pokhwa posts highlight the essential role that Karen locals have played in fighting the forest fires: tributes to volunteer Karen firefighters who have died in the line of duty, narrations about overnight firefighting missions, and mentions of the dried fish from the ‘Rice for Fish’ program. Pokhwa highlights the variety of produce grown among indigenous communities in the north, from tiny, red tomatoes to shimmering purple shallots, with long narratives of what sustainable slash-and-burn agriculture looks like.

While defining ‘Rice for Fish’ as a distinctly indigenous initiative, Professor Chi and his team also want to shift Bangkok-centric conceptions of what it is to be Thai. By emphasising the diversity of indigenous communities across the nation, and the communal bonds between them, projects such as Rice for Fish and Pokhwa Production subvert the colonial narrative of a monolithic Thai-ness opposed to a pa otherness. “Kwam pen Thai [Thai-ness] is… accepting the diversity of being Thai,” says Oh. The hope is that the Thai state will eventually recognise this diversity. Underpinning the ‘Rice for Fish’ program and Pokhwa’s emphasis on indigenous self-reliance is a vision of decentralised governance. For Professor Suwichan, greater local autonomy and less encroachment from the Thai state is the only way to sustainably manage local resources. But for that to happen, more state officials need to believe that indigenous people are the rightful custodians of forest land.

The Indigenous Peoples’ Association is fighting hard. They are pushing for an Indigenous Peoples’ Act which, if passed, will guarantee land rights for certain indigenous groups. They have garnered the support of the royally-sponsored Sirindhorn Centre—a crucial vote in their favour, as the royal family has a long history of involvement in state decisions on the management of Thai forests, most explicitly through the Royal Forestry Department and the Royal Projects.

A role for the state still exists, but should be envisioned through a decentralised lens. Welfare and crisis response should build on robust institutions at the village level, as opposed to focussing on broad-brush national stimulus measures often stymied by issues of red tape, unclear criteria, and opacity. As Walker explains in relation to north-eastern Thailand’s Ban Tiam village, many Thai do not use the formal word for state (rat). Rather, locals use the word for municipality (tessaban) or would name a specific local official when talking about the state instead. These officials are the go-to people to contact through LINE whenever a problem emerges—from running out of water and needing to check the village pump, to dealing with the aftermath of a fallen tree due to a storm. 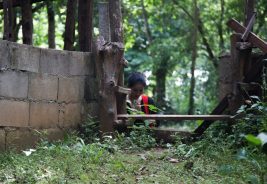 “We try to not be Thai”: the everyday resistance of ethnic minorities

How two ethnic minority groups, the Lisu and the Maniq, continue to challenge the Thai state's sovereignty

The proximity of local government officials to the ground highlights their potential role as key agents in pursuing more formal state support for Karen communities. The Chiang Mai government official also differentiated between the rataban (state-level) and tessaban (municipal-level). During the pandemic’s outbreak, tessaban officials were the first movers in ensuring that everyone wore a mask, disseminating reliable public health information, and ensuring mobility restrictions. The reliability and proximity of the tessaban reflect the important role that a decentralised bureaucracy can play, instead of hinging debates and conversation around the military-led central government.

The Karen have been hit by a dynamic multiplicity of issues—the forest fires in Chiang Mai, the pandemic and corresponding movement restrictions—but they have responded through innovative cross-country initiatives and highlighted their desire for community. With the nation reopening into a ‘new normal’, there is hope that ‘Rice for Fish’ will provide momentum for substantive reforms based on new forms of social inclusivity and a more diverse ‘Thainess’. 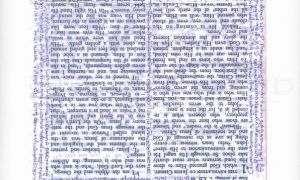