Earlier this week, New Mandala brought you a pair of short reflections from Thai scholars on the significance of the cremation of the late King Bhumibol. Today we also are pleased to share the thoughts of two well known scholars of Thailand based in the west.

Patrick Jory from the University of Queensland says that as far as the political significance of the royal cremation goes, it’s a case of “same old”:

I have an embarrassing admission to make. I have written about Thailand’s monarchy and I ought to be interested in a once-in-a-century moment: the cremation of King Bhumibol, the longest-reigning king in Thailand’s history. But as difficult as it is to say it, I found the whole event, well, boring.

King Bhumibol’s passing has been drawn out over the best part of a decade. As is well known, over the course of this long period the monarchy has become intensely politicised, following the overthrow of the democratically-elected Thaksin government in September 2006. Since then millions of words have been written about the monarchy, and King Bhumibol in particular, by royalists, republicans, constitutional monarchists, Yellows and Reds. One day, when the political climate in Thailand changes, new source materials become available, and people are finally free to speak out without fear of imprisonment or worse, we may learn something new about King Bhumibol. But in commentary on ritual events we tend to hear or read the same tired clichés—sometimes coming from prominent scholars in the field who should know better.

The boredom is partly to do with royal ceremony overkill. Since the decade-long political crisis that has enveloped the monarchy the royalist propaganda machine has gone into overdrive. Royal ceremonies of one kind or another are staged almost constantly, with the aim of maintaining a constant level of slow-burning royalist frenzy.

The royal cremation, despite the rarity of such events, the colourful costumes, the elaborate and imposing crematorium, and the arcane Hindu-Buddhist funereal rites, is in fact simply a variation on the usual theme of royalist propaganda. It projects the same message as all other royal rituals. The king is “god-like”, a future Buddha. He is loved by all his subjects (not “citizens”). His royal servants (kha ratchakan) loyally carry out his wishes. Thais are united in their loyalty to the monarchy. Of course, all these messages are untrue, which is why the ritual must appear as spectacular as is humanly possible.

As Clifford Geertz argued in his famous Negara: the Theatre State in Bali, this is the function of such ritual: to produce an idealised representation of how the state is ordered. As everyone knows, Thailand remains deeply polarised. The only space in which unity can be presented is in these confected and highly-controlled royal ceremonies. Hence the reason the managers of Thailand’s “theatre state” keep up a regular calendar of royal rituals. In these rituals “the people” are mere spectators—onlookers. Their only role is to affirm this idealised order, and to be seen to affirm it. Royal ritual is thus a metaphor for Thailand’s current politics.

The heightened degree of theatricality in royal rituals is in inverse proportion to the actual workings of the monarchy, and King Bhumibol’s own career. Critics of the monarchy are tried in camera, locked away in jail for years, or forced into permanent overseas exile. The monarchy’s political interventions are veiled in secrecy (does it operate through a “network”? Or is it at the centre of a “deep state”? Or?). Its financial affairs are opaque. The history of democratising, anti-royalist politics is erased.

The way the monarchy’s true function is kept secret is a kind of a modern-day version of the feudal practice when royal subjects were forbidden from gazing upon the monarch on pain of death.

Instead, we have the tedium of royal ritual.

Tyrell Haberkorn, until recently of the Australian National University and soon to join the University of Wisconsin, Madison, notes how the royal cremation provided a sideshow, in the form of an activist’s “an unplanned, forced vacation”, that raises questions about the nature of authoritarian rule in Thailand:

On 20 October, Ekachai Hongkangwan announced via Facebook that he planned to wear red and go read a book in a café for an hour or so on the day that King Bhumibol Adulyadej was cremated. To say that this unsettled the authorities is a gross understatement. A warning from the police came within a day in the form of an unannounced visit to his workplace. Ekachai maintained that his statement and planned actions were not in any way a violation of any law. Three days later, on 24 October, fourteen police and soldiers in and out of uniform banged on the door of his house and demanded he come with them. They gave him two options: go on a “vacation” to Kanchanaburi or spend time in a military camp until after the cremation. He chose Kanchanaburi but declined the authorities’ offer to bring his mother on the unplanned, forced vacation.

Ekachai, an activist and former political prisoner, was returned home, as promised, on 28 October after the cremation ceremonies were complete. He gave an interview to Prachatai several hours after his release that reveals both the overt violence—he was assaulted when the police and soldiers came to his house—and the absurdity—the authorities gave him 5000 baht in spending money, but then the officials accompanying him (to restrict his freedom) waited for him to pay for meals—of what took place. Thai Lawyers for Human Rights immediately called this unplanned, forced vacation by its actual name—arbitrary arrest and detention—in contravention to both Thailand’s obligations under international human rights law and the “law” of the NCPO itself.

Many times since the 22 May 2014 coup, I have written or said that what is taking place requires new kinds of thinking and new forms of analysis. The end of the reign of King Bhumibol and the beginning of the new reign does as well. For the past month, scholars, journalists and other commentators have interrogated the social, political, religious, cultural and economic meanings of the cremation and the participation of millions of Thais in it. But as a person who tends to approach Thai political history from what Christopher Krupa and David Nugent call “off-centered locations of analysis” outside the usual centers of power, my view is that Ekachai’s arbitrary arrest and detention, in addition to what took place on Sanam Luang, demands critical analysis. In the spirit of contributing to the urgent analysis that the present requires, here are three of the questions which arise:

1. What unsettled the authorities about Ekachai’s announcement? That he dared to suggest wearing a colour other than black on the day of the cremation? That he planned to go to a café and read a book? His announcement was one of a planned personal action, not a call for others to join in any kind of expression or protest. What is it about independent thought that frightens the authorities? (A note: Independent, critical thought is precisely what universities, including those in Thailand, hope to encourage in order to develop new knowledge, and rise in the rankings. Independent thought by an organic chemist or theoretical physicist would be lauded, but by an ordinary citizen is dangerous and must be stopped.)

2. Even in the flexible legal regime of the NCPO in which “law” is stripped of its meaning, the police and soldiers could not accuse Ekachai of any crime. So, in the tradition of many earlier regimes, they arbitrarily arrested and detained him; also in the tradition of many earlier regimes, they attempted to mask this fact by taking him to waterfalls and tourist sites in Kanchanaburi, rather than placing him behind bars (this article details this history in Thai, and the first chapter of this book does so in English). Do the authorities think that arbitrary arrest and detention appears any less coercive or violent when carried out under the guise of an (unplanned, forced) vacation? Do the authorities realise that this attempt to mask arrest and detention fails and also generates fear and insecurity about the possibility of disappearance? Are they naïve, cynical, or a combination of both? What is in the minds of the authorities does not affect the experience of those who become their targets, but it may reveal the kind of regime and society they imagine and aim to build.

3. What kind or mode of analysis might be capable of answering these two questions, and many related ones, including why the arbitrary arrest and detention of Ekachai Hongkangwan should signal a crisis and moment of danger for Thai society, not only one individual? In her recent book, The Future is History: How Totalitarianism Reclaimed Russia, Masha Gessen criticises the failure of humanities and social science scholars to understand the ease of the destruction of the possibility of democracy and the return of totalitarianism in Russia. Drawing on Hannah Arendt, she writes that, “In functioning democracies the contradictions between avowed ideals and reality can be and often are called out, causing social and political change. This does not eliminate the built-in gap, but it has a way of making societies a little more democratic and a little less unequal, in spurts. Totalitarian ideology allows no such correction….There is no gap between totalitarian ideology and reality because totalitarian ideology contains all of reality within itself.” Her analysis is resonant with present-day Thailand. If one were to parse the gaps between ideology and reality in Thailand, beginning with the last two weeks of October 2017, where would one begin? One place might be to the off-centered locations of analysis which may seem far from power but are in fact key to its maintenance, like resorts in Kanchanaburi. 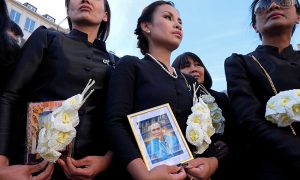