Nearly 8% of Yangon’s population lives in informal settlements, or kyu kyaw, where they reside on land without being registered with local authorities and/or without ownership or rental documents. Hlaingthaya, a hub of manufacturing factories, is home to a third of all informal urban settlers in Yangon. Yangon’s fastest growing township, Hlaingthaya’s factories have attracted thousands of rural migrants, especially young women working in the garment industry. In Yangon, it is arguably the lives of women residing in informal urban settlements which are being most devastated by COVID-19.

Informal urban settlers are unable to follow public health directives to reduce the spread of COVID-19. Many live in crowded slums, where several families at a time might share a house. “Social distancing” is impossible. Many also live without basic sanitary facilities, with only 33% of Yangon’s population able to access piped water. Meanwhile, the influx of migrants to these already low-resource communities places a significant strain on the reach and effectiveness of public services. Law enforcement in Hlaingthaya is stretched thin by higher rates of poverty and crime compared to other areas of Yangon. Between January and September 2019, 16% of murder cases in Yangon occurred in Hlaingthaya.

Few households can afford emergency expenses if someone gets sick. 94% of households in informal settlements are earning less than before the pandemic. 69% have taken out a loan during the crisis, mostly to buy food. Women squatting or living on illegally sold land rarely have the documents required to access social security and health care services. Only social security card holders can access free health treatment at clinics run by government’s Social Security Board, which service only around 2.5% of Myanmar’s population.

For women in Hlaingthaya, the economic impact of COVID-19 has so far been more devastating than the virus itself, affecting their hand-to-mouth struggle for everyday survival. An assessment by UN-Habitat found that more women (88 percent) than men (75 percent) in informal settlements have lost their jobs during the crisis. Women are also more worried about being evicted from their homes than men.

Beyond these health and economic impacts, the pandemic is exposing women in urban informal settlements to another, more hidden danger: escalating rates of domestic violence, exacerbated by  movement restrictions. Hlaingthaya was included in the list of areas subject to partial lockdown measures and de facto curfews imposed in April (with some measures partially lifted in May). People were required to stay at home except when going to work, with only one person per household allowed to leave to buy food and essential supplies.

The normalisation of domestic violence in Myanmar

Domestic violence was already prevalent in Myanmar before the pandemic. The normalisation of violence against women is evident in proverbs such as “the son is the master and the husband is the god”, “the more you beat her up, the more (she) loves you” and “never have mercy on your wife or your cow”. Entrenched gender ideals and cultural norms impact women’s ability to talk about abuse and leave violent relationships. Being a “good mother” and a “good wife” involves absorbing or tolerating manifestations of stress from partners, children and parents. Violence against women is widely perceived as a domestic rather than public issue.

The Ministry of Health’s 2015–16 demographic and health survey found that more than 1 in 5 married women had been beaten by their husbands, with more than half believing wife beating was justified in certain circumstances. Only 1 in 100 sought help from the police. More than a third never told anyone what they had been through. Violence against women and girls was identified as the biggest safety concern in ActionAid Myanmar’s safety consultation findings in Hlaingthaya in 2018.

The pandemic has created conditions that only aggravate tensions in the home. Families are confined to their apartments, facilitating surveillance and making escape from abuse much more difficult. Even women in the middle of legal processes or community mediation over abuse have been forced into lockdown with the perpetrators. Meanwhile job loss and reduced income can lead to men feeling inadequate in their socially prescribed roles as the head of the household. Some choose to let out their frustrations on their wives, children and mothers. In the conditions of social isolation brought on by the pandemic, normal cultural controls over behavior are weakened and violence slips under the radar.

The high numbers of migrant workers living in informal settlements make the challenge of establishing effective community services to assist victims of domestic violence especially complex. Relations in informal urban neighborhoods are often characterised by tension and distrust due to competition over land, crime and fear of new faces. Residents often distrust unknown outsiders moving into their communities and in some cases stereotype them as criminals. Although cases of domestic violence can be well-known, strained relationships mean neighbours may be reluctant or uninterested in intervening.

Single women who migrate to Hlaingthaya in pursuit of employment are often isolated from their neighbours. Often living in hostels, they do not have networks of support and are at risk of attacks by strangers and xenophobic harassment. Women arriving to the city often rely on strangers for accommodation and employment, conditions that contribute to both exploitation and a culture of victim blaming. Women often choose not to disclose abuse, fearing that they will be judged and held responsible for placing themselves at risk. Isolation means that many women in informal settlements are also unaware of the services available to them in the first place.

No safe shelter exists for women in Hlaingthaya, who are further discouraged from reporting abuse by the often-unresponsive attitudes of police and local administrators. Actions to address domestic violence are pushed to the side in the “vice city”, with police and government staff preoccupied with high rates of crime, land conflict and labour disputes at factories.

Support for women who experience domestic violence is well-established in neither Myanmar’s healthcare nor legal system. No law criminalises domestic violence in Myanmar, with the Prevention of Violence Against Women Bill pending legislative consideration. Meanwhile, the government’s COVID-19 Economic Relief Plan (CERP) aims to strengthen the healthcare system, while mitigating the social and economic impacts of the pandemic. Yet the CERP makes no mention domestic violence, or even the issue of gender-based violence (GBV) more broadly. If the government is serious about alleviating the devastation wrought by COVID-19, it must address the heightened risk of domestic violence that women face.

Second, movement restrictions limit the spaces and privacy that women have to seek out help. Virus containment measures such as the lockdown have affected women’s access to GBV-related services, with service providers closing their offices, working from home and transitioning online. The Ministry of Social Welfare, Relief and Resettlement continues to provide GBV-related helplines. A range of civil society organisations have also established or scaled up services. International Alert, for example, runs an initiative on social media providing information on GBV, services run by women’s organisations and phone numbers for reporting. But helplines and social media services rely on women having access to phones and the privacy from their abusers to make calls.

In informal settlements such as Hlaingthaya, isolation and stigma mean women experiencing domestic violence may be reluctant to seek out help even when it is available. One solution is for government officials to work together with community-based women’s groups to design locally responsive services. Organisations such as the Women Federation for Peace (WFFP) are critical. WFFP members live in Hlaingthaya and understand the needs of local women. They have worked at a grassroots level to facilitate dispute resolution mechanisms overseen by community leaders, such as domestic reconciliation and mediation efforts. In doing so, they have played a crucial role in driving women’s willingness to challenge violent behaviours by providing an alternative for women who do not want to turn to formal justice processes.

State services should draw upon the expertise of women’s groups, who have earnt the trust of local women and understand the specific needs of domestic violence survivors through their access to the local community. Engagement with women’s organisations is essential to developing services tailored to the specific challenges that beset informal settlements, such as the isolation of women from both community networks and state communications.

In partnership with women’s organisations, the government could undertake a public awareness campaign to push against social acceptance of domestic violence, while ensuring that information on hotlines and state services reach all women. It is also important to design low-tech options for accessing GBV services for women who do not have access to mobile phones or who cannot make a call when at home with their abusers.

Given the particular vulnerability of women during the pandemic, social assistance schemes under the CERP should prioritise women who have lost their livelihoods during the crisis, women experiencing domestic violence and survivors of gender-based violence. Without a focus on violence against women and girls, the government’s COVID-19 response risks contradicting the CERP’s promise to “leave no one behind.” 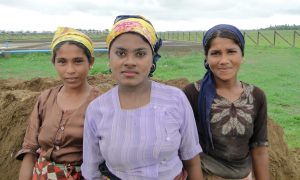