"The advent of the Commoners’ Party represents a more exciting, radical break with the status quo [than the Future Forward Party]—one that has so far kept class privilege of the likes of Juangroongruangkit intact," writes Kriangsak Teerakowitkajorn.

With the National Council for Peace and Order (NCPO) slowly but gradually lifting restrictions on campaigning, scores of new political parties have stepped into the fray. Careful not to run afoul of the recently revised and tightened organic law on political parties, they are making sure their steps are in sync with the slow pace set by the junta. For over four years, Thais have patiently waited to cast their ballots, and parties are keen to stay qualified for the long-awaited game of musical chairs.

Among the new parties, two appear to represent the coming of hope, even for the impatient and the disillusioned—the Future Forward Party and the Commoners’ Party. Both cater to distinctive constituencies. Together, they present a sort of contradictory complementarity much needed in Thai politics.

(I note inconsistency in how English-language media spell the latter. While the Thai word samanchon is singular, independent media including Prachatai and The Isaan Record translate it as plural. By contrast, there is no consensus in mainstream media. Whereas Khaosod English uses the adjectival form—the Commoner Party—the Nation confusingly employs both the adjectival and plural forms. Here, I follow the usage of independent media outlets.)

The Future Forward Party is led by a group of upper-middle and middle-class urbanites, scholars and activists, who previously played commentator roles from the periphery but appear now tired of second-hand democracy. Thanathorn Juangroongraungkit—a son of the Thai Summit family, which controls the biggest automobile company in Thailand—heads the party, now one of the most followed on social media. Future Forward presents itself as the third force, or a remedy to polarised politics.

Thanathorn is more than meets the eye. Despite his wealth, he has long been active in Thai progressive circles and is well known for his left-leaning ideals. Thanathorn’s politics crystallised during his period of student activism as the vice-president of Thammasat’s Student Union and the deputy-secretary of the Student Federation of Thailand. Regularly making rounds in Thai social media is a photo of Thanathorn caught between the police and the Assembly of the Poor, a front-page moment and a good caricature. In many ways, he represents the contradictions reshaping Thai contemporary politics. The Future Forward Party is well positioned to tap into pro-democracy factions that shun Thaksin’s party line, including independent labour unions in metropolitan areas. He is aided by many progressive scholars and leftist activists including Piyabutr Saengkanokkul—an active member of Nitirat, a group of politically-critical legal scholars—and Sustarum Thammaboosadee, a committed advocate of the welfare state. Both are foreign-educated, young professors at Thammasat University. Thanathorn and his team have been well received even by mainstream media. 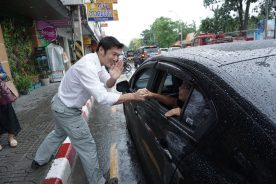 But Future Forward may only be a case of Thai urban, organised labour being left with the “lesser of two evils”: token representation. As the leftist scholar-in-exile Giles Ungpakorn comments, the Future Forward Party “is likely to be a party aimed at sections of the pro-democracy middle classes. It will prioritise the free-market and business interests while also claiming to support the poor in an abstract manner. Its leader, tycoon Thanathorn Juangroongruangkit, has stated that it will ‘protect capitalism for the benefit of the majority’. In the past, he has emphasised that business must make a profit before benefits for workers can be improved.”

Future Forward may offer a way out of military dictatorship, yet it is hard to imagine a set of coherent policies that is simultaneously laissez-faire and pro-labour, not to mention inclusive of meaningful power-sharing with the working class. Previously a lecturer at Thammasat myself, I share much of my background with the two scholars who support Thanathorn in moving the Future Forward. Nevertheless, as a labour advocate, I grapple with the contradictions between the party’s class interests and pro-labour claims.

In my view, the advent of the Commoners’ Party represents a more exciting, radical break with the status quo—one that has so far kept class privilege of the likes of Juangroongruangkit intact.

Contrary to the Future Forward’s elitist, think-tank style, the Commoners’ Party sets out to be governed by the working poor. Although some co-founders are from urban middle-class backgrounds, the party’s identity is shaped by shared concerns around the poor’s lack of power and the destructive impacts of uneven development in the Northeast—a region of origin for many activists.

Against the backdrop of hierarchical politics commonplace in Thailand, the Commoners’ Party has pledged to be truly bottom-up and build policies from the ground—an ideal I wholeheartedly support though follow with baited breath. Unlike Future Forward which centres on leaders’ charisma and grand ideas, the Commoners’ premise is to create a genuine platform for the voices of villagers, hitherto silenced or non-existent in parliamentarian politics. The party itself grew out of a grassroots movement that bears the same name comprising political activists and NGO workers from various right-based issues.

Despite state surveillance and restrictions on campaigning, the Commoners’ activists have been organising forums across the country to provide a platform for locals to voice concerns over various issues including communal rights and environmental justice. Early this year, the party led a group of protesters in marching over 450 kilometres to help shed light on neglected but crucial issues of food security and community control over natural resources. Most importantly, it may be the first time since the heyday of the 1970s student uprisings that a Thai political party has explicitly discussed social-democratic policies.

Having known the Commoners’ founders and some of its activist members myself, I cannot deny that the transition from a social movement to fully-fledged political party is full of contradictions: here comes to mind the image of a banner with an anarchist symbol that decorated the site of the party’s first general meeting in late September 2018. According to the Party’s elected chief Lertsak Kamkongsak, the activists have taken inspiration from a number of sources: Western-style green parties, eco-socialism, anarchism, European Pirate Parties, and the indigenous Zapatista group. The idea of creating a political party was entertained for years by a co-founder and the secretary-elect of the Commoners’ party, Kittichai Ngamchaipisit—a veteran peace activist and strategist who is personally drawn to Gandhi’s philosophy of non-violence and the Zapatistas’ style of direct democracy.

Soon after the Commoners’ first general meeting, the party was forced to face reality. It was struggling to meet the legal requirements of having a million-baht initial fund and five hundred members. Yet the Party has finally overcome the hurdles, having a first taste of what it’s like to play this electoral game.

The Commoners’ activists may be new to elections, but they are not to street politics and building grassroots movements. Lertsak has years of experience in organising with communities resisting extractive mining and dam projects. The trust bestowed on him testifies to the underlying issues important to his constituency: social inequality, economic exploitation, environmental degradation, and the marginalisation of the rural poor in the political process. In this sense, the Commoners’ Party embodies undercurrent ethno-regional and class indignations suppressed over several decades of uneven development.

These are, of course, crucial concerns shared also by red shirt supporters. But within the proxy war of rival elites, these issues have not only been unaddressed, but aggravated by competing populism.

Despite my excitement and optimism, realistically the Commoners’ and Future Forward parties are and will be a minority in Thai politics. This realisation makes the idea of working together imperative. Yet according to Kittichai, regrettably irreconcilable differences between the Commoners’ and Future Forward foreclosed the prospect of merging the two.

I join other activists from the left who are suggesting that the two parties collaborate. That collaboration would need to take power differentials into serious consideration. What the Commoners stand for—the interests and livelihoods of their poor constituency—sit uneasily with the privileged positions of Future Forward’s supporters.

Given that their target constituencies would be mutually exclusive, the least the two parties could do is to endorse each other’s candidates. They could also make sure that their platforms do not compete, or cancel each other out. Apart from shared anti-coup sentiments, there are a variety of concrete issues they could jointly discuss ranging from downsizing Special Economic Zones, strengthening universal health care, advancing the idea of welfare state through progressive taxation, as well as land reforms and a living wage.

Both parties have their own strengths, which are variously oppositional and complementary: one pushes for change from above, the other from below. While Future Forward is well endowed with financial and social capital, as well as a well-versed network of scholars, the Commoners have deeper understanding of uneven development and how to work with the masses beyond the ballot. 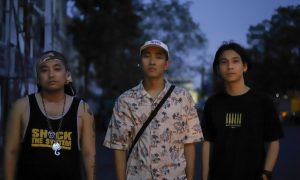 The young rappers who shot to national attention when they released Prathet Ku Mi honed their skills in a vibrant Thai indie rap scene that has been growing bigger in recent years—and growing more political, too. 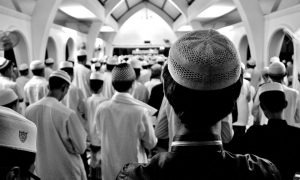