When COVID-19 was recognised as a global pandemic in 2020, we heard from many civil society actors in Cambodia who held strong fears about its potentially critical impact. They anticipated that the spread of the pandemic, in combination with people’s fear and the government’s tightened regulation, would significantly restrict the space for their campaigns and reduce their autonomy. Approximately a year since then, fear has turned into reality. If there has been any difference from what was anticipated, it is that the impact is worse than predicted.

A minimum space for activities

An immediate impact of COVID-19 has been the restriction on human mobility. Since March 2020, the government has adopted various regulations in order to control the social transmission of the virus by minimising human interaction, including the complete lockdown of Phnom Penh imposed between April and May 2021. While the impact of such restricted mobility and gathering has a negative influence on all aspects of social activities, it has had a particularly critical impact on the civil society sector whose activities were not considered essential for managing people’s livelihoods. According to a human rights organisation in Phnom Penh, almost all existing projects for human rights advocacy have stopped operating. As all inter-provincial travel requires the approval of local authorities, practitioners are no longer able to conduct meetings with local staff members; capacity building programmes, outreach programmes, and legal consultation processes in the communities have had stop. Some legal aid procedures at the court have also become stuck.

Moreover, most new proposals submitted to donor agencies are “on hold” for approval due to the uncertainty of prospects for implementation. This implies that the chance of new project initiatives in the forthcoming years is extremely narrow. For instance, ActionAid Cambodia, an international human rights advocacy NGO, has had to stop almost 70% of its projects since the outbreak of the pandemic. Cooperation Committee for Cambodia (CCC), an organisation that acts as the hub of the NGO network in the country, has struggled to maintain programmes with local NGO network members.

NGOs have sought alternative ways to carry on their activities by using online communication methods such as Zoom, Microsoft Teams, Facebook messenger, and Telegram, in order to maintain communication amongst their staff and with other stakeholders. While such new technology certainly helps, it benefits only the practitioners who can access high-quality internet and are able to use online platforms. More importantly, in the sector of human rights protection, many types of activities do require physical visits and face-to-face communication due to confidentiality issues and the need for physical paperwork. Therefore, the voices of and inputs from communities and civil society in national strategic development planning have not been heard.

The global pandemic has had a critically negative impact on the financial conditions of many NGOs. Finding no alternative way to maintain the income generating programme, a large number of small-sized local NGOs have ceased operations. This challenge is two-fold.

Firstly, the amount of funding from foreign donors is being radically reduced. For instance, one local NGO that supports the Cambodian diaspora in Vietnam confirmed that it just failed to secure funding from a donor which was previously pledged. In many cases, the communication of such decisions comes out of blue, due to challenges that donors themselves hadn’t predicted. Moreover, many local human rights advocates had to stop their overseas travel, which has previously been conducted on a regular basis in order to build and maintain working relationships with foreign donors and partners.

Secondly, many income-generation programmes operated by these NGOs, based on local community activities for mobilising operational funding, have now stopped. Programmes that relied on international tourists who visit Angkor Wat have had almost no customers for a year since May 2020 due to the international travel restriction. Moreover, programmes that targeted foreign customers have also stopped; these include Cambodian Living Arts, Phare Ponleu Selpak and Chab Dai Coalition, which had gained extra income through presentation of art performances and selling souvenirs. Other types of activities that targeted Cambodian community members were also seriously affected. For instance, an NGO that has earned on average approximately 20,000 USD per year from house rentals faces many tenants who have not been able to afford rent throughout the previous year.

It is notable that, from a short-term perspective, the impact of COVID-19 is less significant for international NGOs that maintain more stable working channels with foreign donors. Our communications with some international NGOs confirmed that their funding sources remain healthy. The EU has even increased its funding, especially for COVID-19 response and recovery. However, as most of their Cambodian partner organisations struggle with the funding crisis, these international organisations cannot operate programmes which rely on their partners’ collaboration. Moreover, from a longer-term perspective, these organisations feel unsure about the situation they will face once the pre-confirmed funding flow comes to an end.

State regulation over the civil society

There have been warnings and concerns about the risk that the governments in some countries may utilise COVID-19 as an opportunity to further suppress the civil society movements which are anti-authority by nature. There were reports from countries like Myanmar and Indonesia that their governments, purportedly in the interest of public health, have adopted new laws, surveillance and other restrictive measures that have serious implications for civil society activities.

Cambodia is no exception, and the government’s attempt to control the activities is applied in two main ways. First, there are tight regulations on every aspect of NGOs operations. A range of activities that are not directly relevant to COVID-19 transmissions are being prohibited under vague but comprehensive regulation packages. An international NGO manager mentioned that freedom of expression at the individual, institutional and community levels became impossible while illegal logging, illegal fishing and filling-in of the sea for development projects continues. There were reports that some NGOs had even struggled to get permission from local authorities for a programme to distribute personal COVID-related protective materials like masks, alcohol and hand sanitiser to the poor villagers, and they had been under constant surveillance by the local authorities during the distribution process. Things became significantly more challenging as the Law on Governing the Country in a State of Emergency was enacted on 9 April 2021.

Second, a lack of transparency enables the government to apply any regulations without providing any substantial and scientific grounds. As for the system to collect, analyse and disseminate data on the internal transmission of COVID-19, there has been a public suspicion that the government’s updates are being manipulated according to the political needs. Civil society actors were not given any reliable source of information to verify the validity of the government’s statements, and were not included in any consultation about the social regulations/arrangements applied as part of the state responses to COVID-19. 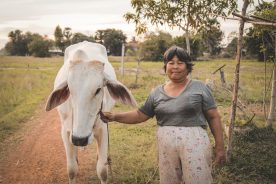 Related to the above point, people are also concerned that the Sino-Cambodia connection seems to be getting stronger in the midst of COVID-19. It’s been a while since China emerged as the most important partner of these countries for economic, humanitarian, and development collaboration; this international tie offers the Cambodian government important grounds to compromise or ignore many Western donors’ demands for improving human rights and transparent governance. Over the past few years, Cambodia’s challenges to such demands from European and American partners have become significantly more direct and outspoken.

During the pandemic, this unbalanced influence from foreign actors is intensifying. Having had a critical impact in their own territories, many Western countries are in competition to secure more vaccines and to tighten the regulations for international travel. These conditions put many developing countries like Cambodia in a challenging situation for international cooperation. In contrast, China is increasing its material and diplomatic support to Cambodia. Thus far, China has provided three shipments, totalling over 1,700,000 doses, of Sinopharm, the vaccine that it developed. This far outnumbers the 324,000 doses of the AstraZeneca vaccine that were received from COVAX Facility of the World Health Organisation.

This not only strengthens the government-to-government friendship; it draws the attention of the Cambodian population despite suspicions about the quality of the vaccines. To many human rights advocates, China’s increased influence means that the political authority will care less about international pressure to enhance human rights in the country. Such fears held by the Cambodian civil society are being intensified by China’s role in disputing Western powers’ criticisms of the military coup in Myanmar.

In short, the combined impact of the restricted physical mobility, a plunge in funding, and stronger government control means that human rights organisations in Cambodia are facing one of their most challenging situations in recent times. The people with whom we communicated also expressed their concerns that they need to manage these challenges while also dealing with the formidable (and real) threat of COVID-19. Most of these issues are likely to continue, if not become exacerbated, even after the ongoing pandemic itself is brought under control, unless some immediate actions to alleviate this risk are undertaken. As their traditional partners are unable to maintain the same support, these human rights activists question if civil society actors in countries which have been less significantly impacted by COVID-19. like Australia and New Zealand, can turn their attention to them. 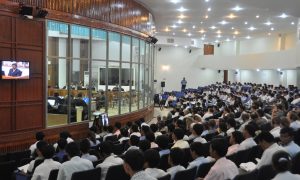 While survivors often become emotional when speaking about the past, they feel younger generations must learn from the past to prevent genocide in future.