The poor know they’re poor: the roles of shame and stigma in the everyday lives of people in poverty

“To provide equal opportunities, while addressing discrimination and structural barriers… We need policies (that consider and address) … mental barriers that contribute to perpetuating poverty,” said Antonio Guterres, the UN Secretary-General, during the Commemoration of the International Day for the Eradication of Poverty on 17 October 2018. The previous year, Guterres’ speech on the same day emphasised “inclusivity of the process” to achieve “welfare” and “life with dignity”, which should be “for all”.

At the global level, the UN discourse on poverty eradication have been adopting some human rights concepts through acknowledging structural and institutional barriers. This is a more comprehensive approach to understanding poverty. However, approximately 800 million people still live in extreme poverty across the globe, including significant numbers of women, children, people with disabilities, indigenous communities, and refugees. Great challenges remain in eradicating poverty: the underlying problems are interconnected with other complex issues, which has no universal prescriptive solutions.

The situation at the international level provides reflection on domestic (state) level issues. Indonesia, a heterogeneous country with 255 million citizens, is improving in poverty reduction but still faces challenges in resolving extreme poverty. Many scholars, policymakers, and think tanks have produced studies on the efficiency and effectivity of certain anti-poverty policies. The majority approach the issue through an economic or political lens with few studies undertaken to examine the issues of poverty from a human rights perspective.

The economic lens towards poverty could affect the conceptualisation, measurement and policy approach to solve the issue. The notion of shame, stigma and social exclusion remains foreign in conversation about poverty reduction in Indonesia. Yet, shame and stigma exist in the grassroots—they have influenced the way people experience poverty and its roles in contributing to the poverty trap. Inspired by the work of Robert Walker in his book The Shame of Poverty, I lay down some possible ‘missing puzzles’ in unpacking the problems of poverty, which may help us to better understand the complexities and multidimensionality, especially in the Indonesian context.

As a country that celebrated its progress in reducing poverty under 10 percentage late 2018, Indonesia still faces problems tackling persistent poverty. Approximately 25 million people continue to live under extreme poverty in Indonesia, while noting the national poverty line is relatively low compared to other middle-income countries. Poverty in Indonesia is a complex issue with no clear-cut problem definition nor a single legitimate effective solution. The Government of Indonesia has been employing economic, education and social policies to accelerate poverty reduction efforts since the Reformation at the end of 1990s.

Talking about poverty, it is important to know how Indonesia measures poverty to reveal how policymakers conceptualise the issue and inform politically-calculated decision-making, thus proving shame and stigma are still missing from the discussion. In the 1990s, the Indonesian Bureau of Statistic (BPS) started to adopt the basic needs approach, which primarily measures poverty based on income-proxy/consumption rate, while occasionally adopting the multidimensional poverty indicators. In terms of consumption rate, the Government measures whether each household could afford to consume at least 2,100 calories per adult per day as a proxy to USD 1.99—and if they are not able to then they are categorised as poor. A different measurement beyond income/consumption was adopted by the Government of Indonesia through the Capability Approach. This approach applied a broader range of dimensions to poverty in the late 1990s, through the use of the National Socio-Economic Census (Survei Sosial Ekonomi Nasional), Households Welfare model (Survei Kesejahteraan Rumah Tangga), Welfare Indicators and the Human Development Index. This measured more complex dimensions such as food, fuel consumptions, access to electricity, shelter conditions, average years of education, infant and maternal mortality, and household and villages infrastructure and facilities. The units of analysis for these poverty measures are varied from provincial, district, village, to household levels.

The problem arises when we are trapped in materialistic ways of thinking about poverty and not giving enough attention to non-materialistic aspects, which can shut the window for possible policy-options. Despite lack of material goods, such as income, shelter, food and clothing, being an extremely important aspect of poverty, non-material aspects can also contribute to poverty in different ways.

What if there are other factors that contribute to how the poor perceive, feel and experience poverty? When I mentioned ‘perceive’, ‘feel’ and ‘experience’, some of you might start to be sceptical –we have been raised to ‘find the fact’ of poverty and less to ‘untangle it’ or try to understand the situation from the poor’ stands. We have not given much thought to how the poor feel and experience poverty. What if these factors affect the engagement, inclusivity, and effectiveness of anti-poverty policies that the Government of Indonesia has been implementing? Robert Walker in his book, The Shame of Poverty, argues that the element of shame, humiliation, and stigmatisation are a large part of how the poor experience poverty, where he investigated these nuances in 13 countries, both in the Global South and Global North. My research aimed to investigate Walker’s argument in the local context of South Sulawesi in Indonesia, to see how relevant it was, and what the nuances are in South Sulawesi context.

Based on my fieldwork in two locations of urban and peri-rural communities, shame and stigma are also applied in South Sulawesi’s culture. Having no ‘decent’ clothing or limited free time not only hampers the already marginalised citizens to attend wedding parties or village forums but also makes them feel excluded, isolated and shamed. Coming to wedding parties, in fact, to them, is an extremely important opportunity, where they can exercise their cultural rights and socialise with other community members. Further, by not coming to several wedding parties in a row they would increase their sense of lacking as a person and vulnerability, which amplify the sense of deprivation. Marginalised citizens are often absent from village forums due to feelings of shame and feeling incapable of contributing to communal decisions (related to what Guterres meant by ‘mental barrier’). This self-doubt and sense of low worth to the society restrict the marginalised groups from contributing in decision making. This could have negative outcomes for low-income groups as decision-making is dominated by wealthier individuals in the villages.

Shame and stigma are not only preventing the marginalised citizens from accessing their rights thus perpetuating poverty, but also builds the stereotype towards poverty and restricts opportunities. Having low-income is often stigmatised as ‘lazy’ (‘pemalas dia mungkin ji’), or ‘incapable of seizing opportunities’ (‘ndak mau usaha mi’), or some others said, ‘too picky’ (‘pilih-pilih kerja dorang ji’) as if the poor do not have rights to select their jobs based on time, safety and location considerations. Labelling and stigma have reinforced neo-liberalism value in viewing poverty and risks reinforcing stigma in the community.

Just by being poor, marginalised citizens are often demotivated and hesitate to engage in meaningful relationships with community members, which can undermine social cohesion and social inclusion. The social-control mechanisms, such as gendered-social norms, gossip and rumours, also play roles in reinforcing shame, stigma, and humiliation. If the poor cannot reach a certain bar of social expectations, they get penalised by society through gossip and rumours. The fault lines between rich and poor in Lombok quake

Notes from a research trip interrupted by Indonesia’s most deadly earthquake in years.

In many communities, social expectations are gendered – women and girls are imposed with higher social standards to be met and could get a ‘harsher’ social penalty when they fail to meet those. Girls and women are expected to appear and behave in a specific way in the public sphere: to always be friendly, wear modest clothes, be motherly, and be ready to help the community if there are events. If girls and women do not perform these expected norms, there is often gossip and stigma from the community. Boys and men also have social expectations with penalties if they are not reached, but at a lower level compared to girls and women. For instance, if a man could not help his neighbour prepare for a wedding party, the neighbour would not be insulted as they think it’s voluntary for men to help, but they expect women to help – it is almost obligatory for women to help. If women do not help, the community perceives them as lazy or arrogant.

Social media, as the medium for the flow of ideas and values, has also influenced the way social and gender norms are shaped and reinforced, which affect the unwritten rules of the game in society. Especially related to how people should present themselves and behave in the public sphere. Looking at the latest fashion trend in Instagram, and uploading photos to Facebook have raised the bar of unwritten norms of what is aesthetically-pleasing. Especially to women, who get the most incentive (and pressure) to look nice. Finally, being unable to meet this critical bar of social expectations has made the marginalised citizens pay the price: they feel ashamed and have low self-esteem to engage with the community and to access their rights as citizens.

A large part of communities in South Sulawesi practice gendered division of labour. Specifically, in my research with households from the low-income class, women are still responsible for unpaid domestic work and caring for children and the elderly, while men are working in rice paddies or engaging informal/precarious-natured works. Both men and women are in disadvantaged situations, but often women must give more time. For instance, many government social programs aim to empower women and thus set women to be the main participants of the program. The Integrated Villages for Family Planning program (Kampung Integrasi Keluarga Berencana) and Kelompok Usaha Bersama (KUBE) strongly encourages women to ‘do something else’, such as baking or making handcraft and sell it, to achieve the ‘empowerment’ goal. Whilst it generates positive outcomes of acquiring more hands-on skills, it is also increasing women’s tasks and reducing their already limited leisure-time. 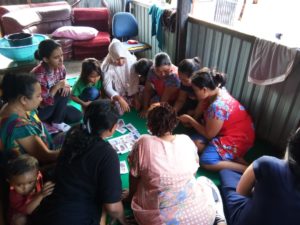 During Focus Group Discussions and interviews with women in urban and peri-rural communities, being unable to participate in or contribute to community-driven or government-led events, could lead to feelings of shame. Some of them decided to take themselves out of the communities as they could not attend or participate in several community activities. The other community members may penalise them by attaching stigma and gossiping and risk further social exclusion.

Without a doubt, income, housing and works are very relevant and essential for the poor, but I want to open a conversation over the non-materialistic aspect of poverty, including shame, stigma, and gendered ‘empowerment’ program. Empowering should be a long-term process and goal, and should aim for balancing power relations, and thus require more than setting women as participants. After all, knowing in more depth would help us to further understand the problem and create a conversation. This would broaden our horizons through addressing the problems of poverty in Indonesia. Lastly, the UN and the Government of Indonesia’s narratives over poverty eradication through the discourse around inclusivity, participatory development, non-discrimination, and leaving nobody behind may have a bumpy road ahead if we are still dealing with the same old problem with the same way of thinking. 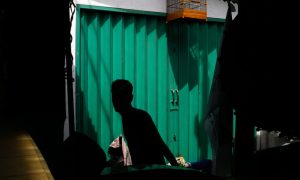 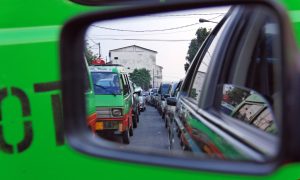 Indonesia’s real infrastructure challenge: getting people out of their cars

Road building is good for the economy overall but does little to solve the congestion that plagues Indonesia’s major provinces.