Over the last month, the United States Secretary of the Navy, Kenneth Braithwaite, made official statements at the Naval Submarine League annual conference and the Senate Armed Services subcommittee proposing the (re)establishment of the First Fleet, formerly operational between January 1947 to February 1973. The reorganisation of the numbered fleets is to improve the posture of the United States Navy at the crossroad between the Indian and Pacific Oceans by forming an ‘agile, mobile, at-sea command’ force capable of deterring and countering Chinese assertive maritime activities.

These statements prompted neither official nor unofficial comments from both the Thai Ministry of Defence and the Royal Thai Navy (RTN). It seems like most naval officers believe the statements are a non-event. It is true that at this early juncture the proposed reorganisation still leaves many unanswered questions and remains by and large far in the distance. But if my reading of the cause of the silence is correct, then the RTN’s no-response response is grounded on an erroneous premise. The re-establishment of the First Fleet holds significant implications for Thailand’s small navy at the strategic and operational levels.

Some analysts, like Blake Herzinger, had an immediate knee-jerk reaction to the statements, stating that this figurative bomb ‘will inevitably cause partners [of the United States] to pull back publicly’. Countries across the region can already be seen on the defensive as a result of Braithwaite’s statements. The Singaporean Ministry of Defence announced, for example, that beyond the request from the United States in 2012 to ‘deploy up to four Littoral Combat Ships on a rotational basis, no further requests or discussions… on additional deployments had taken place’. Individuals in the Indian governmental establishment are said to be concerned with the potential move ‘given that it would act to detract from India’s self-identified position as the preeminent Indian Ocean regional power’ and signal that India is ‘no longer the principal security provider in the region’.

Re-establishment of the First Fleet makes the Indian Ocean Region arguably less stable. As it presently stands, the Indian Navy holds considerable strategic advantages against Chinese naval aggression in the Indian Ocean, given that India holds the interior-lines while China holds the exterior-lines. India seeks to create further leverage against China by enhancing Russia’s operational lines through the Chennai-Vladivostok maritime corridor—a maritime connectivity project between the ports of their respective cities that improves their economic relations and strengthens their bilateral relationship.

The presence of the US navy may actually have the unintended effect of weakening this present leverage by forcing the Chinese and Russian navies to augment their own total numbers and quality of naval assets in the Eastern Indian Ocean towards protecting their novel maritime interests. Braithwaite’s announcement has already received a harsh rebuke from former Chinese government officials, like Song Zhongping, a former instructor with the People’s Liberation Army’s Second Artillery Corps.

Moreover, although there has been noted highs in the past weeks-to-months between the United States and India via the successful completion of the Malabar naval exercise and signing of the third troika of a foundational defence pact—the Basic Exchange and Cooperation Agreement—there remains long-held tensions over the presence of United States personnel on the Island of Diego Garcia. For instance, India voted last year in favour of a non-binding motion submitted by Mauritius at the United Nations General Assembly enabling decolonisation of the island, which was passed overwhelmingly.

The new great game at sea, already existent and prone to accelerate in the Indian Ocean Region following the re-establishment of the First Fleet, will likely result in India further investing in anti-submarine warfare and other defence technologies, like anti-access/area-denial and strategic surveillance technologies across the Andaman and Nicobar Islands to prepare for future challenges on the high-seas.

A less stable Indian Ocean Region concerns Thailand’s small navy owing to its ‘Look West Policy’ and Economic Exclusive Zone in the Andaman Sea. Both commit the RTN to maintaining a relatively peaceful environment in the Eastern Indian Ocean through maritime security and cooperation. The combination of the two factors—decreasing stability and commitment to maintaining a relatively peaceful maritime environment—puts the RTN in a ‘strategic dilemma’. It must either choose to step back from its commitment and watch its influence in the Andaman sea get subverted or, contrarily, affirm its commitment to some degree and get potentially embroiled in a low- to medium-intensity naval conflict.

The theoretical ‘strategic inflection point’ in the Indian Ocean Region that arises from this strategic dilemma not only requires that the RTN revisit the current maritime strategy for its western geopolitical periphery. It also demands a re-evaluation of its stated position on the South China Sea dispute—hitherto viewed at arms-length with just a few short mentions in some governing documents (for example, the 2015–21 National Maritime Security Plan)—because the dispute will certainly be carried over into the Eastern Indian Ocean through Chinese interests in mitigating the ‘Malacca Strait Dilemma’. The RTN’s efforts to manage this strategic inflection point in the next few months-to-years is similar to the situation Vietnam faced decades ago with Chinese maritime aggression in the South China Sea and the contested islands dispute, albeit here with multi-state naval expansionism in the Eastern Indian Ocean and the Andaman and Nicobar Islands.

The second implication: similar to efforts made amid previous strategic inflection points, the RTN will have to modify—in degrees not of kind—its ‘naval force structure,’ though without necessarily having to touch the ‘organisational structure’ of the Royal Thai Fleet’s (RTF) three naval area commands (NACs): Northern Gulf of Thailand (First NAC), Southern Gulf of Thailand (Second NAC) and the Andaman Sea (Third NAC). This means the RTN should look beyond acquiring large, traditional naval assets and accelerate works on foregoing investments like mini-submarines and medium-to-long range mobile cruise missiles, while also developing defensive high-end seabed warfare capabilities (i.e. automated seafloor sensor networks) positioned along the coasts and seafloor of the Andaman Sea.

I have already stated elsewhere my ambivalence about the competence of the RTN’s new leadership and their declared priorities for the upcoming year. Yet modification in the naval force structure remains attainable since the ‘professional academics’ inside the RTN’s education sector have failed thus far to convince the leadership of the need for the naval organisation to shift from ‘threat-based’ to ‘capabilities-based strategic planning’. The principal argument for change is that the threats are too numerous and change too frequent in a multipolar maritime environment. The reinforcement of US Navy assets in the ‘Indo’ part of the Indo-Pacific region coheres with the threat-based strategic planning present inside the RTN’s Operations Department under the assumption that the United States is viewed by the middle ranks of the Royal Thai Armed Forces as the ‘Great Power’ most likely to threaten Thailand.

The re-establishment of the First Fleet remains a far distant event with many details still unknown. Ultimately though, its implications for the Thailand’s small navy at the strategic and operational levels are much more substantive than naval officers currently realise. The potential volatility of the shifting maritime threat environment in the RTN’s near-seas within the coming months-to-year ahead requires that the organisation proactively contemplate making certain structural adjustments by revisiting its strategic position on present and/or future flashpoints and rethinking its naval capabilities. Whether the RTN adopts the right reforms to meet the strategic inflection point noted earlier is yet to be seen, but will partly determine the outcome of its future at sea. 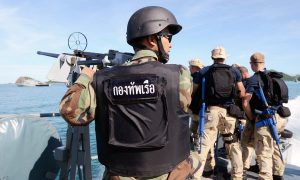 In the wake of the annual military reshuffle, the dominant faction in the Royal Thai Navy is facing a juncture due to two recent corruption scandals.