Data from FORUM-ASIA indicates that three out of ten women in Southeast Asia are experiencing physical and sexual violence.  The pandemic also impacts children’s education, where remote communities lack the resources to access the so-called “school-from-home” initiative. These are serious hindrances to the protection of women and children in Southeast Asia. However, the ASEAN Member States (AMS) have yet to resolve a concrete policy action to tackle these issues during these unprecedented times, despite the establishment of the ASEAN Commission on the Promotion and Protection of the Rights of Women and Children (ACWC) a decade ago.

The idea of creating a body to address this particular issue in the region is indeed a breakthrough for ASEAN. Since its early development, ACWC has strongly encouraged AMS to collaboratively and actively promote and protect the rights of women and children, especially those living in disadvantaged and vulnerable conditions. On the one hand, the general attitude towards the protection of women and children is shown by the ratification of the Convention on the Elimination of All Forms of Discrimination against Women (CEDAW) and the Convention on the Rights of the Child (CRC) by all AMS. On the other hand, given the presence of the “non-interference” principle, ACWC seems unable to formulate a robust regional mechanism to address related issues, particularly gender-based violence.

The risk of exposure to gender-based violence has significantly increased during times of crisis. Although gender-based violence kills more people than armed conflict, is often overlooked by policymakers. In Southeast Asia, gender-based violence is demonstrated by the persecution of the LGBTIQ+ community. The hateful anti-LGBTIQ+  rhetoric poured out by militant Islamists and government officials incites violence from family members and neighbors. This marginalised community is commonly viewed as a moral threat on the basis of their gender or sexual identity. Further, discriminatory laws against gender and sexual minorities are being used as a tool of repression. Evidence can be seen in Indonesia through its 2008 Pornography Law that calls same-sex conduct “deviant-behavior,” a framing used by authorities as a weapon to target LGBTIQ+ people. Hundreds have been arrested under obscenity laws, while hate spin has also become the new norm in Indonesian politics.

It is worth noting that such criminalisation of the LGBTIQ+ community in Indonesia is supported by the legal context (although homosexuality is not illegal) and intertwined with cultural aspects. LGBTIQ+ people in Indonesia are treated as threat to the future of mankind. The evidence is clear in the draft of “Family Resilience Bill” introduced in February 2020. The widely criticised draft bill, which as well as advocating legislation that would constrain women to domestic roles, asserts that the practice of homosexuality is a sexual deviation and the labelled person must submit to the conversion therapy. Although the draft bill has not passed into the legislation, it demonstrates that conservative religious groups are attempting to criminalise  the LGBTIQ+ community. The existence of the LGBTIQ+ community is minimally evident on the surface because they are not socially recognized. Society, especially religious groups that hold traditional values, legitimise perspectives that same-sex intimacy is unnatural and immoral. Being pressured by these social and religious beliefs hinders LGBTIQ+ people from claiming their fundamental right to live peacefully.

Another case of gender-based violence is also demonstrated through the practice of female genital mutilation (FGM), prevalent in some Southeast Asian countries. A recent study claims that FGM is practiced in 90% of the Muslim population across Indonesia and Malaysia. Similar to the LGBTIQ+ case, FGM is strongly linked to cultural beliefs. Women and children are expected to accept FGM as it is culturally associated with the preservation of virginity and enhancement of male sexual pleasure, with no basis in medical practice. On the contrary, FGM can cause infection, loss of sexual pleasure, and worse, infertility. FGM cases are concerning issue where most affected victims experience fear in expressing their concerns, as it would attract FGM proponents’ criticism. The situation is very unfortunate for human rights activism as the higher number of FGM remains latent and undetectable.

These examples clearly show that cultural beliefs are often behind gender-based violence and other forms of gender inequality. This stems from gender norms that are reinforced by the patriarchal expectations embedded within people’s consciousness. Such ideologies often place women in a subordinate roles and constrained positions. They are expected to perform a balancing act, where they should contort themselves into everything society says they should be. However, everything that is constructed both socially and culturally can be deconstructed as well. Therefore, changing cultural attitudes to gender norms is a viable proposal. Albeit it slowly, this can be pursued through education and outreach towards society.

In the ASEAN context, the role of the ACWC is critical to push agendas in protecting the rights of women and children, as well as eradicating cases of GBV in the region. However, several things hinder ACWC from maximizing its efforts in implementing these mandates. The lack of gender-sensitive legislation in force in ASEAN member countries is one of the obstacles to ending gender based violence. However, in some ASEAN countries that have gender equality laws, such as Laos, implementation is still challenging, as there are still people who defy such laws based on their traditional and cultural values. Another concern is the low visibility of ACWC in the region due to the lack of accessible, up to date information online about the Commission. Some country representatives only have social media pages to disseminate information related to ACWC works. Hence, it is not surprising when the progressive role of ACWC is only seen in several countries, such as Indonesia, Thailand, and the Philippines. This is most likely due to limited funding; the ACWC budget allocation has not increased in the ten years since its establishment. Such limited financial support has led to only 25% of the total 48 activities in the second work plan (2016-2020) being completed.

These interrelated barriers eventually have an impact on the low engagement of ACWC with grassroots-level organizations/CSOs. This should be taken seriously since violence prevention is best initiated through the grassroots level. We can easily approach victims and perpetrators to identify their needs through grassroots communities as they are also a part of society. Involving civil society organizations can also bridge advocacy efforts, education, and the distribution of assistance directly to the community.

In the end, eradicating gender based violence is a difficult task requiring community-wide interventions addressing many social and cultural factors. However, it seems that the most essential thing—and perhaps the most difficult—is to raise awareness about gender equality. We need to deconstruct the existing patriarchal culture embedded in society. Otherwise, the government and all related parties who fight for gender equality will likely be hampered. Moreover, Indonesia’s government doesn’t take gender-sensitivity into serious consideration. Patriarchal attitudes are embedded in and institutionalised by the government, especially through the Family Welfare and Empowerment (PKK) organisation that controls women’s roles and capacities, particularly through family planning programs that constrain women’s control over their own bodies and sexuality.

Hence, in the contemporary era, it is essential for governments, together with grassroots communities and academia, to actively educate society through intensive discussion, research, and counseling on this particular issue. In addition, the media also needs to be engaged to help promote the importance of gender equality and the protection of the rights of women, children, and minorities.

Each government must also re-examine the existing state laws and policies related to gender issues. If regulations in force in most ASEAN countries are insufficient to protect the rights of the people equally, more gender-sensitive or gender-responsive policies must be formulated. The provision of criminal sanctions against perpetrators of gender-based violence is also necessary as a deterrent, educative tool and consequence.

Lastly, as ASEAN’s body responsible for bearing innovative strategies to promote and protect the rights of women and children, ACWC needs to enhance its inclusivity in encouraging more policy dialogue among relevant partners. Policy dialogue should emphasise the social and cultural context to reduce violence in diverse settings since ACWC falls within the ASEAN Socio-Cultural Community Blueprint. Other interventions to shift norms and promote gender equality should be imposed at the individual level through group participatory education or communication campaigns targeting men. It is also essential to allocate adequate resources to evidence-based research that can inform legislation, the criminal justice system for perpetrators, and school-based interventions to promote equitable gender attitudes.

More on gender in Southeast Asia 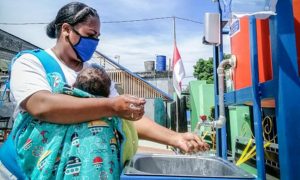