M.R. Priyanandana Rangsit, grand-daughter of Prince Rangsit, has sued a professor and an academic publisher for fifty million baht (over US$1.5m) in the Civil Court in Bangkok. The professor, Dr. Nattapoll Chaiching, who teaches in the Faculty of Humanities and Social Sciences at Suan Sunandha Rajabhat University, is being sued for a mistake in his PhD thesis about Prince Rangsit (1885-1951), a son of King Chulalongkorn and the forefather of the Rangsit lineage. The publisher, Fa Diew Kan (Same Sky Books), is being sued for publishing a book that is based on the thesis, even though the book is a substantial revision of the thesis and does not contain the mentioned mistake. Nattapoll’s PhD advisor, Dr. Kullada Kesboonchu-Mead, is also accused in the case.

Filed on 5 March in the Civil Court in Bangkok, the case is part of a broader pattern of SLAPP (Strategic Lawsuit Against Public Participation) cases in Thailand. According to a report completed by iLaw and the Human Rights Lawyers Association, between 1997 and 2019, 212 SLAPP cases were brought against a range of critics, including political activists and volunteers, human rights defenders, journalists, lawyers, academics, and others.

The SLAPP is in addition to an investigation by Chulalongkorn University (CU) into the professor’s alleged intentional wrongdoing. CU has also censored the thesis—by not allowing the public to access it—since 2019.

Dr. Nattapoll Chaiching completed his PhD in the Faculty of Political Science, Chulalongkorn University in 2009, with a thesis titled “Thai Politics in Phibun’s Government Under the U.S. World Order (1948-1957).” The thesis explores how the U.S. intervened in Thailand during this period by supporting the police and military groups, and supporting the resurgence of the monarchy in Thai politics. Eventually, the intervention led to the 1957 coup by Field Marshal Sarit Thanarat and the establishment of a royalist authoritarian regime in Thailand that lasted into subsequent decades. The thesis was passed with distinction.

The thesis, nevertheless, contains a noted mistake that some (royalist) academics and the Rangsit clan consider seriously damaging to the monarchy. This mistake is the assertion that Prince Rangsit, as the Regent in 1947-1951, interfered with the government by attending a cabinet meeting. This statement was actually false, and occurred due to a misreading by the author.

In 2018, Professor Chaiyan Chaiyapon, a royalist political philosopher also at CU, found the mistake and demanded revision of the dissertation and punishment of Nattapoll for intentionally falsifying the fact in order to tarnish the monarchy. It is alleged that Chaiyan threatened Nattapoll with a criminal lese majeste charge, a serious crime in Thailand that carries a punishment of three-to-fifteen years per count. But Chaiyan has denied this allegation.

After an investigation in 2018, the thesis examination committee and the Faculty of Political Science concluded that the misreading by Nattapoll was unintentional, and that the passage that contains the mistake can be removed without any effect on the argument in that chapter or the thesis as a whole.

To confirm that the mistake was unintentional, nonetheless, Nattapoll requested that the Graduate School of CU allow him to revise his thesis. The request was denied since the thesis had been submitted and approved almost a decade earlier. Following Chaiyan’s relentless demands to the CU administration, however, the Graduate School has prohibited public access to the thesis since 2019. At CU, the university holds the copyright to all theses completed there, although it allows public access to them.

By denying public access to the thesis, Chulalongkorn University has, in practice, censored Dr. Nattapoll’s thesis.

In 2020, Nattapoll published a book titled, The Junta, the Lords, and the Eagle, with the publisher Fa Diew Kan (Same Sky Books). The book was based on his thesis, but contained extensive revision and constituted a significant improvement on the thesis. Notably, the book does not contain the controversial mistake. The main arguments of the book remain the same as the thesis even without any trace of the mistaken fact. This also shows that Nattapoll’s arguments do not hinge on the mistaken fact. The mistake in the thesis was not serious.

The book has sold like hotcakes, by far the best-selling academic book in 2020. Within the context of the youth movement that has been openly critical of the monarchy for the first time in decades, publications in political history that touch upon the monarchy are in high demand. But Nattapoll’s book is special. The public excitement about this book, which is rare in Thailand for an academic publication, must be credited to the excellence of the book.

First, Nattapoll’s thesis and book detail the roles of every political force in Thai politics in the 1950s, a period that has remained understudied. Second, the arguments are supported by a phenomenal amount of evidence, mostly from primary sources, including extensive materials from the US Library of Congress and the British Library. Third, the book’s narrative prose reads exceedingly well; in fact, many readers have said that it reads like a novel or a film script, full of suspense and unexpected turns, despite, or perhaps because, the author lets the facts tell the story. It is a very conventional historical method, but among the best ones we have ever read. Last but most important, it exposes the political role of the “Lord” in a stunning fashion, not only its occasional intervention but particularly its relentless attempts to secure political supremacy, even through a royalist military coup in 1957. The monarchy has been integral to Thailand’s anti-democratic cycle since the end of World War II up to the present. Nattapoll Chaiching’s work is quite original in this regard.

Many readers said that this book caused them to become “disillusioned” (เบิกเนตร) with or “awakened” (ตาสว่าง) from the hypnotic myth pervasive in Thailand that the monarchy is above politics.

The huge success of the book has undoubtedly led to Chaiyan’s attempt again to reduce the impact of the book. First, he spread the false allegation via social media that the book contains a piece of intentionally false information—the misreading discussed above. This attempt to discredit the book and the author failed after the publisher explicitly explained that the alleged false information is not in the book. Further, the book is much improved from the thesis, and while both advance the same arguments, they are not the same.

But the royalists have insisted that the author must be punished for his intention to tarnish the monarchy in his thesis. They want Nattapoll’s PhD degree revoked. Given this pressure and despite the thesis already being censored through the denial of public access to it, in February 2021 CU set up a special committee to investigate whether Nattapoll intended the mistake, and whether the controversial misreading, or any trace of it, remain in the book. The investigation is under way.

Then, on March 9, 2021, reportedly encouraged by Chaiyan, the Rangsit royal clan took civil legal action against Nattapoll and his publisher. It is a clear SLAPP (Strategic Lawsuit Against Public Participation) by the royalists. SLAPP cases are frequently used by the powerful to silence dissenting voices in Thailand. This latest SLAPP targets academics and the academy.

Even before the latest investigation and the SLAPP, the censorship by CU and the relentless allegation of wrongdoing in the thesis and the book have had chilling effects. Think about a young researcher in the future who wants to study the monarchy—what should they do? Will a professor agree to supervise a research that touches on the monarchy? Thailand could be flooded with the writings about the monarchy in superlative, hyper-royalist tones in the future, as it has been in the past. This is not scholarship. Think about the effects on the entire academy and field of higher education, as well as on all pursuit of knowledge inside and outside the academy, and on the next generations of Thais. 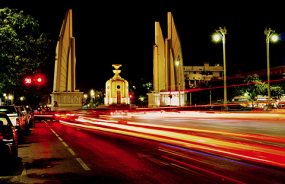 Whither academic freedom in Thailand?

Neither Chaiyan, nor any royalist scholar, has produced a scholarly work refuting Nattapoll’s work. Instead, they opt for suppressive measures – censorship, punishment of the author, and SLAPP.

Instead of standing firm on academic freedom and professionalism, CU’s actions indicate that they either gave in to the pressure or collaborated with the attempt to suppress knowledge unflattering to the powerful. If the latter is true, Nattapoll’s thesis and book do not represent the first case of Thai universities actively going after students or professors who are critical of the authoritarian government or the monarchy.

The case is not an isolated one within the context of the rapidly-deteriorating academic freedom in the country. Many Thai institutions overtly support the right-wing protests that led to the downfall of democratic government with the 22 May 2014 coup. Most do not support, but instead obstruct, the youth movement that has called for the end of authoritarian rule and the reform of the monarchy since mid-2020. A few, such as Chiang Mai University, have even aided in reporting their students to the police.

The international academic community must send the message to Thai universities, particularly CU, to stop these inexcusable actions immediately. CU and every Thai institution that cares for their rankings should be notified that their rankings will drop with such Orwellian actions.

Such actions are harmful to Thai academy, their institutions, and to Thai people. 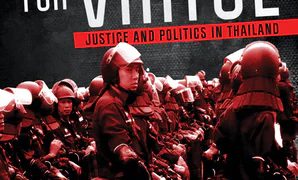 New Books on Southeast Asia: Duncan McCargo on “Fighting for Virtue: Justice and Politics in Thailand”

Nick Cheesman talks to Duncan McCargo about his new book on the "hyperlegalism" recently on display in Thailand's courts. 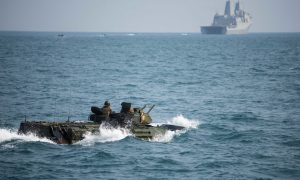