This article is the first to be published under New Mandala’s newly established collaboration with Academia.SG. You can read more about this partnership and Academia.SG here.

Many governments around the world are now considering the pros and cons of using smartphones and wearable devices for combating COVID-19 through digital contact tracing. Singapore was an early developer and adopter of tracing technology, introducing the TraceTogether app on March 20. But downloads have stagnated after the initial scramble when 1.1 million users signed on. Experts suggest that over 60% of Singapore’s population need to use the app for it to be effective. This would require another 2 million downloads.

One proposed solution is to make the app mandatory. The tech editor of the Straits Times Irene Tham believes this is now the course Singapore should follow, suggesting that we face a stark choice: either more app downloads or more lockdown. “Keep your privacy and the partial shutdown is prolonged or lose it and you may see punishing bans on social gatherings and non-essential businesses be lifted sooner.”

But will making the app mandatory really help?

The answer is probably not. For one thing, the app, mandatory or not, may not be necessary. The past three months have shown that Singapore is perfectly capable of minimising infections of COVID-19 in the community at large, with the exception of migrant worker dormitories where outbreaks are still spreading. Existing, human-led, contact tracing methods that glean data from CCTV and other sources, aggressive testing, careful interviewing, and gradual social distancing measures have succeeded in lowering community transmission numbers, and minimising mortality, all without TraceTogether. These efforts made Singapore an early example of containment done right, especially at a time when infection numbers and deaths were mounting and overwhelming hospitals in places like Italy and the United States.

Those in favor of the app have argued that the app will help mitigate the recent rise of infections in Singapore, which are in migrant worker dormitories. This seems the place where TraceTogether is least likely to help.

Living in dormitories on the edges of the island and transported to and from work and dorm through open-air lorries, migrant workers are already subject to social and geographic exclusion, a phenomenon that is unlikely to change soon. Moreover, migrant workers are already heavily surveilled through checkpoints, by CCTV when on the job and at work, and by extra plainclothes police officers circulating in areas they frequent. Although cosmopolitan in their own right, they are still kept largely isolated from the Singaporean “community.” Managing health within migrant worker communities requires not TraceTogether but renovated infrastructure and policy The government is already working on such solutions.

TraceTogether would be effective in tracing those who are not only mobile but also encounter many people. These are the individuals who can travel the world for leisure and business, and Singaporeans who travel within the city, whether by choice or necessity. This does not fit the description of migrant workers.

More pertinently, a mandatory app might also be of more harm than help. Just because we have the technological capacity, does that mean we need to use it?

TraceTogether fits snugly into Singapore’s vision of a Smart Nation with sensors for “Everyone, Everything, Everywhere, All the Time”. Already, data is used to streamline services and create conveniences for citizens, such as knowing property prices, the crowds at the gym, or finding the nearest taxi stand. Some degree of privacy has already been surrendered in exchange for benefits and for the social good. How is TraceTogether any different?

To stave off privacy concerns, GovTech developed and implemented new technology for TraceTogether that does not use locational data (like a phone’s GPS), but instead tracks who a user comes into contact with through Bluetooth. The “social” data the app gathers add yet another, more intimate, layer to what the government can already know about us.

The low uptake of TraceTogether is likely due to a combination of factors: some people don’t know about the app, others just may not think it will be effective or important enough to use. There is certainly some fraction of Singaporeans who remain worried about data breaches revealing private information. Others are also concerned about what the government itself will do with the data. Will these data only be used for contact tracing, as the government says? Will agencies other than the Ministry of Health eventually have access to them? Will the app only collect the data it promises to collect? While the government has tried to allay these fears, the anxiety is still alive and well in some citizens’ minds. For TraceTogether, or any other mandatory digitized contact tracing platform to work, the government needs to actively build and reinforce public trust in its institutions.

Government collaboration with corporations won’t necessarily help. Apple and Google are developing more privacy-preserving systems of contact tracing built into phone operating systems. But local laws make it far from certain that individuals will actually be able to opt out. It is also unclear to whom the data will belong.

But trusting the government or corporations is not the only form of trust at stake. Also critical is how much citizens trust one another. The COVID-19 pandemic has seeded a maelstrom of everyday rumors, conflicting anecdotes and ideas about the causes and remedies for the disease. In this climate, it is difficult to know who or what to trust. A technological solution seems like an easy fix.

But without trust between citizens, Singapore may be headed down the path towards even more privacy-invasive regimes like China’s “social credit system”—when no-one can trust anyone else, and all-seeing technological solutions become the only answer to brokering social trust. This should not have to be the path Singapore follows.

South Korea is an example of a nation in which contact tracing has been enforced using CCTV footage, credit cards, and phone data. This has aided significantly in their successful control of the virus.

But this success seems to have come at a significant cost to individuals who have been shamed, outed, doxed and otherwise harassed. In the long term, the costs to the fabric of social trust in South Korea may be high. There have already been examples of fraudsters trying to take advantage of the panic – one man threatened to report a Seoul restaurant as a virus hotspot unless they paid him. As the pandemic continues (or when the next pandemic strikes) Koreans are likely to be leerier of sharing personal information with acquaintances, strangers or the government. 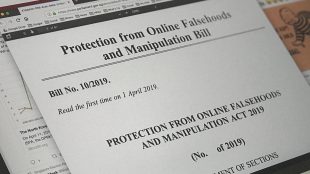 As Singapore’s “circuit breaker” eases, rapid contact tracing will become even more critical. Technology undoubtedly has a role to play in this. But the technologies that are the most effective will be the ones that are successful in gaining and sustaining public trust. One way forward would be to redesign TraceTogether as a completely decentralized, peer-to-peer contact tracing system, removing the Ministry of Health from the loop. Developers worldwide are already constructing protocols with distributed hash table systems and blockchain to prevent the exploitation of loopholes in centralized systems. We’re only beginning to see the possibilities of the kinds of technologies applied to pandemic management.

Other apps such as SpaceOut and SafeDistance, which use aggregated and non-personalized data, can also be effective “nudges” towards good pandemic behaviour. Providing individuals with the information they need to act in “safe” ways is likely to be more effective than mandatory monitoring.

Contact tracing requires everyone’s cooperation. The government can make individuals download the app, but it’s harder to force them to use it. For those who remain suspicious there are many ways to thwart TraceTogether or other wearable devices: turn Bluetooth off, use multiple phones, turn phones off, or simply leave it at home.

In the end, mandating such devices and apps means concurrently expanding the legal and punitive powers of the government to ensure rules are followed, as well as developing the technological sophistication to track rule-breakers accurately. But as several studies of other wearable surveillance devices like ankle monitors show, they can compound social stigma, malfunction, and simply do not achieve the desired ends.

With or without the app, contact tracing won’t work if people are fearful of sharing personal information. Technological solutions like TraceTogether will only work effectively to protect us from this and future pandemics when people believe it’s there to help them. And this requires trust, not obligation.