Studies that look at Sino-Indonesian relations have largely revolved around two topics. The first concerns the rise of China and its consequences for Indonesia. Observers, for example, have discussed the importance of closer Indonesia-India-Australia cooperation for maintaining regional stability, Indonesia’s economic dependence on China, and the centrality of ASEAN to managing a collective response from Southeast Asian countries.

The second topic focusses on Chinese Indonesians themselves. Works on this topic have looked at the persistence of anti-Chinese sentiment, how this sentiment hinders closer ties between China and Indonesia, or how Beijing responds to threats against Chinese diaspora. Works concerning Chinese Indonesians and their place in Indonesian society have become even more important after the religiously and racially charged 2017 Jakarta gubernatorial election.

These two topics are undoubtedly important but they are disconnected. We know a lot about China’s rising importance in the world and to Indonesia specifically. We also have extensive knowledge about discrimination faced by Chinese Indonesians. But how are these two related?

Rather than examining how anti-Chinese sentiment in Indonesia hinders Sino-Indonesian cooperation as most existing studies have done, we are looking at the opposite. Do China’s domestic and foreign policy actions have consequences for Chinese Indonesians?

We employed an experimental design embedded in a nationally representative survey of Indonesian voters. A total of 2,020 respondents were interviewed in January 2020 by the pollster Indikator Politik Indonesia.

Figure 1 presents the wording for each of the treatment groups, along with questions regarding stereotypes towards ethnic Chinese whose answers were our dependent variables. These questions on stereotypes were adapted from a recent survey by the ISEAS Yusof Ishak Institute. More details of the analysis can be found on this blog post. For historical, socio-economic, and political reasons, Chinese Indonesians have experienced prejudice and discrimination in their own country. The glass-half-empty perspective presented by our study is that the prejudice is made even more complicated by foreign factors. China’s domestic and foreign policy actions prove to have indirect consequences on Chinese Indonesians. To the extent that an action by China is perceived negatively by the Indonesian public, Chinese Indonesians likely would be collateral damage.

At the same time, the glass is also half full. The effects documented here are not direct effects. Merely learning about China’s actions does not directly affect existing prejudice against Chinese Indonesians. The actions have to be contextualised against the benefits that Indonesia stands to gain from close China-Indonesia relations. This suggests that there is an opportunity to leverage Indonesia-China economic ties to improve Indonesians’ attitudes toward Chinese Indonesians.

Our study, unfortunately, is not equipped to scrutinise what types of benefits were in respondents’ minds when they thought about China-Indonesia relations. Economic benefits are a likely candidate. After all, we do see that the investment treatment led to higher perceived benefits. But it is also possible that respondents conceptualised benefits more abstractly, such as in terms of Indonesia’s stature in the region or in the world more generally. Other scholars may want to dig deeper into this question in a future study.

To this end, research on immigration in Western countries offers two key points of note. First, while people care deeply about themselves, they care too about the fate of their country. This means that information disseminated by the Indonesian state about the benefits of Indonesia-China cooperation must focus not only on its effects on the lives of average Indonesians, but also on its impacts on Indonesia as a whole.

Second, while people want to have food on the table, they also value more abstract concepts such as national identity and norms. This means that the Indonesian government should not frame Indonesia-China relations exclusively on economic terms. The government should engage with the issue of how these relations bear upon national identity and while doing so, communicate that “Chineseness” does not mean threat.

Overcoming prejudice is never-ending work, and even more so when that prejudice was at some point institutionalised by the state, as in the case of Chinese Indonesians. But perhaps there has not been a better, and more pressing, time to take up that challenge than today. China’s growing importance in the world’s stage, if played right by Indonesia and China itself, can serve as a vehicle not only for boosting Indonesia’s economic development but also for improving Indonesians’ attitudes toward Chinese Indonesians. 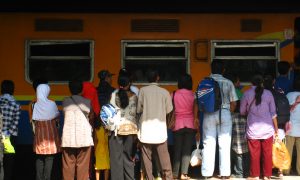