Before 2011, when political reforms started by Myanmar’s generals prompted a switch in Western policy, the country occupied the same berth in global politics as North Korea. Both were outliers, not only in the depth of their tyranny and isolation, but in the immiseration of their people while the countries around them, in East and Southeast Asia, enjoyed decades of record growth and closer integration. But now, as Abrahamian writes in Divergent Paths, “one pariah remains.” Given recent events in Myanmar, this claim looks wobbly. The military’s scorched-earth expulsion of close to 700,000 Rohingya Muslims from Rakhine State into Bangladesh has invited charges of ethnic cleansing from the U.S., the U.K. and the U.N. These were the same partners Myanmar’s generals had hoped to woo back in order to pre-empt a slide into crippling dependency on China (a fate that has fully befallen North Korea.)

Yet, despite firm language on human rights and the sanctioning of an army commander who’d already been rotated from Rakhine, Western nations have not let go of an engagement policy pursued diligently since 2012, when the first trade and investment sanctions were dropped. This policy passed an apparent point-of-no-return with the lifting of remaining U.S. sanctions (beyond those on arms deals and drug kingpins) in 2016.

With blanket denials of atrocities and the continued obstruction of independent media and aid groups from freely accessing northern Rakhine, Myanmar’s diplomatic conduct has been an extraordinary exercise in self harm. It has focused on rallying domestic support at the expense of international credibility. Nonetheless, Yangon’s Western embassies continue to encourage investment from compatriots and channel tens of millions of dollars in development aid to assist everything from education to peace building.

Meanwhile, Myanmar’s economy is growing handsomely, though below initial expectations, and its integration with the global economy and financial system continues slowly, if surely—a far-fetched dream for North Korea, which, because of sanctions, now depends on shady brokers based in China for nearly all outside transactions.

Notwithstanding abuses in Rakhine and other conflict areas, Abrahamian writes, “Myanmar has been able to make a remarkable transition to a more open and globally integrated society, while North Korea remains an outlier, unable to come in from the cold.”

Recent weeks have seen Korean diplomacy flip. The Panmunjeom Declaration issued at an inter-Korean summit in April foresees a “nuclear-free Korean Peninsula” and a “swift end to the Cold War relic of longstanding division.” U.S. President Donald Trump hopes to build momentum at a meeting with North Korea’s Kim Jong-un in Singapore in June. But the Declaration recapitulates the language of previous broken deals, and failure to meet overheated expectations could quickly put relations back on a war footing.

Some North Korea watchers point impatiently to dramatic shifts in the country’s economy, towards greater de facto private ownership and market exchange, which now serves most people’s daily needs. Greater economic freedoms, empowering individuals, could snowball into civil and political freedoms—particularly when market reforms have been accompanied by a growing infiltration of outside media. A study mentioned in the book found that “half of respondents had seen foreign DVDs.”

But the same assumption has been projected onto China, forlornly, for several decades. Abrahamian considers that China’s blend of capitalism and one-party rule presents a more likely future for North Korea, should it survive its nuclear standoff with the U.S. as a sovereign country able to trade with whom it pleases.

In a chapter of “Propagation and Control,” Abrahamian paints the full, lurid extent of the North Korean regime’s hold over the lives, thoughts, and movements of its 25 million subjects:

Outside of a tiny circle, there’s no Internet; any form of association beyond the state is banned; schools are sites of intense indoctrination into Juche, the state creed, “a mix of socialism, race-based nationalism and isolationist corporatism packaged in the world’s most intense cult of personality”; and dissident thoughts cannot be expressed, even among friends and family, without risking confinement in a brutal gulag system where 80-120,000 people are estimated to languish for “political” crimes.

By almost any measure, the people of North Korea are the least free in the world. Myanmar, however, now sits somewhere on par with the other nominal democracies of Southeast Asia—plural, sometimes lively, but with red lines for dissent and near-perfect impunity for those with real power and money.

Why this divergence between the two? Why did Myanmar concede to demands at home and abroad for multi-party democracy and greater freedoms—even if only partially granted—and so re-join the global economy, while North Korea has doggedly pursed a goal, nuclear weaponry, which drives its own isolation, at tremendous cost to its people?

Abrahamian approaches his subject with an International Relations lens that principally views states as rational actors, reviewing a menu of strategic options before acting to further their reach and enhance their security. The kleptocracy of venal and protected elites—exemplified by Myanmar’s jade mining industry, exposed as a $30-billion-a-year “natural resource heist” by campaign group Global Witness—and the frenzied whims of dictators surrounded by terrified yes-men, find less room in his analysis.

But the assumption of reasoned, security-minded leaders lends to a cogent and convincing explanation of how democratic change can, or cannot, happen in states locked in cycles of repression, violence, and isolation. It deserves to be read by anyone interested in democratisation and authoritarian resilience. Abrahamian’s deft, accessible writing style, and his efficient march through decades of history and the workings of complex, little-understood societies, will make it appealing to other readers, too.

Abrahamian gives a fairly straightforward answer to his central question. Myanmar’s core security threat—the fracturing of the Union, or at least an ethnically and religiously chauvinist version of it, by more than a dozen ethnic-based insurgencies—could be contained before turning to the reason for the country’s isolation, the suppression of the democratic opposition and the detention of its leader, Aung San Suu Kyi.

North Korea, however, faces what Myanmar’s generals would term an “external destructive element,” namely, “a hostile superpower on its doorstep”—the U.S., which a North Korean might say is “occupying half our country.”

With a long-distance view of American military adventurism over the past 15 years, in which Saddam Hussein was hung before acquiring any Weapons of Mass Destruction and Muammar Gaddafi was sodomised with a bayonet after bartering away his nuclear programme, “the North Korean leadership views its nuclear program as absolutely essential to its survival as a class and to the survival of the [North Korean] state.”

It is North Korea’s nuclear and missile tests, not its atrocious human rights record, that has spurred sanctions from the U.N., the U.S. and its allies. The more it is sanctioned and vilified, the more threatened its leaders feel, and the more determined they are to reach a goal—a nuclear-topped missile capable of striking the U.S. homeland—that would make the current level of pressure untenable. The cycle repeats itself.

Myanmar’s junta took their time before granting the limited freedoms seen today. After scuppering a transition to multi-party democracy in 1990, when Aung San Suu Kyi’s National League for Democracy swept elections, the junta ramped up military spending and redoubled efforts to crush armed rebellions that had rumbled for half a century.

Buoyed by the collapse of a protracted communist insurgency in 1989, the Myanmar army scored a string of victories against armies representing various ethnic minorities. Although it was unable to fully destroy any of them, it forced peace treaties on key groups that penned them into remote borderlands or bought off their leaders with lucrative trading and natural resource concessions. They continued to wage brutal campaigns against the Shan and Karen, but these groups were severely on the back foot—as most remain today, including the Kachin, now in active conflict.

The establishment of Naypyidaw in 2005 shored up the military state. The new capital was more easily defended from foreign invasion than the port city of Yangon, closer to internal zones of conflict, and had a new defence infrastructure that included a network of underground tunnels and bunkers (built, incidentally, under North Korean supervision).

This put the junta in a position, argues Abrahamian, where they could liberalise politics and achieve a rapprochement with the West, without risking break-up of the “Union.”

Ethnic minority groups and their advocates have been painfully aware that the military occupation of their homelands, and linked abuses, were always a distant second in the West’s rationale for sanctions, behind the fate of Aung San Suu Kyi and her party. Recent political and economic reforms have proceeded in tandem with increased offences against armed groups in Kachin and Shan states, with unprecedented firepower.

Although many pages are dedicated to past Western policy, the book concludes with few detailed recommendations. For Myanmar, Abrahamian suggests staying the course: “strong engagement on governance and civil society issues,” while avoiding sanctions. “It is difficult to see,” he writes, “how severing the lines of communication and exchange with the men prosecuting wars and violence will solve anything.”

This won’t please those outraged by the staggering impunity that allows Myanmar’s military to commit the same abuses, year after year, against different minority groups. But with the Rakhine crisis, the military has brought onside much of the public, who would see sanctions as the deliberate bullying of a poor, misunderstood country.

However, over the last six years, there’s been no shortage of foreign “engagement” of the kind desired. With the disbursal of donor grants, a whole industry of local NGOs has sprung up to conduct programmes on civic issues. When the Rohingya crisis spiralled in August last year, most remained silent or joined the hateful clamour. 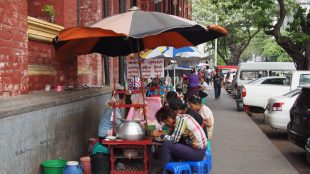 For North Korea, Abrahamian recommends the U.S. and its allies preserve a robust military deterrence while recognising that a sanctions-driven strategy to stop the country going nuclear has failed. Although “it would be harder now than ever before to successfully negotiate a compromise,” the U.S. may ultimately have to accept a freeze, rather than a dismantling, of North Korea’s nuclear programme as the price of peace.

Hawks won’t be convinced. North Korean cheating on past deals and nuclear inspections is legendary. Would any compromise by the regime be another attempt to buy time? Possibly, Abrahamian acknowledges, but with “13,000 pieces of artillery and short-range rockets mostly within range of Seoul,” war is not a viable option.

Overall, the book is a plea to recognise unsavoury regimes less as outposts of tyranny and more as rational actors, whose own assessment of their country’s security predicament, however skewed, must be taken into account if the international community is serious about coaxing positive change. 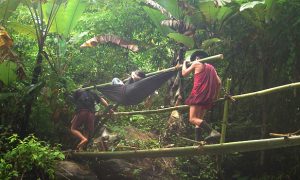