It has been almost 22 years since the toppling of the New Order in 1998, when mass demonstrations demanded the political transition to democracy. Although the country has seen improvements, as reflected in the country’s status as a ‘free country’ by Freedom House from 2006 to 2013, the country’s index of democracy has been demoted to ‘partly free’ from 2014 until today. Signs point towards a growing democratic culture from below in Indonesia, but unfortunately it is being stifled by the country’s own government.

The emphasis on elections has often been used to praise the country’s democratic progress and resilience, especially by government officials. The recent divisive 2019 presidential and legislative elections, as well as the campaigns prior to the election day, have been regarded as a test for the country’s democracy. The 80% voter turnout and relatively calm acceptance of the election results were applauded and emphasised to argue that Indonesia is heading towards democratic consolidation.

However there has been substantial critique on the emphasis on elections as an indicator of a successful democracy. An element that arguably warrants more emphasis is a country’s democratic culture, which refers to the awareness and preference for democracy and its principles, as well as habituation to actively participate in politics, especially among ‘ordinary citizens.’

Another indicator that democratic culture from below in Indonesia is heading in a positive direction is the increasing use of the internet to access information on politics, especially among youth. A survey by Indikator Politik Indonesia shows that the number of searches for political news on the internet has tripled in the past four years, while Lembaga Ilmu Pengetahuan Indonesia (LIPI – Scientific Institute of Indonesia) found that 60.6% of people born in 1995-2005—also known as Gen Z—access information on politics through social media. Although the use of internet mainly reflects a shift from conventional media, people’s access to the internet also signals higher participation in political discourse.

Online platforms, including social media, digital art, memes and petitions act as open channels for political discourse, which has previously been almost exclusively available to politicians and academicians. The use of the hashtags #ReformasiDikorupsi, #HidupMahasiswa, #TolakRKUHP, #SenayanMemanggil, and #GejayanMemanggil are several examples of the rise of social media as an open political space in Indonesia. 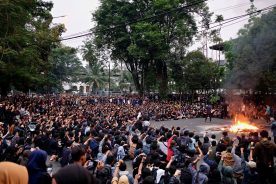 Rising awareness of democratic principles was also reflected in the large number of students who joined the late September 2019 mass demonstrations. Democratic issues such as individual freedom, expectations and transparency in policy making, and gender equality were at the center of their demands. These demonstrations were different from the mass protests that led to the fall of Soeharto in 1998; although the 1998 protests demanded democratization, they stemmed from immense economic dissatisfaction. Recent developments of democratic culture show that democratic rights are regarded as important and the government’s evident attempts to only focus on the economy are not sufficient to cater to these social grievances.

Ideally, these developments should lead to a more participatory and representative form of politics. However, the progress of citizen-led democratic culture, particularly citizens’ critiques of the government, have not received a positive response from the Indonesian government. During the first 100 days of Jokowi’s second term alone, the Commission for Missing Persons and Victims of Violence (KontraS) reported 49 cases of violations against freedom of expression. Repressions on freedom of speech are often based on charges of defamation and treason, with many of them linked to provisions in the law on electronic information and transactions or Undang-Undang tentang Informasi dan Transaksi Elektronik (UU ITE).

In 2014-2019, UU ITE has been linked to 233 cases—which tripled from 74 cases in 2009-2014. Certain provisions in the law are vague, allowing them to be interpreted openly. Among the most commonly used provisions to charge and limit expressions on the internet are Article 27 Clause No. 1 and 3, Article 28, and Article 29. The provisions outlaw the distribution of content or information deemed to be immoral, defamatory, false information, hate speech, intimidation and/or incitement of violence, respectively. The term ‘hate speech’ has often been interpreted by the police to include hostile expression against public officials and institutions. In recent years, the law has increasingly targeted activists—especially those advocating for human rights and environmental protection—members of labor unions, and academicians. Journalists are also not spared from the law despite the formal recognition of freedom of the press. The arrest of Muhammad Asrul from Berita.news for alleged defamation is only one example of this constraint.

The lack of protection for freedom of expression has resulted in civic discomfort, if not fear. LSI’s survey in May-June 2019 showed that 43% respondents do not feel safe to voice their opinions, especially those pertaining to politics. A survey conducted by Indonesia Youth IGF, SAFEnet, and Pamflet Generasi in September-October 2019 revealed that 56% of respondents do not think they can freely express themselves on the internet.

When critics are not met with detention, the government often resort to dismissal. The government is quick to defend themselves from criticism and deny that certain problems exist. Several issues that the government has tried to deny, or at least neutralize, are the violence happening in Papua, violation of human rights, and the persistence of racial and religious intolerance. Joko “Jokowi” Widodo’s recent statement on the BBC about intolerance in Indonesia—’Indonesians by DNA are tolerant and moderate, what is there to worry about?’ —was a clear but feeble attempt to paint the country’s social-political context as inherently harmonious and failed to address grievances pertaining to racial and religious intolerance. Last November, LSI released a survey that showed 53% of Muslims—the majority of Indonesians—object to the construction of non-Muslim houses of worship in their area. From the 31 cases of intolerance in the past year, religious intolerance sits at the top of the list. Dismissal of these issues impedes the search for concrete, structural solutions.

A similarly paternalistic attitude could be seen in official responses to the September 2019 protests and concerns about the Omnibus bill. The responses usually involve assurance that the government does not intend to harm citizens and will always focus on what is beneficial for the public. Jokowi’s recent order to involve the State Intelligence Agency (BIN) and the police in approaching organizations who reject the Omnibus bill is also questionable, as it may lead to intimidation rather than constructive discussion on the bill. The lack of preliminary socialization and public consultation on contested bills highlights the narrative that the government does not regard transparency and public demands in policy-making of high importance.

The Indonesian government’s approach limits political participation to voting in elections and, to a certain extent, forming and joining political parties and organizations, which are also often met with constraints. Opinion from the grassroots, especially those that express discontent and doubt have little influence on policy-making, meaning policies are unlikely to favour the ‘common people.’

It’s imperative that the Indonesian government moves to accommodate positive steps towards a more robust democratic culture, shifting its focus away from electoral matters to look to more substantial aspects of democracy.  It could start by welcoming criticism instead of responding with repression and dismissal. The revision of UU ITE, which has been known to limit democratic rights, should also be prioritised, with focus on freedom of expression.

The Indonesian government must also open up more inclusive channels to welcome public opinions and demands. Socialization of new bills and amendments should not be limited to academia or particular mass organizations, but also include the general public. This can be achieved by utilising digital platforms to achieve wider outreach. This step would be a significant part of the fulfillment of citizens’ rights to access full information pertaining to public policy, as stipulated in Law No. 12/2011 and Law No. 14/2008.

Currently, the government has the momentum to support the building of the country’s democratic culture. The recently disclosed Omnibus bill has drawn backlash from various segments of society, criticised for potentially hurting workers and exacerbating environmental degradation, while its drafting process has been condemned for a lack of public consultation. To date, the Omnibus bill has been passed onto the legislature, where it will be further discussed and potentially authorized. While the legislature is in recess, legislators should hold hearings in their constituencies and open communication channels to criticisms and expectations for the bill. Without concrete actions, the government’s claims that they support public participation in policymaking will be mere rhetoric. From stagnation to regression? Indonesian democracy after twenty years 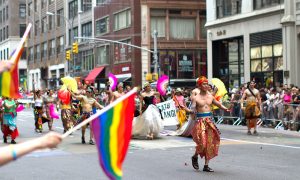