The 2021 ANU Myanmar Update was held in Canberra 15-17 July. Dr Charlotte Galloway, former director of the ANU Myanmar Research Centre and a co-convenor of this year’s update writes on this year’s Update, which has taken place during what is a turbulent chapter in Myanmar’s history.

Reflecting on the conference I could not help but contrast this with the 2019 conference which had the theme of ‘Living with Myanmar’ and marked the 20th anniversary of the Update. We had more attendees, and more Myanmar speakers than ever before. There was wide ranging discussion on Myanmar’s achievements and persisting difficulties, all addressed with an optimistic outlook for change by a diverse range of presenters from government, higher education institutions, NGOs and civil society organisations. Myanmar’s research capacity was on an upward trajectory and we all looked forward to the 2021 Update, never predicting the current situation.

COVID-19 proved the first challenge. I last visited Myanmar in February 2020, returning to Australia just as the world was closing to international travel. I was working on an international collaborative heritage project at Bagan which was first suspended due to COVID-19, and has since been terminated due to the coup. I know many colleagues share similar experiences of now-cancelled research projects, and we wonder when, and if, we will be able to resume our Myanmar-based research.

As we prepared for this conference, Myanmar and COVID-19 became a clear theme, even overshadowing the 2020 November elections. However, the 2021 February 1 military coup changed everything. Many of our Myanmar colleagues withdrew their papers, some for security reasons and others simply because there were other urgent priorities. As convenors, we appreciated that this Update needed to include the expected academic research content, a hallmark of the updates, but it was also imperative to enable attendees to hear perspectives from our Myanmar colleagues and the most up to date commentary possible. To that end the Update shifted from its usual format and included, at the end of each day, more informal presentations from well-known Myanmar nationals. Khin Zaw Win (Director of Tampadipa Institute, Yangon), Lian Hmung Sakhong (Union Minister, National Unity Government) and Swe Win (Editor-in-Chief Myanmar Now) brought to the conference their current perspectives on Myanmar, and their contributions to the Update allowed us to share in their very real experiences.

The keynote address from Professor Yanghee Lee (former UN Special Rapporteur on Human Rights in Myanmar) highlighted a theme that recurred throughout the conference regarding Myanmar’s military, the Tatmadaw, namely that it has never been suppressed, even over the last decade. As Khin Zaw Win remarked, the bedrock hasn’t changed. And strategies to move forward and create a stable form of democratic government that is appropriate for Myanmar are complex and daunting.

The role of international actors was raised by many speakers and through the Q&A sessions, with no clear consensus for effective and immediate actions. Nicholas Coppel, former Australian Ambassador to Myanmar, gave a concise summary of various UN regulations and guidelines that brought home how difficult it is for foreign governments to take action in another country’s crisis.

Another theme that came through strongly was the ongoing division between ethnic groups. Issues of identity were prominent at the 2019 Myanmar Update, and remain. Even at this time of crisis there is no definitive “them and us”, with some ethnic armed groups not speaking out openly against the military coup. This gave us some understanding of the truly complex and deep-seated issues that still persist in Myanmar.

While it appears that the military has not changed much over the last decade, the country and its people certainly have.

I was interested to hear from Lian Sakhong that the National Unity Government’s plan for a draft constitution is based on input from all ethnic regions, and that it would refer to a secular state. I consider this a positive approach. A new constitution that has widespread popular support is essential to the long-term stability of Myanmar.

However, achieving this is likely to be very problematic. For whatever model of federalism or democracy Myanmar chooses, central to success is compromise and negotiation. It is simply impossible to give all people everything that they want, especially in a such an ethnically and religiously complex environment. Decisions must be made about what is critical to allow people to retain ethnic identity, culture and values and what can be shared aspirations. Only then will the bedrock be changed.

It was very encouraging to hear from those presenters who were sharing recent Myanmar-based research, particularly in relation to COVID-19 and its impact. While Myanmar speakers were few, for the aforementioned reasons, Myanmar researchers were able to be represented through presentations given by their project partners. I know I am not alone in saying I am finding it difficult to sit and write up my Myanmar research right now. Quite frankly it seems at times irrelevant to what our friends and colleagues in Myanmar are facing. Yet, it is so important to persist. The fine-grained research does exist to inform policy and strategies. Linda Calabrese’s presentation offered a “building back better” scenario, and other speakers today have presented hard data that can be used to develop other “building back better” scenarios, anticipating Myanmar’s future recovery.  As a network of scholars at this time we should be doing what we can with our academic knowledge to inform our own governments and decision-makers about what is happening. And we owe it to those whom we have worked with in Myanmar to do what we can to keep their situation in the public eye.

The conference theme moved from COVID-19 to the coup and is now arguably back to COVID. In the last 2 days of the conference Facebook posts from Myanmar friends shifted almost entirely to COVID concerns: the lack of oxygen, and the illness and deaths of their family and friends. This situation is out of control. It was suggested by one speaker that COVID may give the Tatmadaw and international community an opportunity to engage through provision of humanitarian aid, but even if this happens, it will likely be too little too late. The images and videos show what we already know—the health care system has collapsed. The Tatmadaw will be equally affected—soldiers and their families are all subject to the same risks from COVID-19 and this spiralling outbreak may well change the course of the coup.

Only time will tell what Myanmar’s future will be. As Morten Pedersen reiterated yesterday, we would do well to know Myanmar’s history before considering how to address the current situation. There are so many complex threads that need attention and resolution, and many are, unfortunately, well known: the random arrests of people including children, a tactic that has been used by the military before to instil fear in the population; a blatant disregard of human rights; a judicial system that has no credibility; a collapsing economy and a breakdown of the education system which will see yet another generation of Myanmar students disadvantaged. These are just a few examples.

And as Htwe Htwe Thein (Curtin University) mentioned during the Economic Update there is the well-studied issue of trust-building. Trust-building will need to start all over again before meaningful and sustainable progress can be made. In the meantime, Myanmar will find itself yet again at the bottom of most development indicators.

What is new in discussions regarding the military coup is the role of the internet, Generation Z, and an overall better networked society. The impact of these factors is the big unknown—and with COVID-19, and a coup, predicting the course of Myanmar’s future may best be put in the hands of the astrologers.

However, in spite of these dire circumstances I believe the resilience of Myanmar’s population will see the nation emerge from these current crises—we just don’t know when or what that will look like.

The Myanmar Update will re-convene in 2023 and we will no doubt be reflecting on some of the conversations and predictions made at this conference. There will be a further publication based on the Update presentations, and it is hoped the more informal presentations from our speakers can be captured, representing as they do a significant time and place in Myanmar’s history. Hopefully in the Myanmar Update 2023 our Myanmar colleagues will again be able to participate openly with the international community of scholars.

The ANU Myanmar Update was supported by the ANU’s College of Asia and the Pacific, and IDRC Canada. Where presenters have given permission videos of the sessions will be available for public access. Some podcasts are already available through Myanmar Musings. https://www.myanmarmusings.com  The conference program is available at https://myanmar.anu.edu.au/myanmar-update/myanmar-update-2021-living-pandemic-and-coup

A graduate workshop will be held in Canberra later this year, timing being very COVID-dependent. IDRC sponsorship will allow the MRC to offer scholarships to Myanmar students currently in Australia to travel to Canberra to attend and help support them with their research and studies at this very difficult time. 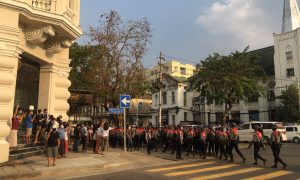 A View from the Borderlands: An Interview with Lieutenant Colonel Tar Parn La

On the current political landscape in Myanmar. 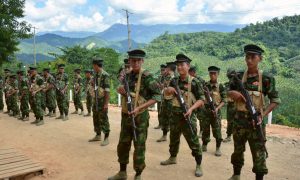 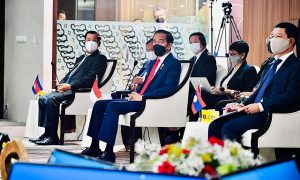