Image credit: Office of the Minister for Foreign Affairs of the Republic of Indonesia

The historic ASEAN high-level meeting in Jakarta last weekend resulted in five points of consensus, including ending violence, opening humanitarian assistance and commitment to start inclusive dialogue. Despite the mixed outcomes the meeting achieved, it is important to note the urgency for providing access for humanitarian assistance to prevent escalating tension and contain the spread of COVID-19 into the neighboring countries.

Noting the situation in Myanmar, attendees finally agreed to a Five-Point Consensus as follow:

The attendance of controversial Tatmadaw Leader, General Min Aung Hlaing to the meeting has drawn harsh criticism, but it’s unavoidable for engagement efforts such as those necessary with Myanmar. In the words of Indonesia’s representative at the ASEAN Intergovernmental Commission on Human Rights (AIHCR), Yuyun Wahyuningrum, it’s necessary to involve all concerned parties to pave ways for peace in Myanmar. She recalled the difficulty of even mentioning the issue at the earlier ASEAN Informal Minister Meeting. “We can’t create a solution if we can’t define the problem. In the previous meeting, we couldn’t even discuss the issue, how could we draw a solution?” she said.

Myanmar has leaned on ASEAN for decades, including when the junta released political prisoners in 2010 and held general elections afterwards. During Cyclone Nargis in 2008, only ASEAN countries were allowed to enter and provide humanitarian assistance for the victims.

Despite the criticisms, it is important to note that the Consensus has opened a pathway for the block’s regional humanitarian body, AHA Centre to provide humanitarian assistance to Myanmar. Since the coup in February, Amnesty International has reported over 700 people killed, including dozens of children. The crisis has additionally prolonged conflicts in most or all-ethnic states, including escalating tensions between ethnic armed organizations and the Myanmar military in Karen, Kachin, northern Shan States and eastern Bago region, which has already displaced over 20,000 civilians. Potential resumption of hostilities in Rakhine and Chin States, where heavy fighting has been occurring between Myanmar military and the Arakan Army since 2019, might be exacerbated. There are around 350,000 internally displaced persons across Myanmar as a result of armed conflicts and 740,000 people fleeing to neighboring Bangladesh as a result of the violence.

The COVID-19 situation means that there is an urgent need for the AHA Centre to expedite its operations, as the coup has wreaked havoc on monitoring, treatment and containment. Myanmar is the largest country in mainland Southeast Asia that shares terrestrial borders with Thailand, India, China, Bangladesh and Laos. It has coastline on the Andaman Sea and the Bay of Bengal, which previously been used as an escape route by Rohingya refugees, who reach as far as Indonesian and Malaysian coastlines by boat.  Unless stringent measures and necessary aid is implemented, COVID-19 containment efforts in Myanmar will have be futile. Failure could be precursor for wider spread of COVID-19 to the neighboring regions.

As an intergovernmental body, the AHA Centre surely needs to coordinate with humanitarian and disaster management bodies from member-countries, which will be detailed in follow-up senior level and technical directions. A travel bubble for the humanitarian mobilizations inside the country and from logistics warehouses overseas will need to be planned for efficient and effective delivery.

Activist Titi Anggraini from Association for Election and Democracy said the consensus is not the end, but rather a beginning. ASEAN has raised the bar for pushing dialogue in Myanmar: it will be a test for ASEAN’s credibility to implement the consensus for real change in Myanmar. 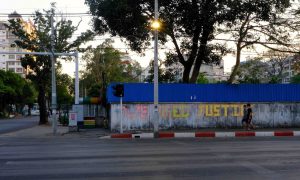 The capacity of R2P is limited, and the decision-making process is fraught with political gamesmanship.